New legislation would include education and training programs 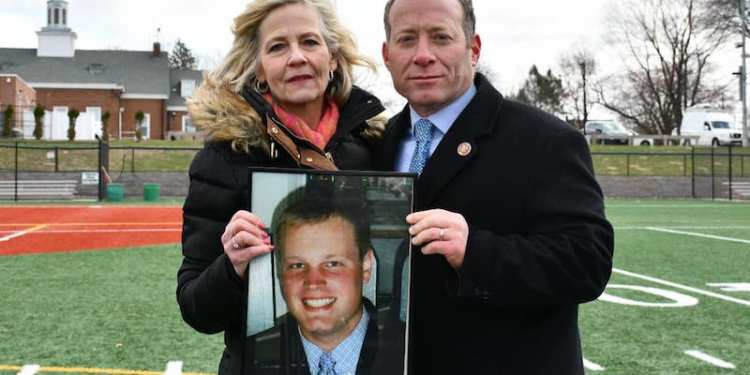 Bipartisan and bicameral legislation sponsored in part by Rep. Josh Gottheimer would seek to combat opioid addiction among student athletes.

“Like every parent, I wish there was a magic bullet to stop addiction and abuse, especially among our children,” said Gottheimer. “Unfortunately, it just doesn’t exist — there’s no turn-key solution. That said, we have learned a great deal about the disease over the years, and what we can do to help stop addiction in the first place.”

Under the proposed bill, the federal grant program would be administered by the Substance Abuse and Mental Health Services Administration (SAMHSA), a branch of the Department of Health and Human Services.

The grant funding would be designated for investment in educational and training programs at the youth, high school and collegiate levels focusing on the dangers of opioids.

“For me, the opioid epidemic is very personal and, especially, the need for education and treatment. On January 4, 2014, I lost my beautiful son Brendan to a heroin overdose. He was 22-years-old and had his whole life in front of him,” said North Jersey resident Gail Cole, the founder of Hope and Healing After an Addiction Death. “Education is the cornerstone for battling this epidemic and preventing anyone from ever starting to use it. Teachers, administrators, coaches, and counselors all need to be educated.”

The bipartisan, bicameral legislation will authorize the Assistant Secretary for Mental Health and Substance Use to invest $10 million annually to support educational programs for students and student athletes, as well as training for teachers, administrators, athletic trainers, coaches, athletic directors, and others specifically targeted at strategies for preventing the misuse of opioids and other substances commonly used in pain management or injury recovery.

Gottheimer noted the legislation would address the signs and dangers of opioid and substance misuses, especially those used commonly in pain management or injury recover.

“It starts with educating our educators, coaches, students, and athletic communities. Athletes tend to be exposed to opioids at a young age due to injury, which can lead to dangerous experimenting and long-term disorders,” said the Congressman. “That’s why I’m leading a bipartisan, bicameral effort to provide federal investment for opioid misuse education and prevention programs — to help address the problems before they start.”

The legislation, sponsored in the U.S. Senate by Jeanne Shaheen (D-NH), would target and train athletic directors, youth sports coaches, school administrators, and other members of the athletic community.

Pressing Issue in the Nation

Gottheimer noted the issue was a pressing one for America, with more than 115 citizens dying every day due to an opioid overdose. Additionally, he cited research that noted students and student athletes were at risk of developing these addictions earlier when contending with a serious injury.

“When it comes to the opioid epidemic ravaging America’s communities, I fight for families like those in my district who have lost loved ones to opioid addiction,” Gottheimer said.