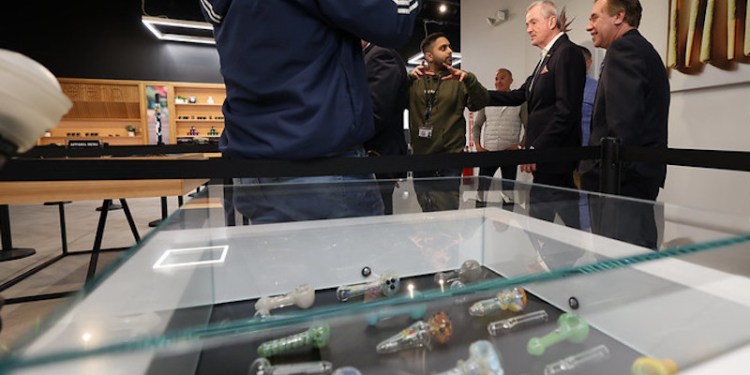 With New Jerseyans are now allowed to legally buy marijuana, North Jersey lawmakers are leading the call to prohibit police officers on or off duty use cannabis-based products.

The issue arose after Acting Attorney General Matt Platkin wrote that off-duty police officers in New Jersey are permitted to consume cannabis products and should not face discipline for doing so under the state’s legal marijuana law.

Platkin sent the memo to police chiefs and directors across the state to remind them departments “may not take any adverse action against any officers because they do or do not use cannabis off duty” and that “an employee shall not be subject to any adverse action by an employer solely due to the presence of cannabinoid metabolites in the employee’s bodily fluid.”

Fulop, in a Twitter thread April 20, wrote that the Jersey City Police Department (JCPD) leadership would issue a directive to the city’s police officers that no matter if off or on duty, smoking marijuana will not be permitted and will result in termination.

“There will be no ambiguity on how JCPD will approach this (and) we will pursue it legally if tested via the federal court system,” wrote Fulop. “Bottom line is trust is fragile between communities/police. It will only take one blood test after a car crash or discharged weapon where an officer tests positive for trust to erode.”

Fulop noted he has been a “staunch” supporter of legalization, making Jersey City the most flexible with regards to legalization for our community but responsible protections for our officer and community is important.

But the mayor stated, “NJ’s policies allowing law enforcement to smoke is an outlier nationally.”

Davis, a retired police officer, offered that “law enforcement officers must be held to a higher standard and I believe that allowing marijuana use by off-duty personnel would lead to lawsuits that would endanger both taxpayers and public safety by making it harder to win criminal convictions.”

Next door to Bayonne and Jersey City, the Newark Municipal Council on April 21 passed a resolution urging Mayor Ras Baraka to issue an order prohibiting city police officers from using marijuana in their off duty.

“Since police are required to carry a firearm both on and off duty, they would be unable to perform their duties under the federal law,” Ramos said. “If and when the federal law is changed, only then should we even begin to consider the possibility of police officers using marijuana.”

Discipline for On-Duty Use

Platkin’s memo makes clear police officers can consume marijuana legally purchased within the state while off duty, but specifies on-duty use can be cause for termination or other discipline.

“To be clear, there should be zero tolerance for cannabis use, possession, or intoxication while performing the duties of a law enforcement officer,” Platkin said in the memo. “And there should be zero tolerance for unregulated marijuana consumption by officers at any time, on or off duty, while employed in this state. The safety of our communities and our officers demands no less.”

Gov. Phil Murphy at a press conference to announce an additional New Jersey State Trooper was steadfast that the state will not allow “anybody to show up impaired, whether you’re drinking or whether you’ve smoked weed. Anybody who shows up impaired would be dealt with aggressively.”

Looking for a solution, State Sen. Paul Sarlo (D-36) said he would push for legislation that would close the loophole when it comes to marijuana use by police officers.

Sarlo, the mayor of Wood-Ridge, said as a “pro-law enforcement Senator, I respectfully disagree (with) directives to allow off-duty police officers to smoke weed. With cannabis remaining in one’s system for 30 days, police will subject themselves to never ending lawsuits & questioning of their judgements.”

“Let me be clear, the directive is a product of the law that was enacted. I am hopeful we can modify the law to match all the other states that have zero tolerance for use of off duty cannabis by police.”

Sarlo has a backer in this approach in Murphy.

“Would I be open-minded to a legislative fix that would address this? The answer is yes,” said Murphy.

But a road block at the state level may be State Senate President Nicholas Scutari (D-22), the author of the bill to legalize marijuana. Scutari in his position has the power to bring to the floor or block any attempt to bring legislation before the full legislative body.

The Union County lawmaker raised concerns on the constitutionality of such a law as proposed by Sarlo. The state does not have a law that prohibits police officers from drinking while off duty, for example.

“You open up this box where you start regulating people’s behavior when they’re on their own time—I think that’s a very dangerous slippery slope that I’m not willing to go down,” stated Scutari at a public event April 18 at Rowan University.

Congressional Candidates Flush With Money to Spend for June Primary