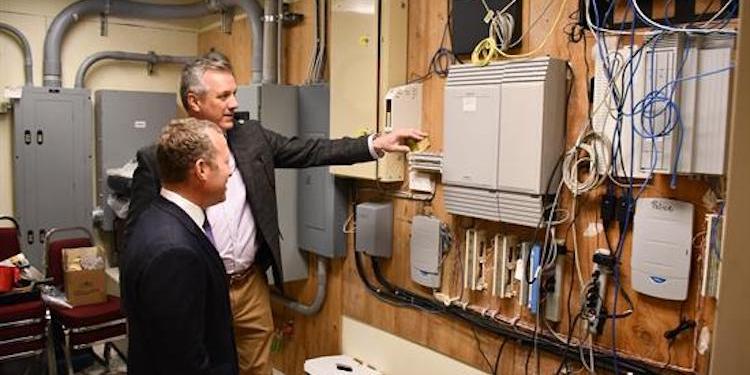 Rep. Josh Gottheimer says residents of Warren and Sussex counties are thirsty for faster internet speeds, but the state of New Jersey isn’t releasing the federal funds he secured to quench their thirst fast enough.

“I think it’s fair to say that here in 2022, not having access to high-speed broadband is like not having water in your home,” Gottheimer said at an April 25 press event he held in Blairstown to highlight the issue in the 5th Congressional District.

Blairstown is in Warren County where Gottheimer said only 46% of households have broadband, according to 2021 data from the Federal Communications Commission and Microsoft. In neighboring Sussex County, the percentage is even lower at 44%.

Gottheimer noted it has been nearly a year since he stood with Gov. Phil Murphy and state and local government officials to highlight the $190 million that he helped New Jersey secure from the 2021 COVID-19 emergency relief package, also known as the American Rescue Plan, to expand and improve broadband access for more rural areas of New Jersey, including in Warren and Sussex Counties.

The problem is that the federal funds allocated to New Jersey “are still sitting in the state’s coffers,” according to Gottheimer.

‘Wrapped Up in Red Tape’

Moreover, he said, appointments still have not been made to the 19-member Broadband Access Study Commission panel, which is charged with ensuring that investments are distributed appropriately.

“It seems like those dollars are wrapped up in red tape. I think we’d all like to get them to work to help get quality, high-speed broadband out to folks,” stated the Congressman.

“I’m asking the state to please take immediate action to release the federal investments clawed back to New Jersey for expanded broadband access here in Sussex and Warren Counties and beyond,” he added.

Two years of grappling with the COVID-19 pandemic made it much clearer that broadband is an “absolute necessity for school, work, telehealth, and seeing friends and family,” Gottheimer said.

Additionally, he cited projections from Ladders, a leading source of professional career news, that 25% of all professional jobs in North America will be remote by the end of 2022.

And Gottheimer noted that in 2021, Fairleigh Dickinson University found in a poll that while 51% of New Jersey workers started working from home during the pandemic, 26% of them say they do not think they will ever go back to the office.

In coming days, the three term lawmaker said he will write to Gov. Murphy and to county officials “reiterating the importance of releasing these federal investments to expand broadband access” in North Jersey.

“For many of our towns, it’s hard to get people and businesses to move here, and that will continue to be an issue until we more fully solve it,” Gottheimer said.

The federal American Rescue Plan package additionally contains the FCC Emergency Connectivity Fund through which federal grants are available to help schools purchase broadband devices such as tablets, hotspots, and routers. Grant applications are due by May 13 and Gottheimer said he is reaching out to schools to make sure they are aware of the funding opportunity.

“The pandemic opened our eyes to the limitations and made us demand better,” said Moorhead. “It is our wish and goal that each and every home and business in our town and beyond will soon benefit from the same quality of broadband service that the rest of the state has been accustomed to for years.”