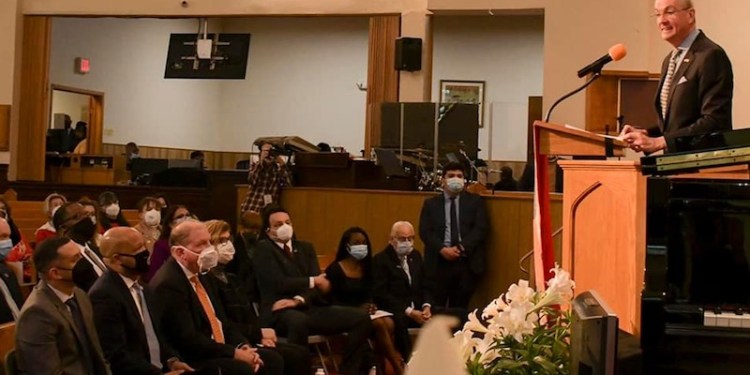 “I hope to work with my Legislative partners to continue making New Jersey a national leader in gun safety and prevent the meaningless violence and loss of life that results from the gun violence epidemic,” he said.

Pascrell noted the U.S. experienced three mass shootings over the Easter weekend, and that the New York City metro area was still reeling from the horrific Brooklyn subway shootings.

Signaling how it would help law enforcement, Pascrell noted the package would make communities safer.

“I joined our Governor in Paterson today because cities in North Jersey want comprehensive gun safety reform. Our neighbors are tired of living in fear. They are tired of thoughts and prayers. They want action,” he said.

A Focus on ‘Senseless Violence’

Cryan opened his remarks crediting Gov. Murphy for the foresight on what had become a national issue regarding ghost guns, saying it was not an easy fight.

He noted in his prior experience as a sheriff, he was exposed to images at crime scenes which impacted his viewpoints on gun violence.

“I’ve been there for adult suicides where people made the decision to put a gun to their temple and end their life, to walk into a room where someone lived with their family and have blood splattered everywhere…that senseless violence that happens when a gun is used irresponsibly,” he shared.

He argued these moments impact both neighborhoods and society as a whole, and said it was incomprehensible that more could not be done.

The legislative package would also work to counter the fact that 80% of guns used in New Jersey came from out-of-state by amending the state’s public nuisance laws to prohibit the gun industry from endangering the safety or health of the public through its sale, manufacturing, importing, or marketing of guns.

“We battle everyday with the flow of out of state guns and the second hand market. By allowing the AG to take action and hold gun manufacturers accountable it is my hope that we can encourage them to do something about the illegal market once and for all,” said State Senate Majority Leader Teresa Ruiz (D-29) in a press statement.

The package of bills Murphy wants considered include requiring completion of a firearm safety course to receive a permit to purchase a gun or receive a firearm ID card; gun owners would be required to store guns in a lockbox or gun safe; banning .50 Caliber Firearms; and establish an electronic mmmunition sales recordkeeping.