Complaints of Anti-Muslim Incidents, Bias on the Rise in New Jersey 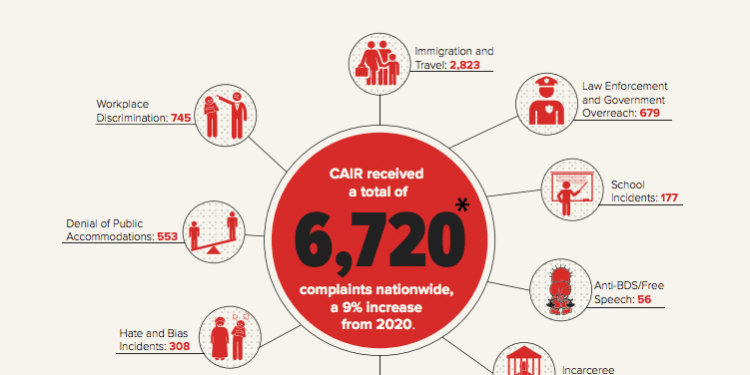 The Council on American-Islamic Relations (CAIR) says in a new report it received its highest ever number of civil rights complaints in 2021, including 104 complaints of incidents against Muslims in New Jersey.

“This is an alarming sign that Islamophobia is persistent and systemic in society and government policy,” said Nihad Awad, the council’s executive director.  “While we recognize that we’ve made progress as a society in terms of addressing social injustices, our report shows that Islamophobia continues to pose the biggest threat American Muslims are facing.”

CAIR is the country’s largest Muslim civil rights and advocacy group. The report, Still Suspect: The Impact of Structural Islamophobia, details 6,720 civil complaints the Washington, D.C.-based group received in 2021—a 9% increase in total complaints since 2020. The complaints involved a range of issues, including immigration and travel, workplace discrimination, denial of public accommodations, law enforcement and government overreach, hate and bias incidents, prisoners’ rights, and school incidents.

Clifton’s Palestinian American Community Center is mentioned in both CAIR’s nationwide report, which highlights many complaints of hate and bias incidents against Muslims around the country. In June 2021, the community center in Passaic County “received multiple violent threats by two separate callers,” the council’s report said.

“One of the callers threatened to bomb the Center and physically and sexually assault the staff. The center received around thirty threatening calls from both callers.”

“CAIR-NJ called on the FBI to investigate bomb threats … CAIR-NJ also called on Clifton police to provide extra security for the PACC,” the report said.

Additionally, the council’s nationwide report details an incident where a high school teacher in Ridgefield allegedly told an Arab Muslim student, “We don’t negotiate with terrorists,” when the student asked for more time to complete his homework.

The teacher reportedly later approached the student and allegedly said, “I didn’t mean it like that.” The incident was reportedly witnessed by the entire class and another teacher.

CAIR-New Jersey provided additional details about the incident in its report.

“I look around in shock,” Mohammed Zubi, the Arab Muslim student, said. “There’s people laughing, and there’s other people in shock. I turn around and ask my friend, ‘Did he really just say that?’ and she said, ‘Yes.'”

In response to the incident, CAIR New Jersey said that it scheduled a Diversity & Cultural Sensitivity training focused on fighting Islamophobia in the classroom for Ridgefield educators. Over 200 educators and administrators in the Ridgefield public school district participated. The training discussed Muslim students’ faith covering Islamic practices and beliefs including religious holidays, prayer, dietary restrictions, misconceptions about Islam, and the meaning of commonly used terms.

“Every issue requires a unique response, whether it’s in Ridgefield or in the senator’s case … (our response) works in favor of the greater good,” CAIR-New Jersey Executive Director Selaedin Maksut said in the report. “It’s making lives better for more than just Muslims in New Jersey. It’s making New Jersey better.”

Maksut’s reference to the senator recalls online comments by State Sen. Edward Durr (R-3), a commercial truck driver and political novice who unseated former Senate President Stephen Sweeney in his 2021 bid for reelection. After Durr’s surprise victory, tweets by Durr from 2019 surfaced where he referred to Islam as a “false religion” and “a cult of hate” and called Islam’s founder, Muhammad, a “pedophile.”

CAIR-New Jersey contacted Durr when the comments came to light and Durr agreed to meet with CAIR members. The group called the meeting “productive” afterward.

“I stand against Islamophobia and all forms of hate and I do commit to that,” Durr said after the meeting, according to CAIR-New Jersey and media reports at the time.

Among the 6,720 complaints, the most common complaints for the second year in a row involved issues around immigration and travel where 2,823 complaints were made to the council.

The council pointed to a 56% increase in immigration complaints, “which may have resulted from both the Afghan immigration crisis in summer 2021 and the increased number of Americans traveling as the pandemic eased.”