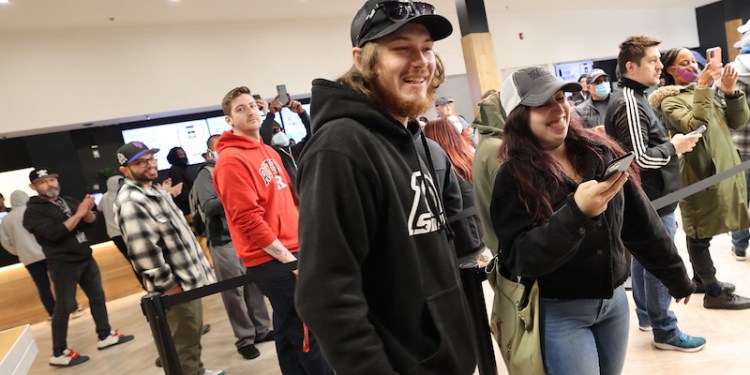 State officials reported the first week of legalized marijuana sales got off to a strong start.

The state’s 12 participating dispensaries sold cannabis and cannabis products to 12,438 recreational cannabis customers for a total gross sale of nearly $1.9 million, according to the New Jersey Cannabis Regulatory Commission.

On the day before adult-use sales began, the alternative treatment centers (ATC) dispensed 5,400 ounces of medicinal cannabis and cannabis products across New Jersey. In the five days following the beginning of adult-use sales, an additional 7,500 ounces were dispensed to patients.

“We expected sales to be substantial and the data shows that the market is effectively serving both adult-use consumers and patients,” said Jeff Brown, executive director of the commission on April 27. “We continue to monitor inventory and access for patients and are prepared to take enforcement action against any ATC that does not meet the requirements for patient access and supply.”

State projections estimate there will be 130,000 cannabis patients and about 836,000 recreational customers from New Jersey—around 12% of the state’s adult population. Another 788,000 “tourism consumers” from outside New Jersey are expected.

The CRC said there were no major incidents at the dispensaries despite the long lines outside the 12 locations. Sales were delayed by the commission due to concerns about enough for medicinal cannabis patients but officials said there had not been any substantiated reports of supply problems.

To ensure medical marijuana patients continue to receive the treatment they need, each of the alternative treatment centers approved by the CRC confirmed their ability to continue providing access to existing patients and prioritized their needs through strategies such as patient-specific hours and parking spaces.

Recreational cannabis and cannabis products are available at dispensaries across New Jersey that already have been serving registrants in the state’s Medicinal Cannabis Program. Voters overwhelmingly passed a referendum in 2020 to allow cannabis products to be sold in the state and Gov. Phil Murphy signed legislation legalizing marijuana in February 2021.

Recreational cannabis can be purchased as 1 ounce of dried flower or up to 5 grams of concentrates, resins, or oils, or 10 100 mg packages of ingestible items in a single transaction.  The cost of one ounce in New Jersey ranged between $320 and $480 in 2021, according to the CRC.

Recreational cannabis is subject to New Jersey’s state sales tax of 6.625%, but municipalities have the option to tack on a 2% local tax to cannabis sales. ATC;s are  required to meet critical social equity standards, including providing technical information to new cannabis businesses owned by individuals who have lived in economically-disadvantaged areas or have had cannabis-related convictions in the past. Seventy percent of the sales tax collected on adult use cannabis sales will go towards communities affected by marijuana-related arrests to further these social justice and equity goals.

New Jersey joined 17 other states and the District of Columbia in allowing the use of recreational cannabis; 39 states allow the use of medicinal cannabis.

Since sales started, North Jersey lawmakers have led the call to prohibit police officers on or off duty use cannabis-based products. The issue arose after Acting Attorney General Matt Platkin wrote that off-duty police officers in New Jersey are permitted to consume cannabis products and should not face discipline for doing so under the state’s legal marijuana law.

“The most important issue is that the attorney general’s office hasn’t come out with its new guidelines for drug testing so technically if I was to test positive for cannabis tomorrow I would still be placed on the national drug registry and still have the probability of termination in my department,” stated Colligan. “So we’re just saying if you want to partake in cannabis, we suggest you hold off until safeguards are put into place.”

But the police controversy has not dampened poll results showing the residents of New Jersey are supportive of the new industry. A Stockton University Poll released April 22 found that a majority of adults would welcome dispensaries selling cannabis in their towns, and half would market it as a tourist attraction.

The poll showed 56% said they would support dispensaries selling legal recreational marijuana in their towns, while 36% would oppose it and 8% are unsure. Additionally, 50% of those who responded were in favor of cannabis related attractions such as lounges and restaurants where weed can be consumed.

Most poll respondents were understanding about the long delay after the 2020 vote—22% said it was reasonable and 50% had no opinion. About one in four (27%) found the delay unacceptable.