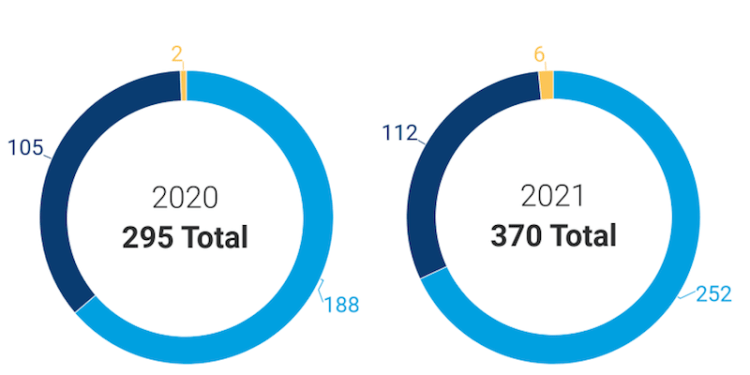 According to new data released by Anti-Defamation League (ADL) this week, reported antisemitic incidents in 2021 rose by 25% in New Jersey, reaching 370 total incidents—the highest number ever recorded by ADL in the state and the second-highest number recorded in any state across the country last year.

“We are alarmed by the dramatic increase in antisemitic incidents in New Jersey…emblematic of a larger national problem,” said Scott Richman, Regional Director of ADL’s New York/New Jersey office serving Northern and Central New Jersey. “Jewish communities in New Jersey are dealing with record levels of antisemitism, and ADL is working closely with victims, schools, law enforcement, elected officials, and faith and community leaders to help reverse this trend.”

Of particular concern were the 44 incidents that took place at Jewish institutions in 13 different counties. Thirty-five percent of all incidents in New Jersey involved the display of a Nazi swastika.

Incidents of antisemitism occurred in 19 of 21 counties in New Jersey. Bergen had the most at 70 incidents, followed by Ocean (44); Middlesex (31); Union (30); and Mercer (39). In North Jersey counties, there were 17 incidents on Passaic, 23 in Morris, 24 in Essex, four in Hudson, five in Sussex and three in Warren.

ADL officials noted 28 of the incidents involved the display of a swastika, and 24 took place at a K-12 school. In one notable Bergen County incident, a man smashed the windows of a doctor’s office with a hammer and asked patients, “Are you Jewish?”

Seven incidents targeting Jewish institutions that involved the display of a swastika. There were five Zoombombings, which targeted Shabbat services, High Holidays services and a shiva. The one assault with a weapon occurred at a Jewish institution, which involved a person attempting to strike a victim with a vehicle in a synagogue parking lot.

Incidents related to Israel or Zionism in New Jersey increased by 35% in 2021, reaching a total of 27 incidents.

Notably, ADL recorded the highest number of antisemitic incidents of 2021 during the month of May, which directly coincided with the escalating conflict between Israel and Hamas in Gaza.

There were 56 incidents documented in New Jersey in May 2021, 86% higher than the state’s average monthly total (30) with 14 included explicit references to Israel or Zionism.

The report noted an incident in Clifton where a sign featuring Nazi imagery was used to condemn Israel at a business establishment. Six of these incidents took the form of White supremacist groups’ propaganda efforts, which attempt to foment anti-Israel and antisemitic beliefs.

“Students across New Jersey deserve a safe school environment, both in person and remotely,” said Richman. “It is disheartening to see the number of antisemitic incidents in K-12 schools bounce back to 2019 levels.”

“Our ultimate goal is helping to create safe and inclusive school climates to ensure that no student suffers from bias, discrimination or hate, and we look forward to continuing our work with educators in New Jersey to help them combat antisemitism and all forms of hate in our schools.”