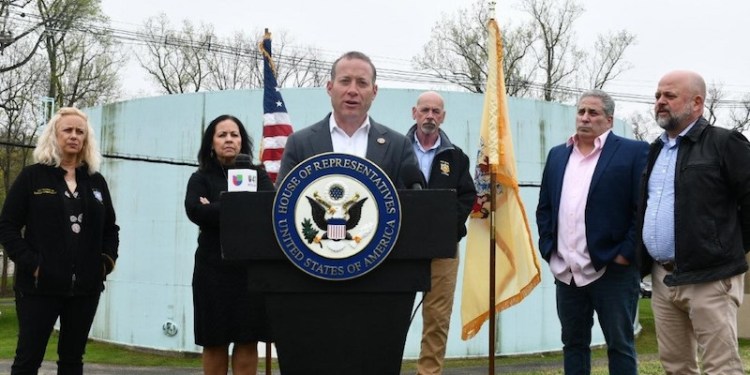 The recent two week recess from Washington was not spent on vacation for Rep. Josh Gottheimer. Instead, he spent the time crisscrossing his district explaining the federal money returning to North Jersey that will benefit municipalities as well as those living and working here.

To that end, the Congressman made stops in Bergen, Passaic, Sussex and Warren counties to promote the resources communities are receiving from the American Rescue Plan (ARP) and the Bipartisan Infrastructure Bill (BIB) that were passed in the last year.

“There are a ton of benefits for the community (as we claw) back tax money back from Washington to Jersey, and making sure we are doing what we can to make life more affordable—that includes lowering taxes,” Gottheimer said. “The more we clawback the less the communities and the towns have to carry on their own.”

Among the stops were at Park Ridge Water Supply to highlight how New Jersey will claw back $1 billion in federal investment over the next five years from the BIB to address critical water infrastructure needs; in Blairstown where ARF funds have been allocated to expanded broadband access in Sussex and Warren counties; a $775,000 federal investment for a new, life-saving, cutting-edge CT scanner at Hackensack University Medical Center’s new Intensive Care Unit ; and hosting a Veterans Resources Fair to connect North Jersey veterans with more than a dozen local, state, and federal agencies and community organizations to access critical resources including health care, employment opportunities, benefits, and education.

“We fought very hard, which is what I always do, to help the district and now we have got to let people know where we have been successful in getting resources back,” said Gottheimer. “That has an impact on making their towns more affordable, getting money for cops and firemen, and infrastructure dollars to fix our bridges and roads.”

But it is at the iconic Jersey diners—”its scientific…taylor ham and cup of coffee and I get interesting feedback from folks”—where Gottheimer said he knows his constituents understand what Democrats are delivering on infrastructure because “everyone wants to get home to their kid at night.”

“The one thing I hear (is) the infrastructure bill really resonated with folks…I think this is a direct issue for folks that they have been talking about for years,” he said. “Because they sit in traffic when they commute and drive around to the city or Jersey…everyone hits potholes that blows out a tire, they see the rebar exposed on the overpass. I think getting the Gateway Tunnel finally moving—which I am very proud of as I helped negotiate and help craft to pass—I hear about that a lot.”

The clawback of money from Washington is a key component of Gottheimer’s affordability plan. He stressed North Jersey getting more federal dollars flowing back helps lower the tax burden on individual towns and communities.

“I think people want to see a return on their investment, they want their taxes to be lower but they do want to know what they send to Washington so that they getting some value from it for their lives. That is a key part of what we are fighting for,” stated the Bergen County lawmaker.

Gottheimer noted policing and hate crimes were “a big topic of conversation” in a recent business roundtable he held with Korean-Americans. He called the recent report from Council on American-Islamic Relations (CAIR) and Anti-Defamation League (ADL) that showed incidents of hate increasing in New Jersey “atrocious.”

“I am pretty emphatic that New Jersey is a ‘No Hate State’ but the numbers we have seen this past week from CAIR and ADL report make you realize that we have got to do everything we can to stop anti-Asian hate, antisemitism which is pretty rampant as the numbers show,” he said. “There is a wave of anti-Asian hate crime in the metro area. It’s horrific. It is on the front of the minds of a lot of Korean Americans and Chinese American families.”

To that end, the Democratic Congressman was hopeful that his bipartisan, bicameral Invest to Protect Act would be passed by this year to help local police departments hire officers and ensure law enforcement has the resources and training they need to keep themselves and their communities safe. Among the backers in the Senate are Charles Grassley (R-IA) and Ralph Warnock (D-GA).

“There’s a huge focus on making sure we fight crime and that law enforcement has the resources they need to protect themselves and protect the communities,” said Gottheimer. “I am hearing about investing in law enforcement, not defunding.”

Funding the police is one of the seven legislative priorities Gottheimer has proposed with Problem Solvers Caucus Co-Chair Brian Fitzpatrick (R-PA) that include supply chain issues, bringing more manufacturing to the U.S., as well as lowering the costs Americans spend on energy and healthcare that should be addressed immediately.

“The biggest thing is that the legislation has bipartisan support that I think can get done. I think the key is what can we get across the finish line,” he said. “I am very focused on affordability overall—lower prescription drug prices, lower gas prices with my above all energy plans—and I am working with the House and Senators to get legislation passed and the White House as well.”

Gottheimer noted a bill allowing the building of more semiconductors in the U.S is currently in conference after passing both the House and Senate. With not a large enough manufacturing base in the U.S., it has caused supply chain issues that were revealed during the pandemic to continue.

“Supply chain issues show we have to manufacture things (in the U.S.) that were clearly essential in the pandemic,” he said. “An F-150 truck has more than a 1,000 chips in it. We see how backed up auto deliveries are because we can’t produce enough chips here.”

“We have to address supply chain choke points overall and boost American competitiveness.”

The common thread in Gottheimer’s eyes is that the proposed legislations are all common sense, bipartisan action that can be passed by both legislative bodies in Washington.

“People when I am home they just want us to fight for things for New Jersey but do not want to see partisanship get in the way of the things that they care about,” he stated. “That is what they hired us to do, to do our job, to put country ahead of party. That is what people expect from us.”

Working Across the Aisle

Bipartisanship can be a hard sell during an election year, but it is one that the three term member of the House believes is a message his constituents want and expect from him.

“I am focused on actually getting things done,” he said. “We have been able to get several pieces of legislation to the floor and on these pieces we are working with Dems and Republicans in the House and the Senate to get them to the finish line. That is what I am focused on and is our way of saying enough delays.”

Additionally, the role of competing and beating China is something Gottheimer says he always has his eye on.

“What is very important to me and drives my work is if we are going to beat China, which we must in the end as they are working overtime to try to dominate,” he said. “They won’t win because we won’t let them….they are betting that can divide us up and I am betting that we are going to stick together, you have people like me that are willing to work with Democrats and Republicans in putting country first over partisanship.”

Gottheimer framed it as a battle with the role of democracy around the world at stake.

“I took an oath to our country. We are much stronger when we work together. China, whether it’s through the media or gaming, has spheres of influence in academia that are trying to impact, get us off our game and divide us,” he stated. “We can’t let them and we won’t let them. But it is only going to work if they think our democracy won’t work and I believe that is why we are the greatest country in the world, our democracy.”

Gottheimer formally kicked off his re-election campaign this past weekend. While he faces no primary opponent and won the general election by six percentage points in 2020, he is determined to tell voters how is delivering for them.

“I fundamentally believe our best days are ahead of us. Does that mean you don’t hit a road bump? Sure, but the focus needs to be what we are going to do about it to get stuff done,” he stated. “We have to remind people what we fought and got for New Jersey and how it is going to help. This is what I have been focused on. Overall affordability—lower prescription drug prices, lower gas prices, supply chain issues because they are waiting a long time to get their car or something they ordered online.”

The 5th District lawmaker added that a key is “making sure we have a strong economic recovery. We are coming out of the height of the COVID pandemic, when Democrats and Republicans came together to help folks. (We have) to ensure we keep our communities safe and costs down, claw dollars back to the district and make life more affordable for them. Those are all the things that I hear about all the time.”