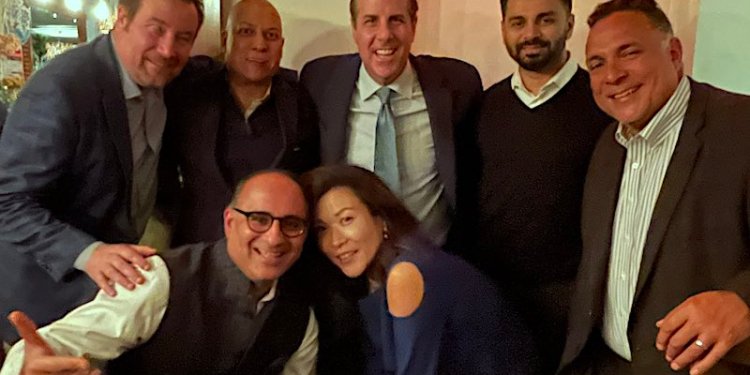 The Republican race to face off against Rep. Josh Gottheimer is now down to two.

Fred Schneiderman withdrew from the race May 5, stating “Due to my first priority, my family, I must hereby withdraw my 2022 candidacy. While disappointing at the moment, I’m confident I’ll again seek and serve elected office.”

He continued that “these are challenging times for our nation and our state.  My desire to serve and to help solve the many problems facing us compelled me to run for Congress. The best part of this experience has been meeting and talking to so many men and women firsthand and listening to their frustrations and aspirations.”

The move leaves Nick DeGregorio and 2020 nominee Frank Pallotta fighting to be their party’s nominee.

The Schinderman decision to suspend his race came on the morning where the three had been invited to a candidate forum hosted online by New Jersey Globe and Save Jersey. But disagreements about the format led to only DeGregorio being interviewed by the two online outlets.

Pallotta—and before he dropped out, Schinderman—said he declined because he wanted an in-person debate that would address voters and the press directly, “without staffers messaging talking points or opponents being muted—so that there could be an active discourse.”

When asked about his absence, DeGregorio chided Pallotta for “a lack of professionalism” during the campaign. The Marine veteran noted at a forum in Sussex County, the candidates running in the 7th Congressional District were cordial with each other compared to what he has seen and experienced from the Pallotta camp.

“I tried to shake the hand of my opponent and it’s almost like you are a ghost,” he said. “I joke that its like an episode of ‘Mean Girls.’…I would encourage Frank not to be scared, let’s debate, let’s get in the arena.”

Over the course of a half hour, DeGregorio answered questions about the best way to handle student debt, U.S. foreign policy including Ukraine and revisiting how foreign aid is allocated, the role of federal government in an Americans life, regulating social media, health and sexual education, abortion, gas prices, 2020 presidential winner, election integrity, funding the police, repealing the state and local tax (SALT) cap, would he vote for Rep. Kevin McCarthy for Speaker of the House, and should Congress investigate the COVID response.

Schneiderman exited the race without backing either DeGregorio or Pallotta, stating “I believe I am the most qualified Republican candidate to tackle inflation, immigration, energy and other major issues confronting our nation. I also believe I am the best candidate to defeat the Democratic incumbent this November.”

Schneiderman entered the race and drew immediate attention for his campaign operatives. Former Trump campaign and White House advisor Kellyanne Conway was directing his campaign along with Larry Weitzner of Jamestown Associates, one of the top Republican media firms in the nation.

While first on the air with television ads, Schneiderman did not attempt to win the county lines that went to DeGregorio in Bergen and Pallotta in Passaic and Sussex. The most recent campaign financing report showed Schneiderman had raised $279,842, but more than half of it from a personal loan.

Schneiderman claimed his strategy of not concentrating on party convention votes and going direct to primary votes—“putting people over politics”—was working. But the Cresskill businessman’s candidacy never really gained any momentum.

“The support I received in just the last month confirms my belief that my three decades of business success and my heart for people would make me a truly impactful elected official of and for the people,” he said.

The Bergen County resident said he will “regroup with great determination and assess where and how I can best serve our nation going forward and which position I will seek in the 2024 election.” Speculation has centered on a challenge to Sen. Bob Menendez.