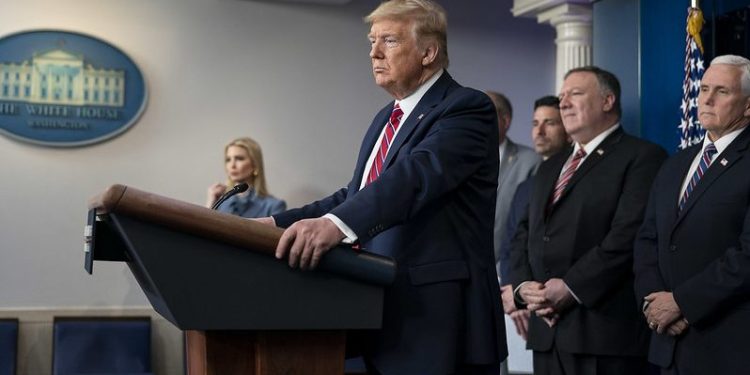 A recent poll from Fairleigh Dickinson University (FDU) sought to answer a question that has loomed over American politics since November 2020: What is the crossover between those who believe the Presidential election was stolen from Donald Trump and other conspiracy theories.

None of those theories have been as accepted as the belief that there was a massive conspiracy involving Republican and Democratic elected officials to steal the 2020 US Presidential election. Forty percent of Americans think it is “somewhat” or “very” likely that Trump actually won the 2020 election, including 72% of Republicans.

“Conspiracy thinking is a mindset and believing that the 2020 election was stolen requires that you move away from listening to neutral experts and paying attention to evidence,” said Dan Cassino, a political psychologist at FDU and the Director of the Poll, in a press statement released with the survey May 5. “It turns out that once you’re in that mindset, you’re more likely to believe just about anything.”

Rather than delve into what leads people to hold this belief, the poll looked at how thinking that the 2020 U.S. Presidential election was stolen leads people to other beliefs. The set of beliefs and practices that lead people to ignore evidence and doubt experts in favor of dubious claims about the 2020 election could easily lead them to embrace other false claims.

But while it is easier to laugh off Big Foot and flat Earthers, conspiracy theorists’ views have had real impact when it comes to the origin of the coronavirus and the vaccines developed for it. Americans who believe that the 2020 election was stolen are more likely to say that the other false beliefs mentioned were likely to be true. In addition, Republicans who were first asked about the 2020 election were more likely to endorse many of the other false theories.

“Making people think about conspiracies regarding the 2020 election doesn’t make people more likely to think that COVID came from a lab,” said Cassino. “Most likely because the people prone to think that are saying it’s true already.”

In the survey, Americans were asked about a number of statements that experts have said are false. For half of the respondents, this series began with a question about whether former President Trump really won the 2020 election. The other half received one of the other items, randomly selected, first. Pollsters found asking about the discredited belief that the 2020 election was stolen makes Republicans more likely to think that other conspiracies are actually true.

Such as the questioning of vaccines. Despite proof that childhood vaccines cause autism has been widely debunked, 2% of Americans think it is “somewhat” or “very” likely to be true. That percentage rises to 37% among the belief is much more common among those who think that the 2020 election was “very likely” stolen (48%) than those who don’t (21%).

Cassino argued that while reliable national polling about beliefs that appear absurd are rare, but the finding by FDU show it is necessary to find out what Americans really believe.

“We think of misinformation as a political problem, but it’s much more than that,” said Cassino. “It might be useful for political leaders to have people believe things that aren’t true, but that spreads far beyond politics, and we wind up with people thinking that they could fall off the edge of the planet.”

According to the FDU survey, 22% of Americans say that Bigfoot is at least somewhat likely to be real, and 11% say that the Earth might be flat, but those figures are higher among those Americans who believe that the 2020 election was stolen.

For instance, Democrats and Republicans are equally likely to believe that creatures known as Bigfoot or Sasquatch exist in the woods of the Pacific Northwest. Twenty percent of Democrats say that it’s “somewhat” or “very” likely to be true, compared with 19% of Republicans (and 22% of Americans overall). Younger Americans are much more likely than older ones to believe that’s it’s true.

Those Americans who think it’s “very likely” that the 2020 election was stolen are seven points more likely to believe in Bigfoot than those that don’t (21% versus 28%) but it’s not just because they’re more credulous in general. When the series about conspiracy beliefs starts with the question about the 2020 election, Republicans are 6 points more likely—23%/17%—to say that Bigfoot is “somewhat” or “very” likely real. There is no significant effect of this ordering among Democrats.

“Even the wildest theories about the 2020 election don’t include Bigfoot,” said Cassino. “But people are really trying to be consistent, and so endorsing one set of false beliefs makes them more likely to endorse another, even if it’s pretty far out there.”

The same pattern holds even for flat Earthers. About 11% of Americans believe that this is “somewhat” or “very” likely to be true, The figure includes 17% of those who think that the 2020 election was stolen compared to 9% who don’t think that was “very likely.” When Republicans are first asked about 2020, though, 13% of them say that the Earth is “somewhat” or “very” likely to be flat, compared to 9% otherwise.

FDU pollsters said the belief that the Earth is flat has its roots in some literal readings of the Bible popular among Evangelical Christians and largely spread through many of the same vectors as the belief that Trump won the 2020 U.S. Presidential election, such as  internet postings and sites like YouTube.

The most common belief is the Earth is surrounded by an ice wall that prevents individuals from seeing the edge of the planet, and that world governments have been keeping this information from the public for hundreds of years.

“People believing that the Earth might be flat sounds like a punchline,” said Cassino. “But the fact that so many people are embracing a conspiracy mindset that can push them that far is really upsetting for anyone hoping that facts will eventually win out.”