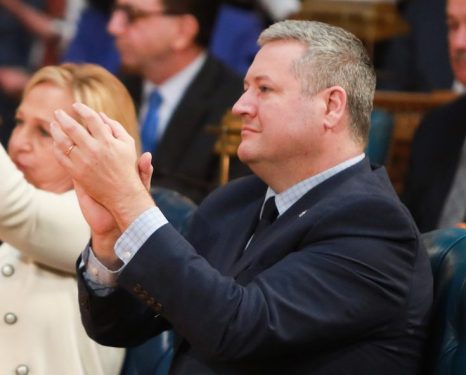 After the publication of a report saying New Jersey failed to award disabled veteran-owned businesses under statutorily required state contracts, Assemblyman Brian Bergen (R-25) had choice words for the state: “it is completely unacceptable.”

The report, published by the Garden State Initiative (GSI)  and New Jersey State Veterans Chamber of Commerce, investigated whether New Jersey agencies were making good on a 2015 law that set aside 3% of budget for Disabled Veteran Owned Businesses (DVOB).

The report found just two of the 72 eligible state agencies were enforcing the law, and none were reporting their numbers legally as required.

“New Jersey state agencies are mandated to do business with veterans turned entrepreneurs, but they have not lived up to their so-called commitment. It is completely unacceptable and I’m calling on state leaders to join me in making consequential changes,” said Bergen, who served as an Apache fighter pilot during Operation Iraqi Freedom.

“For the past seven years, veteran-owned businesses have lost out on millions because of empty promises and failed policies.”

“This report shows there’s been a complete failure of state bureaucracy. We have a sacred obligation to support our veterans when they return home from military service and this report offers a path forward for our state to keep that commitment,” said GSI president Regina M. Egea.

Although the report focused on the failures of the state, it also provided a variety of initiatives that could improve veteran-owned businesses in the state.

Among the strategic initiatives detailed in the report are:

Calling on the State to Improve

Bergen argued Gov. Phil Murphy’s decision to deflect comment to the Treasury Department was not enough, saying the state had to uphold its statutory commitments.

“A better response would have been to say he is creating a task force to ensure New Jersey is meeting its legal requirements and improving procurement rates for veteran businesses,” Bergen said. “I am urging the governor to support this initiative.”

“I want to make New Jersey the best state for veterans to start a business after they complete their service to our country. Whether it is through legislation or leadership, I will work with my veteran communities and colleagues to make sure state government is working for those who selflessly fought for our freedom,” he said.