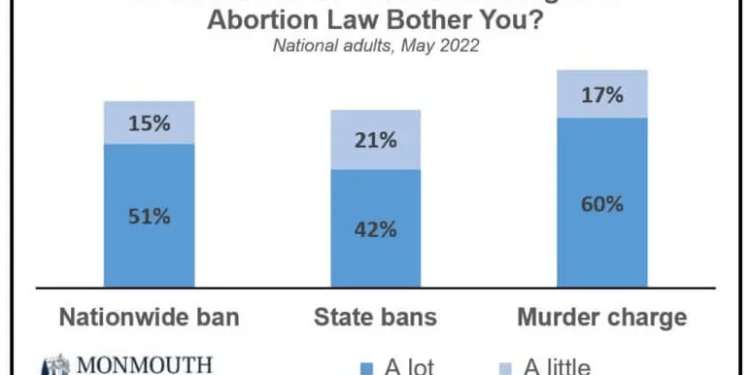 The first nationwide poll since the leak of the draft decision seen as overturning Roe v. Wade finds a stable majority supporting legal access to abortion and letting the precedent stand.

The Monmouth University Poll released May 11 showed Americans expects the decisions will lead to a system of abortion laws where Blue States are expected to protect abortion access with Red States banning or severely restricting abortion. A majority of the public would be very upset if laws banning abortion included felony murder charges for the woman or her doctor.

A significant majority of respondents support keeping the procedure legal—either always legal (33%) or with some limitations (31%). Another 26% say it should be illegal except for rape, incest or to save the mother’s life. Eight percent are of the belief that it should always be illegal no matter the circumstances.

“Some state legislatures are already making moves to add felony murder charges to pending abortion restrictions. It is not a scenario most Americans are comfortable with,” said Patrick Murray, director of the independent Monmouth University Polling Institute.

But consensus on what can be done on the federal level on how to protect a woman’s right to choose is not found, according to the Jersey Shore polling outfit. If Roe is overturned, 44% of the public would like Congress to pass a law allowing abortion nationwide and another 43% prefer to leave abortion law up to the states. Only 9% actually want a national ban. Most Democrats (75%) want a national law allowing abortion and most Republicans (63%) want to leave abortion law to the states.

Forty five percent answered their own state would be likely to allow unrestricted access to abortion through at least the first trimester if Roe is overturned. Another 20% think their state would impose significant limits on abortion and 24% believe their state would completely ban the procedure.

A majority of respondents believe at least one-fifth of all U.S. states will completely ban abortions—28% say between 11 and 20 states will do this and 41% say this number will be more than 20.

There are few gender differences on abortion opinion within partisan groups except for the potential for abortion law to include murder charges. Forty one percent of women who are Republican or lean toward the GOP would be bothered a lot by this type of law compared with 26% of Republican men who would feel the same. Younger adults under the age of 35, who tend more than others toward seeing themselves as Independents, are more likely than older Americans to be bothered by these possible outcomes, especially the prospect of a nationwide abortion ban.

Asked about the direct impact of Roe being overturned, 15% say it would impact them a great deal and 14% say somewhat. Conversely, 53% feel they will not be impacted at all and another 16% do not expect much impact. Women (36%) were more likely than men (23%) to say they and their family will be impacted by these changes.

What Action to Take

“Democrats are up in arms about the possibility of overturning Roe, but it is not yet clear how deep these emotions run beyond the active base. Will people who say this decision doesn’t directly affect them be spurred to action? The answer may depend in part on whether they fear overturning Roe will cause other dominoes to fall,” said Murray.

Turning to the other party, 40% responded Dems devote too much effort to abortion issues, 34% say they do not give enough effort to these issues, and 22% say they give the right amount of effort. These results are also similar to 2019, but with a seven point increase among those saying the party is not doing enough.

Among those who identify as Democrats themselves, 50% currently say politicians from their party are not devoting enough attention to abortion issues—up from 34% who said the same three years ago.