“Your body belongs to you. I do not know how to be more clear.” 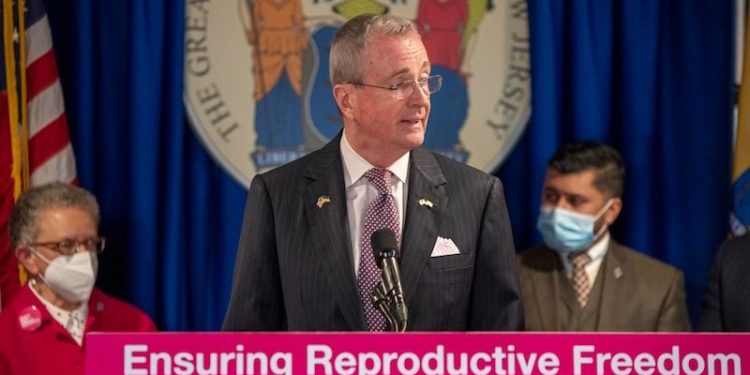 Declaring that “we simply will not go backwards,” Gov. Phil Murphy said he will renew efforts to secure abortion rights and bolster access to reproductive healthcare in New Jersey.

At a press conference on May 11, Murphy announced his intentions to move legislation that will protect and expand coverage as well as  protect medical providers and patients who provide or receive abortion care in New Jersey from legal retaliation by states who have outlawed or restricted abortion. The bill would expand on the that the Freedom of Reproductive Choice Act he signed earlier this year in Teaneck, codifying a woman’s right to choose into state law.

“At that time, there were also some who claimed we were being alarmist and that the Supreme Court would never overturn Roe v. Wade. That was five months ago,” Murphy said. “Abortion is healthcare and healthcare decisions should be left up to the individual. Your body belongs to you. I do not know how to be more clear.”

Murphy and his backers said the proposed legislation will reintroduce aspects of the original bill draft that were dropped before the final act signed into law. Items include providing equitable access by requiring private insurers to provide coverage for abortion without cost-sharing and codifying into state into recent regulatory changes to expand New Jersey’s pool of potential abortion providers to include advanced practice nurses, midwives, and physician assistants.

“We refuse to go backwards on this critical issue and, today, our state moves forward in working to secure reproductive rights and ensure access to the reproductive health care every woman deserves,” said the governor.

A Matter of Equity

For Assemblywoman Mila Jasey (D-27) the additional protections are a matter of equity.

“Equity demands not just the availability of services, but access to those services, and it cannot be predicated upon the size of one paycheck or the scope of available insurance coverage,” said Jasey, one of the sponsors of New Jersey’s legislation. “By taking this most necessary next step, we will really, truly give all the women of New Jersey the right and the power to make the most crucial and important decisions, free from governmental interference and financial considerations.”

No Cooperation with Other States

Murphy made clear as well that as other states prepared to criminalize abortions, his administration is prepared to take steps to protect those seeking or providing abortions in New Jersey from legal retaliation. Under the bill, public entities would be prohibited from cooperating with interstate investigations into the provision or receipt of reproductive healthcare.

The legislation will establish a way to allow a person in New Jersey who is successfully sued in another state for their involvement in reproductive healthcare to file suit to recover damages resulting from that initial lawsuit.

“I hope this proposed legislation makes our position in New Jersey obvious and…brings relief to anyone in another state who needs to come to New Jersey for necessary and safe healthcare,” Murphy said. “We understand the threat that restricting abortion care poses to so many, (pushing) pregnant individuals outside of the medical landscape and places them in danger of surveillance, punishment, and criminalization.

“No one should be criminalized for getting the care they need.”

What is not clear is if the legislation will pass either chamber in Trenton. Besides the expected push back from Republicans, notably by their absence in making the announcement were State Senate President Nicholas Scutari (D-22) and state Assembly Speaker Craig Coughlin (D-19). For example, the were both on hand on the first day of sales for legalized marijuana in the Garden State.

While both issued a statement saying would “continue working to protect access and ensure no woman is stripped of her right to choose,” their comments were not part of the press release from Murphy that had a long collection of lawmakers quoted, including State Senate Majority Leader Teresa Ruiz (D-29), State Sens. Sandra Cunningham (D-31), Nellie Pou (D-35), and Gordon Johnson (D-37) as well as Assembly members Raj Mukherji (D-33), Benjie Wimberly (D-35), Shavonda Sumter (D-35), Angela McKnight (D-31), Ellen Park (D-37) and William Sampson (D-31) among others.

Murphy was passionate in addressing the need to protect a woman’s right to choose in light of the initial draft majority opinion written by New Jersey native Justice Samuel Alito leaked last week that would strike down what was considered settled law and return the issue back to the states to decide.

“Today it is clearer than ever that in the coming weeks, a right-wing majority on the Supreme Court likely will take a wrecking ball to 50 years of its own precedent and for the very first time, overturn a decision in order to diminish our rights,” he stated. “A person’s ability to access abortion care should not depend on how much money they make. If we’re going to guarantee the right to an abortion, we need to guarantee access to an abortion.”