OPINION: Abortion A Fight for Whose Rights Matter Most 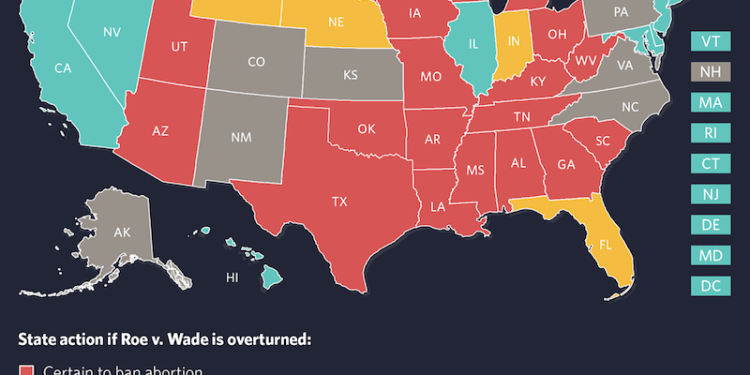 At least 23 states have pre-Roe v Wade abortion bans still on the books or have passed so-called trigger laws that would sharply limit access to the procedure if Roe were to be overturned.

Louisiana legislators attempted to classify abortion as a homicide, trying to go further than anti-abortion measures in other states by making it possible for prosecutors to bring criminal cases against women who end a pregnancy.

And just as Rep. Tom Malinowski predicted, Republicans are gearing up for a push to make it a national ban.

“Just take my state of North Dakota. Having a North Dakota child killed in the womb in Fargo versus Moorhead, Minnesota, you know, on the other side of the Red River — I don’t find a lot of solace in that just because it didn’t happen in my state,” said Sen. Kevin Cramer (R-ND). “I think you could expect that pro-life activists would push for federal protections. I mean, I wouldn’t take that off the table.”

First let’s make this definitive statement: The draft ruling in favor of Mississippi’s attempt to ban most abortions after 15 weeks of pregnancy is wrong. Women should have the right and access to choose what they want to do with their bodies,

But of equal concern is the rolling back of precedents, such as the one established by Roe v Wade nearly 50 years ago.

This ruling is just a beginning for the GOP, a party that will attempt to use every lever it can to maintain power across the U.S. Look at the makeup of the U.S. Supreme Court currently: this decision is being made by a conservative majority packed with three Trump appointed judges in which two (Neil M. Gorsuch and Amy Coney Barrett) were installed by Sen. Mitch McConnell in ways that rile Democrats to this day.

The Alito Draft will conceivably go down in history as the first step that Republicans made in rolling back equality gains for minorities and gay rights. We are fearful that this ruling will start court battles that continue to divide us as a nation, such as the 2015 Obergefell v. Hodges ruling that guaranteed to same-sex couples the right to be married.

What we wish for is pro-life supporters to fight as feverishly for a fetus after birth than before, including parental paid leave after the birth of a child, healthcare that includes access to affordable birth control, and expanded childcare at rates that do not make parents have to choose between staying home or resuming their career. Those are actual actions that truly put a child first.

From a legal standpoint, the forthcoming decision in the Mississippi case is ultimately about whose rights are most important, state’s rights or an individual’s, and how do we uphold them as a nation. To achieve their goals, the Republican majority on the Supreme Court plan to overturn a ruling reaffirmed as late as 1993 in Casey v Planned Parenthood. GOP lawmakers will praise a ruling made by something they have campaigned against in their stump speeches for years—activist judges.

Unfortunately, we see more of these fights to come that will further polarize our nation and make it harder to bring us together. The ruling will open the door for lawmakers to take more extreme positions instead of looking to forge policy that will benefit all Americans.

Bucco: Return All MVC Services for Seniors, Persons with Disabilities