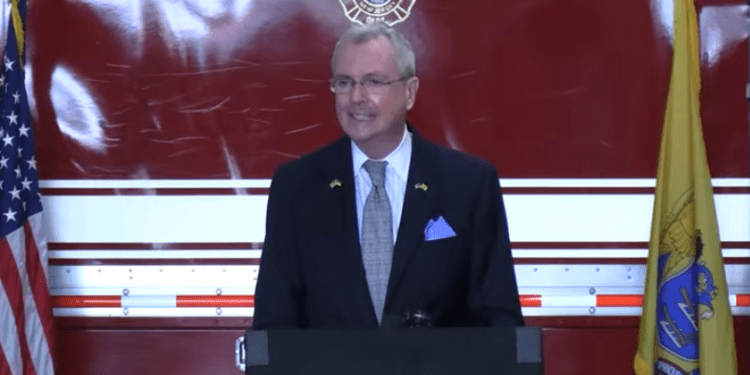 Gov. Phil Murphy did not hold back about those he holds responsible for the mass shootings that plagued the U.S. the past weekend.

“Cue the expected and pitiful expressions of ‘thoughts and prayers’ from those held so powerfully in the grip of the gun lobby,” said Murphy in Hackensack May 16 to announce new federal investment for New Jersey first responders along with Rep. Josh Gottheimer.

Murphy aimed his ire at those he sees as political profiting from extremist talking points.

“As it pertains to Buffalo, cue the hurried backpedaling from the right-wing talking heads and politicians who have so freely and openly peddled the garbage “replacement conspiracy”—I can’t bring myself to call it a theory— and who can’t possibly believe that the words they’ve poisoned our airwaves and rotted our civic dialogue with could actually come home to roost,” he said.

“I think every single one of them knows where they can shove their ‘thoughts and prayers’.”

Murphy described the Buffalo shooter as being “pumped full of racist and nationalist conspiracies.”

The governors comments come in the wake of a weekend that saw more than 20 people shot in Milwaukee, WI, where basketball fans were gathered outside an arena for the NBA playoffs; one killed and five wounded at a church in Laguna Woods, CA; two dead and three wounded at a flea market in Houston; and in Buffalo, New York, where an 18-year-old White supremacist targeted Black residents doing nothing more than shopping for their groceries, shooting 13 and killing 10.

A leading advocate for gun safety legislation, Murphy last month offered his latest round of gun safety bills he wants considered include requiring completion of a firearm safety course to receive a permit to purchase a gun or receive a firearm ID card; gun owners would be required to store guns in a lockbox or gun safe; banning .50 Caliber Firearms; and establish an electronic mmmunition sales recordkeeping.

“Here in New Jersey, where I am proud of the stands we’ve made for gun safety, I call again on the Legislature to pass our Gun Safety 3.0 package of legislation to not only make it harder for guns to fall into the wrong hands but to give law enforcement greater tools to protect communities,” he said.

Putting Gun Control on the Ballot

But the Democratic governor in the first year of his second term pushed that it is past time for outrage and action from the federal government.

“We can prevent it at the ballot box by electing candidates at every level—but especially the House and Senate—firmly committed to commonsense gun safety,” he said. “This is the time to say where you stand. There can be no safe place for any candidate or any elected official seeking wiggle room on guns to hide.”

“Again, it is well past time for Congress to step up and pass real nationwide gun safety legislation,We can prevent it. We can prevent by committing to passing strong laws.”

Murphy was forceful in his address that the U.S. continues to relive the satire headline of The Onion, ‘No Way To Prevent This, Says Only Nation Where This Regularly Happens,’ he finds unacceptable.

“Wiggle room is how we end up with 16 dead Americans in one fitful weekend—more than half of whom were targeted just because they were Black,” he said. “This is another mournful week in America.”