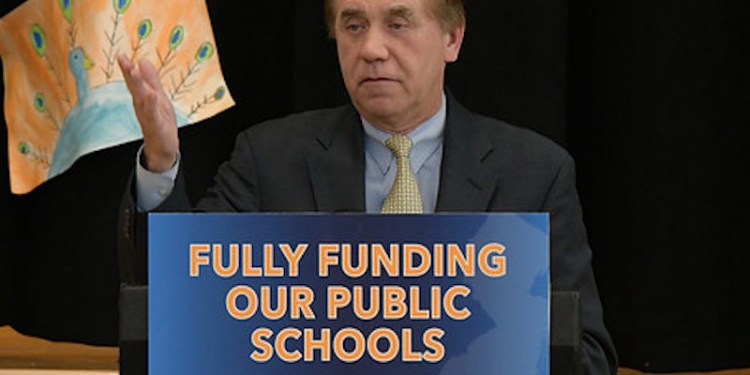 One of the most powerful lawmakers in New Jersey stated he will not pass a budget this year without tax relief for Garden State residents.

Assembly Speaker Craig Coughlin’s declaration came after both the State Senate and Assembly budget committees were told on May 16 that New Jersey’s tax revenues are about $7 billion over what Gov. Phil Murphy projected just two months ago.

The instance from the Assembly Speaker came as the Murphy Administration and nonpartisan Office of Legislative Services (OLS) both forecasted billions of dollars more in revenue incoming to New Jersey. For Fiscal Year 2022, Treasury officials are projecting $4.5 billion more, for a total of $51.4 billion. For Fiscal Year 2023, they are projecting $3.3 billion more, or $50.6 billion in all.

Meanwhile, OLS increased its revenue forecast by $3.6 billion over the same two years. If those estimates are borne out, the state would have nearly $7.0 billion more in tax revenue than what the Murphy administration initially estimated in March.

Officials said the projections are based on strong tax collections overall but “an unprecedented April surge” in income taxes.

Martin Poethke, director of the state’s revenue and economic analysis office, said in State Senate Budget testimony that he had “never seen a period like the last two years…The growth rates and the turnaround in the revenue forecasting has been stunning.”

“In sharp contrast, after the Great Recession it took the state seven long years just to return to the pre-recession revenue peak. Today we haven’t just returned to the pre-pandemic peak or trend, we have soared $8.8 billion above the pre-pandemic trend line. There is no precedent for this,” said Deputy Treasurer Aaron Binder, delivering testimony on behalf of State Treasurer Elizabeth Maher Muoio who tested positive for COVID-19 last week.

Binder offered that the Murphy Administration would work with Trenston lawmakers to use the additional revenue boost to provide greater property tax relief, more funding for debt reduction, and to build up the state’s surplus in the face of a potential economic downturn.

Murphy in his budget previously proposed allocating $4.2 billion in a surplus fund, $1.3 billion in to pay off debt and support capital construction, and $3 billion for his ANCHOR property tax rebate program.

But Republicans even before the increased revenues were announced were looking for money to be directed to the pocketbooks of residents who are feeling the effects of inflation.

“When New Jersey families are struggling with soaring prices and inflation, we believe Governor Murphy must commit to giving back these overcollections immediately to families that are suffering today. We plan on expanding the ‘Give It Back’ rebates that Senate Republicans have already proposed,” said said Senate Republican Leader Steven Oroho (R-24) in a press statement May 10.

Among the the initiatives GOP lawmaker are pushing is a tax rebate returning $1,000 back to New Jersey families as soon as it’s enacted and a $500 tax rebate to counter record-high gas prices.

“We ought to give these over-collections back to the taxpayers of the state of New Jersey. And I mean billions and billions of dollars, not just a few bucks for a marriage license or a driver’s license,” he said.

Dems stressed that there needs to be a plan for the future when the state’s economic fortunes are not so rosy.

State Senate Budget Chairman Paul Sarlo (D-36) noted on social media after the hearings the state needed to be prepared after Treasury and OIC officials warned lawmakers of a coming economic downturn. They pointed to sales tax growth that slowed in April and the first quarterly income tax payments paid in April declined by 24%.

Sarlo offered the objectives of giving immediate relief to taxpayers and planning for a future downturn can be achieved in the same budget.

Coughlin echoed Sarlo’s call to do both as he stated while there are “reasons to be cautious on the horizon, we will also make sure to leverage our surplus so we are ready to weather any storm coming our way.”

The Assembly speaker stated he is prepared to work with legislative leadership and the Governor to deliver a budget before the June 30 deadline that delivers for the people of New Jersey.

“This welcome news is made possible because we have made the difficult choices over the last five years to place New Jersey back on the road to fiscal health, and we will continue to make responsible decisions in this year’s budget,” he said.