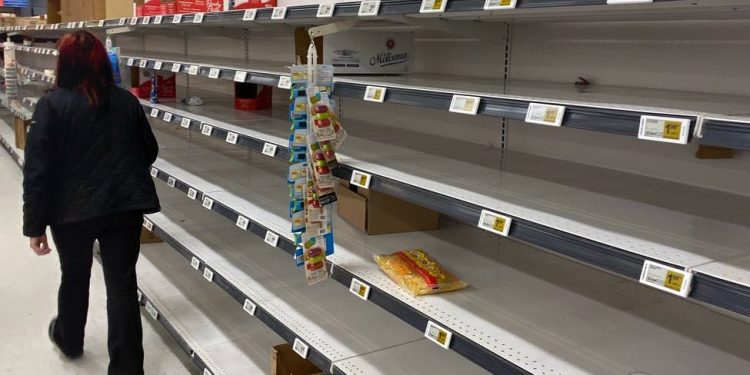 Photo by WeStarMoney on Pexels.com

Gov. Phil Murphy declared a State of Emergency May 17 to help families having difficulties due to the nationwide baby formula shortage that includes activating state price gouging laws.

Murphy said during a television interview Tuesday that the price gouging law prevents retailers from charging more than 10% of the cost of formula and the moves were made to ensure everything in his administration’s power is being done to help residents access the formula they need.

“It’s gonna be a tough situation here for a period of time and we want folks to know we’re here for them,” said the governor. “From today forward, as long as that state of emergency is in place, folks can’t raise prices any more than 10%. That’s the maximum.”

The order on May 17 came out the day after the Food and Drug Administration (FDA) on May 16 reached an agreement with Abbott Laboratories on the steps needed to reopen the company’s shuttered baby formula plant, which could begin to ease the shortage of infant formula nationwide.

The FDA said it expected Abbott to restart production in about two weeks at its Michigan plant and could translate to more formula on shelves in six to eight weeks. The company said it will continue flying formula in from a plant in Ireland.

Additionally, U.S. health regulators took steps to allow more foreign baby formula on American shelves, easing rules that had effectively prevented shipments from many overseas manufacturers. Easing the import rules could add to formula supplies, according to supporters, by allowing manufacturers overseas that haven’t been able to ship their products to the U.S. access to the market if they can meet the FDA’s adjusted requirements.

The move could allow domestic manufacturers of formula destined for foreign shelves to sell their products in the U.S. The changed guidelines are a temporary measure valid for the next 180 days.

Besides FDA action, House Democrats on May 17 proposed an emergency funding bill that would give the FDA $28 million to address a nationwide infant formula shortage. The measure is intended to provide the agency with the funds to increase staff in charge of inspecting formula before it is sent to grocery shelves, as well as money to prepare for future shortages.

As for New Jersey, invoking the state of emergency will aid in cracking down on price gouging in the Garden State. The executive orders makes it illegal to excessively increase the pricing of a merchant’s supply of baby formula under the Consumer Fraud Act. The activation of the law enables the Division of Consumer Affairs (DCA) to investigate reports of potential price gouging and take action to curb such predatory practices.

“We firmly believe that New Jersey is the best place in the nation to raise a family, and during this challenging time, we want to support our families with all of the resources at our disposal,” said Murphy in a press statement. “ To any retailer who may try to take advantage of vulnerable families during this shortage, let me be clear that this reprehensible action will not be tolerated.”

DCA will continue to monitor the marketplace for other predatory and unlawful practices, including the sale of expired or unauthorized formula.

“We want businesses and consumers to know the price gouging law is now in effect to ensure baby formula is not excessively priced anywhere it is offered or sold in the state,” said Acting Attorney General Matt Platkin. “Individuals or merchants looking to make a profit by violating the law during the current state of emergency will face severe penalties.”

Under the order, all state departments and agencies are authorized to take steps—such as issuing waivers, orders, directives, or emergency regulations—to help ease supply chain issues in regards to formula, limit actions that would reduce the availability of formula, and draw on federal resources to accomplish these goals.

In the statement put out by the governor’s press office, it said Murphy had spoken with the leaders of two major baby formula companies with a presence in New Jersey that have committed to increasing production capacity to emphasize the critical nature of the current situation and offered any assistance the state could provide.

Additionally, the New Jersey Department of Health is taking steps to ensure equitable access to formula during the shortage, especially for low and moderate-income families. The New Jersey Supplemental Nutrition Program for Women Infants and Children (WIC) recently applied for a federal waiver that allows program participants to exchange their recalled formula at the store, like any other customer and allow for the flexibility to shop at multiple different stores if their regular store does not have the supply of formula they need.

In anticipation of certain formulas being more difficult to obtain than others, WIC recently instituted formula substitutions so that program participants can replace their special formulas with other types of formula, as dictated by their doctor.

The program is currently preparing to apply for two additional federal waivers the state is now eligible for—one of which would allow participants to receive a different brand of formula without needing a doctor’s note.

The other waiver would further allow WIC participants to receive different forms and sizes of formula than they normally receive.

“The Department of Health remains committed to ensuring that families participating in the (WIC) program can access the nutritional support and resources needed to care for their infants,” said Persichilli. “Feeding your infant during this shortage can be stressful. If you are in need of emotional support, your local maternal health consortia can connect you with counseling services, virtual support groups, and other resources you may need.”