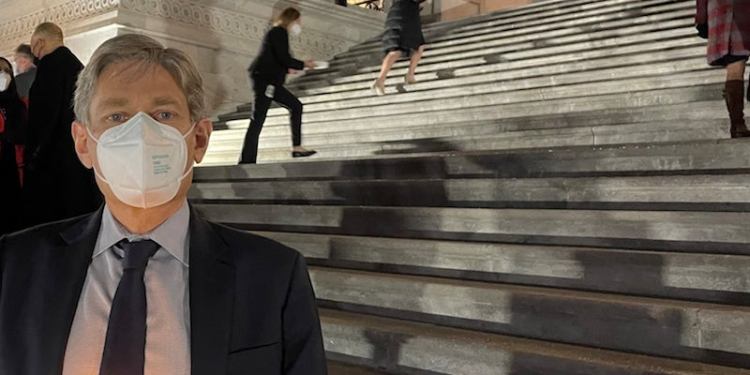 With the unofficial start of Summer just around the corner that coincides with more gas usage, Rep. Tom Malinowski is calling for old allies to do more when it comes to increasing oil production that can be exported to the U.S.

Malinowski, along with Rep. Abigail Spanberger (D-VA), introduced a resolution to urge the United Arab Emirates (UAE) and the Kingdom of Saudi Arabia to work with the Biden Administration to increase oil production and help stabilize energy markets.

The statement comes as gas prices have hit record highs across the U.S. The national average is $4.60 according to AAA on May 23. New Jersey ranks 12th with an average price of $4.77. The highest average is in California at $6.07; the lowest is Oklahoma at $4.04.

“One reason New Jerseyans are paying more than $4 a gallon for gas is that Saudi Arabia and the UAE are deliberately helping Russia, and undercutting our sanctions, by refusing to increase oil production to meet global demand,” said Malinowski. “It is time we start acting like the superpower in these relationships and exert the influence that our investment in the security of these oil producing states warrants.”

The resolution honors the historical relationship between the United States and the Persian Gulf states and outlines America’s extensive efforts to safeguard their security. At the same time it notes the two Arab countries’ recent refusal to help the United States replace the Russian oil no longer reaching international markets.

“In addition to pursuing increased energy production here in the United States, our global partners need to step up and recognize how Putin’s war is destabilizing global energy markets. I’m proud to join my colleague Congressman Malinowski in urging the UAE and Saudi Arabia to expand petroleum production in the near term,” said Spanberger. “This resolution recognizes that both nations have the obvious ability to expand their production — and we encourage them to do so.”

Worldwide sanctions imposed after Russia’s invasion on Ukraine have helped reduce Russian oil exports by up to 3 million barrels per day, contributing to the sharp rise in gas prices in the United States and around the world. Releases from strategic petroleum reserves have replaced at most half of this lost supply.

The lawmakers notes that Saudi Arabia and the United Arab Emirates are the only countries capable of rapidly increasing production to make up the difference. Instead of meeting global demand, they have chosen to honor a previous agreement with Russia to limit production, thus helping Russian President Vladimir Putin, and keeping energy prices artificially high.

“As gas prices rise in America and around the world, our country must leverage our existing relationships to decrease costs for the American people, push back against Russian aggression, and build a future marked by lasting peace, prosperity, and opportunity,” stated Spanberger.

In a letter sent to Secretary of State Antony Blinken May 18, the two House members  highlight how trips made by KBS, Saudi Arabia’s defense minister and close advisor to Saudi’s leader Mohammed bin Salman, undermine the country’s Khashoggi Visa Ban, which implements visa restrictions on Saudis involved in the murder of Washington Post journalist, Jamal Khashoggi.

“According to public reports, Prince Khalid met with a range of senior U.S. government officials, seemingly undermining the Administration’s February 2021 statements indicating that you would seek to recalibrate the U.S.-Saudi relationship by engaging your official counterparts,” wrote the lawmakers.

“We seek to understand the rationale for Prince Khalid’s multiple visits and whether the Department of State reviewed allegations regarding his alleged role in targeting Saudi dissidents, consistent with the…Khashoggi Visa Ban.”