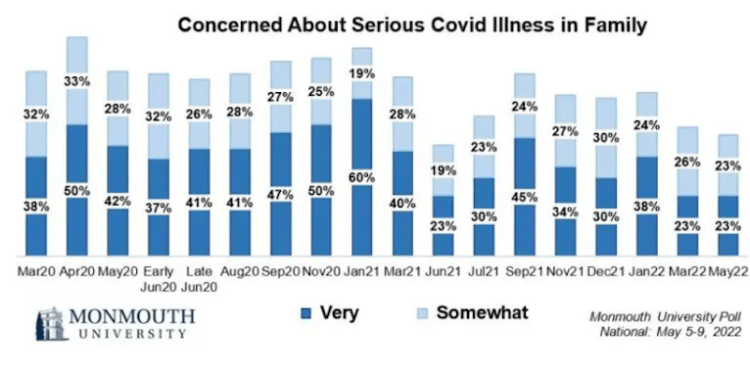 With vaccines and therapeutics increasingly easier to obtain, Americans continue to show little desire to return to health protocols aimed at containing the spread of COVID-19.

A recent Monmouth University national poll found that concern about family members becoming ill from the coronavirus remains relatively low and is approaching the nadir it hit briefly last Summer. As a result, only one-third of the public supports a return to face masks and social distancing guidelines and about 4 in 10 back workplace vaccine mandates.

The poll conducted in the beginning of May found 32% of the public supports instituting or reinstituting face masks and social distancing guidelines in their state at the current time, down significantly from the 52% in January.

At the same time, support for requiring people to show proof of vaccination in order to work in an office setting remains virtually unchanged—42% now, compared with 44% in March and 43% in January.

Notably in the crosstabs of the poll, Democrats overwhelmingly continue to back mandates for vaccines—at 78%—and mask—at 59%. Those respondents are much higher than a third of Independents and 20% of Republicans who would back the plan.

Another number that has remained consistent in recent months but down from earlier this year is the number of people who are very concerned about a family member becoming seriously ill.

Twenty three percent currently expressed concern, unchanged from March. But that percentage is down from 15 percentage points in January and a pandemic high of 60% in January 2020 when the COVID-19 vaccine destruction was in its earliest stages.

The current number of Americans (46%) who are either very or somewhat concerned about a family member falling ill with COVID is approaching the 42% floor recorded last June.

In the current poll, 35% of American adults report having tested positive for COVID. This finding is up from January (27%), but similar to March (38%). Another 13% say they were diagnosed without a test or believe they had the disease at some point during the pandemic.

No Booster for Additional Shot

The story when it comes to getting the vaccine, particularly getting a booster shot, remains unchanged. Currently, 49% of adults report having received a COVID booster dose while 34%—including a majority of Republicans—say they are not at all likely to get it.

“Public health experts say that COVID is not in the endemic phase yet, but most Americans appear to be acting as if it is. Vaccine rates have hit a wall but few want to go back to a world of mask mandates,” said Patrick Murray, director of the independent Monmouth University Polling Institute.

Ratings for how different groups in the country have been handling the pandemic have ticked down just slightly over the past two months. President Joe Biden received a “good job” rating from 46% or respondents, down three points from March.

The poll found approval of federal health agencies were down five points to 48%, state governors declining two points to 57% and the American public dropping three to 32%.

The Jersey Shore polling outfit noted compared with January, the current results are a few points more positive for all four groups.