Governor call for his gun safety bills, GOP legislation loosening current laws to be voted on 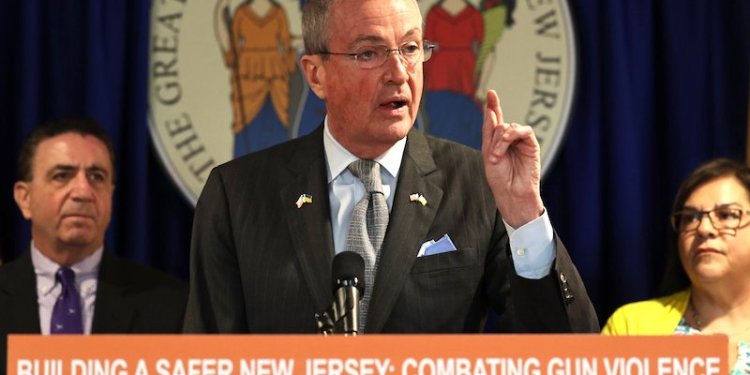 Gov. Phil Murphy called for a showdown when it comes to the direction of gun laws in New Jersey.

Murphy urged state lawmakers to put up to vote his third suite of gun safety bills against those from Republicans attempting to lessen restrictions on what are considered the nation’s toughest gun laws.

The governor during a press conference May 25 again renewed his backing for his latest round to be considered that features mandating safe storage of guns, ensure that those seeking to buy a gun have taken a safety course, give police tools to better track the paths of firearms used to commit crimes and prohibit the sale of high caliber weapons “that can bring down helicopters.”

“I call upon the Senate President and the Assembly Speaker to put these bills up for a vote, so the people of New Jersey can see where every legislator stands on these common sense measures,” he said. “But let’s not stop there. I ask the Legislature to immediately put up every bill seeking to unravel our gun laws, too. Let’s make every legislator show whose side they have chosen to be on—the people of New Jersey’s or the gun lobby’s.”

Murphy, uncharastically, called out legislators by name and the bill they support, stating “In the face of mass shooting after mass shooting throughout our nation, in the face of children being slaughtered to the point where the reports indicate these beautiful children were unrecognizable, I say let these folks come out from behind their press releases and their tweets and cast votes before the residents of this great state.”

Let the people of New Jersey see who votes “yes” to repealing our red-flag law and letting those known to have made violent threats, including domestic abusers, unfettered access to as many guns as they want … as Senator Durr wants.”

Democrats in New Jersey are renewing their push after the latest mass shooting incident in the U.S., where an 18-year old high school student opened fire at an Uvalde, TX, elementary school May 24, killing at least 19 students and two adults, including a teacher, before he was killed by law enforcement.

The young man reportedly went to Robb Elementary School, dressed in body armor, where he used two assault-style rifles purchased at a local gun store within a week of his 18th birthday. The shooting in West Texas is the deadliest school shooting since 20 children and six educators were killed at Sandy Hook Elementary in Newtown, CT, 10 years ago.

A collection of statements from New Jersey politicians about Uvalde shooting

Murphy said the issue was of such importance that it caused him to depart from his usual style of attempting to build coalitions on both sides of the aisle.

“I do believe, as much as I want to sit and try to persuade, this is a moment where folks need to stand up and be counted,” he said. “Let it rise or fall with those votes. I think the citizens and residents of this state deserve to know where everyone stands.”

Cryan: What Did You Do?

State Sen. Joe Cryan (D-20) framed the issue as the right for children to see a tomorrow.

“So the question for us as legislators is ‘Did you do all you could do to prevent this in the future?’ And one of the ways to say yes is to move common sense gun packages that only provide more safety for the state of New Jersey.”

Murphy made the case Garden State lawmakers need to lead due to the inaction on the federal level.

At the press conference, the Democratic governor took issues with those who are pro-life yet do not support what he sees as common sense gun safety laws.

“There is no lack of irony that those who would stop at nothing to strip a woman of her rights and autonomy and force her to give birth are doing nothing to prevent that child from being murdered in their school.” he said. “I am outraged that our nation remains the only one in which the senseless murder of innocent children and their teachers is even tolerated.

“I am exhausted that we have another double-digit death toll and one side—one side —refuses to do anything.”