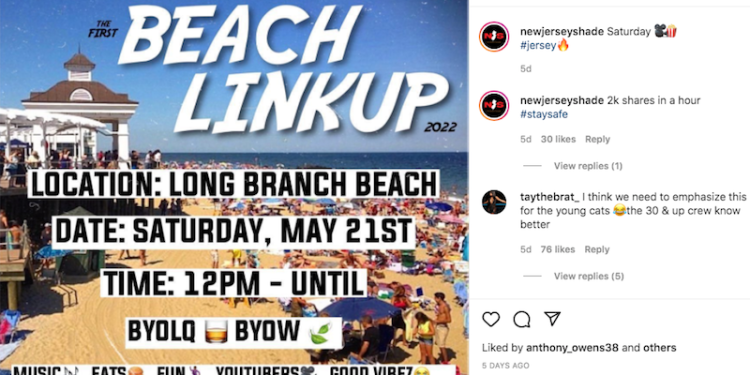 After a pop-up party driven by social media resulted in multiple arrests, the shutting of small businesses and a 9 p.m. curfew being imposed last weekend, lawmakers on both sides of the aisle are working to ensure a safe Summer down the Jersey Shore this year.

“It’s not even the Summer season yet. We’ve got to be ahead of this, and as a shore legislator, I’m asking the Governor for help now,” said State Sen. Robert Singer (R-30). “Every time we have confrontations like this, there’s a risk of people getting hurt. If we don’t take swift action, this problem will get out of hand and threaten to disrupt the vital shore economy at the worst time imaginable.”

“As we start the Summer, we want to be sure that everyone can enjoy the beachfront in a safe and orderly manner and I implore visitors to behave accordingly,” said State Sen. Vin Gopal (D-11). “Anyone who acts violently or destroys property must and will be held legally accountable.”

The confrontations Singer alluded to is the actions of a large group of teenagers who descended on Long Branch’s Pier Village May 21. According to police, crowds began arriving in the afternoon with prompting from social media posts on TikTok and Instagram that continued to grow as the day turned into night. In the end, 15 arrests were made as police used tactical gear and resorted to a flash-bang and smoke to help disperse an unruly crowd. The eleven adults and four juveniles charged were accused of engaging in fighting and one suspect was charged with stomping on a police vehicle.

The next day, Singer called on Gov. Phil Murphy and the State Attorney General’s office to immediately create a task force to prevent similar occurrences and protect coastal communities.

“This weekend’s incident followed the same script we saw last Summer, when hordes of out-of-control teenagers swarmed to the shore,” said Singer. “This is not a case of getting some people together and going to the shore, it’s an orchestrated criminal act. These are organized incidents, promoted with flyers and posts all over social media calling for people to ‘bring your booze, bring you marijuana, and let’s go to Long Branch’.”

“New Jersey Transit has to be involved. Thousands of the troublemakers are coming in on NJ Transit,” Singer said, as one report indicated that at least one train headed for Long Branch contained more than 1,000 teenagers. “We’re going to need everybody working together to get this under control.”

This is not the first time a pop-up party happened in Long Branch. In June 2021, police arrested four people for a similar gathering at the Jersey Shore town, causing local officials to postpone a planned Fourth of July fireworks show in response to TikTok videos promoting another unsanctioned “party.”

Murphy, who has not commented on Singer’s request, noted the incident hurt the businesses that had to close down because of the curfew the most.

Murphy said he felt the police response to the party “met the moment….We’ve just got to figure out a way to allow people to gather peacefully, get out and back with each other again as we all want to do, but to do it in a way and a place that affords that to happen without collateral damage.”

The governor expressed his concerns on the message that went across social media that resulted in the revelers descending to the Shore. Those promoting the event did not have or apply for a permit from Long Branch to hold the gathering.

“The concern is: When you look at the invitations that went out, it makes it look as though, in this case, Long Branch was all in on this,” he continued. “That was an official, ‘Hey, come on down. They’re letting us have the run of the place.’ And that wasn’t the case.”

Gopal posted on Facebook that ”some of these videos I saw were absolutely disgraceful and the amount of garbage left on the streets in the aftermath was disgusting.”

The Ocean County Democrat plans to offer legislation that includes increasing penalties for violent actors during the course of an non-permitted mass gatherings; increasing penalties of anyone who threatens violence or destruction of property in a social media platform; making the organizer is held responsible for the cost of destruction of public property; funding to local Police Department for mobile surveillance towers; and provide support to local law enforcement to monitor and address these “pop up parties.

“We need to strengthen our laws and make sure people are held accountable,” Gopal told New Jersey 101.5. “You can’t be unruly. You can’t throw garbage on the ground. You can’t destroy property. You can’t get into fights…You can’t have open containers of alcohol. You can’t have marijuana on the beach. These are all against the law. People need to follow the law.”