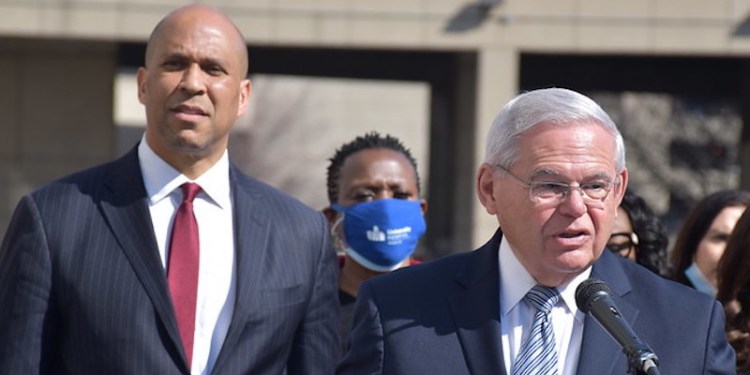 In between Buffalo and Uvalde, New Jersey federal and state lawmakers began the push to reduce mass shooting in the U.S.

Sen. Bob Menendez, Sen. Cory Booker, and Acting Attorney General Matthew Platkin were all seeking to advanced programs and legislation in an attempt to curb gun violence in America.

The racially-motivated attack in Buffalo May 15 resulted with 13 shot and left ten dead as the shooter live streamed the attack online, according to NPR. Four of the thirteen victims were store employees, and eleven were Black.

And the elementary school shooting in West Texas May 24 killed at 19 students and two teachers, before the 18 year old high school student was killed by law enforcement in the deadliest school shooting since 20 children and six educators were killed at Sandy Hook Elementary in Newtown, CT, 10 years ago. According to authorities, the young man used two assault-style rifles purchased at a local gun store within a week of his 18th birthday.

“We have a moral obligation to prevent these senseless massacres in our schools, supermarkets, places of worship and shopping malls that are tearing communities and families apart,” said  Menendez.

Booker, Menendez, and Sen. Richard Blumenthal (D-CT) reintroduced the Federal Firearm Licensing Act May 19, which would require individuals to obtain a firearm license from the Department of Justice (DOJ) before purchasing or receiving a firearm.

The Senators cited studies which found reduced gun violence in states that had enacted similar licensing laws. Connecticut saw gun homicide and gun suicide rates dropping by 28% and 33%, respectively, after passing a similar law, according to Giffords Law Center. Missouri saw rates drop by 47% and 24%.

There were already 211 mass shooting incidents across the U.S. as of May 24, according to the Gun Violence Archive which defines a mass shooting as an incident in which four or more people are shot or killed, excluding the shooter.

Booker said this type of gun violence had become “eerily routine,” and that not enough was being done to combat the issue.

“Accepting this shameful status quo will continue to lead to deadly consequences. We need to adopt proven, common-sense measures that will address the scourge of gun violence and make our communities safer,” he said.

Additionally, Quinnipiac found broad support for licensing legislation, with 77% of Americans saying they would support such measures.

“Firearm licensing laws have broad public support and have been shown to reduce gun violence in states that have enacted them, including in my home state of New Jersey. This is the moment to enact ambitious legislation—as a nation, we must rise to it, or we are fated to witness the deadly scenes of this past weekend and years past over again,” said Menendez.

Blumenthal added, “This legislation will save lives and protect communities across the United States from the devastating impact of gun violence. As shown by the success in Connecticut, simple, common sense standards like licensing laws requiring the completion of a background check and firearm safety certification work.

Platkin announced an investigation into social media platforms Discord and Twitch after the Buffalo shooter reportedly used them to plan and publicize the incident. The investigation seeks to determine whether the platforms violated state consumer protection laws by failing to moderate harmful conduct.

“These social media platforms have enormous reach, especially with young people, and have shown themselves to be staging grounds for hateful and extremist content that may radicalize children and others,” said Platkin.

The investigation will focus on whether the platforms allow themselves to be used as hubs for extremist and violent networking and community building, and whether they serve as a bridge for children to come into contact with these ideologies.