Plan comes with budget deal due by June 30 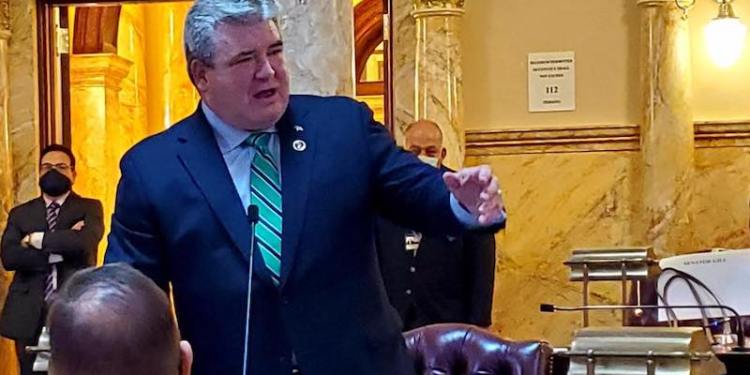 With a state budget due at the end of June, Republicans on the State Senate Budget Committee offered their own plan for the 2023 Fiscal Year budget.

The GOP lawmakers are proposing $8 billion of new tax relief, increasing the state surplus to $5 billion, more than doubling proposed debt repayments, and increasing legislative oversight of Murphy Administration spending. The plan comes days after their colleagues in the Assembly offered theirs.

“We have this unprecedented situation where families are struggling to pay their bills amid the highest inflation in a generation while the state is simultaneously bringing in record tax collections that are billions beyond expectations,” said State Senate Minority Leader Steve Oroho (R-24) in a press statement May 26 announcing his party’s plan. “We’ve proposed a comprehensive and responsible plan that includes structural reforms to provide New Jerseyans with substantial tax and toll relief at a time when it’s desperately needed.”

“Senate Republicans have offered a detailed budget plan to make responsible use of an unprecedented $11 billion windfall of state and federal taxpayer funds to support struggling families, solve long-term problems, and ensure that New Jersey is well prepared for the next recession,” said State Sen. Declan O’Scanlon (R-13), the leading Republican on the budget committee. “We’re leading the way in showing Governor Murphy and the Democrat legislative majorities how to give back billions to taxpayers while building a responsible surplus and paying down substantial additional debt.”

The GOP proposal prepares New Jersey for the next recession as well according to supporters, by growing the budget surplus to more than $5 billion, focusing one-time revenues on funding nonrecurring needs such as capital infrastructure investments the New Jersey Motor Vehicle Commission and unemployment computer system upgrades, repatriating income taxes unfairly collected by New York, and establishing restraints in recurring spending in amounts that outstrip proposed increases to address unfunded priorities.

“We recognize that much of the windfall at our disposal is likely nonrecurring, which would make it irresponsible for anyone to propose substantial permanent spending increases that we won’t be able to support when the next recession comes, which may be sooner rather than later,” said State Sen. Sam Thompson (R-12). “We’ve proposed real reforms that would strengthen the state budget, lower costs, and provide additional relief to taxpayers in both good times and bad.”

A key component to the GOP plan is oversight on the $3 billion of the American Rescue Plan. Under the current fiscal year budget, the Joint Budget Oversight Committee approves proposed allocations after what Republicans categorized as “Democrat leaders (making) backroom deals to divvy up the funds.”

They are seeking to end the blank-check provisions in the budget that allow the governor to appropriate funds to settle litigation without legislative approval. The Senators cited the $53 million paid to settle lawsuits related to COVID-19 deaths at state-run veterans homes and $21 million for abuses at the Edna Mahan women’s prison.

Additionally, Senate Republicans are seeking to block Murphy Administration initiatives that include expanding the free-and-reduced-price school meals program; subsidizing health insurance bought on the state exchange; and providing free insurance to the children of illegal immigrants.

Finally, State Senators want to close loopholes allowing for new capital spending that is not authorized under both the constitution and existing statutory debt authorizations. Their proposal would have all funds for debt retirement and avoidance be appropriated by the full Legislature, claiming funds can currently be allocated by with little transparency for pork spending rather than actual debt reduction.

Give it Back Campaign

“Our plan benefits mostly low-wage and middle-class families, because they are the ones most affected by inflation,“ said Assemblyman Hal Wirths (R-24) at the time. “But everyone will see some kind of relief whether it is through lower property taxes or rebates.

Oroho summed up that the upper chambers plan as a logical component to their Give it Back campaign.

“Our ‘Give It Back’ rebates would help address this imbalance by returning $1,500 in direct tax relief to most New Jersey families immediately,” said Oroho. “We’ve proposed substantial increases in property tax relief, tax cuts for families, seniors, and veterans, stopping pending toll hikes on drivers, and ending an unnecessary tax surcharge on businesses early.”