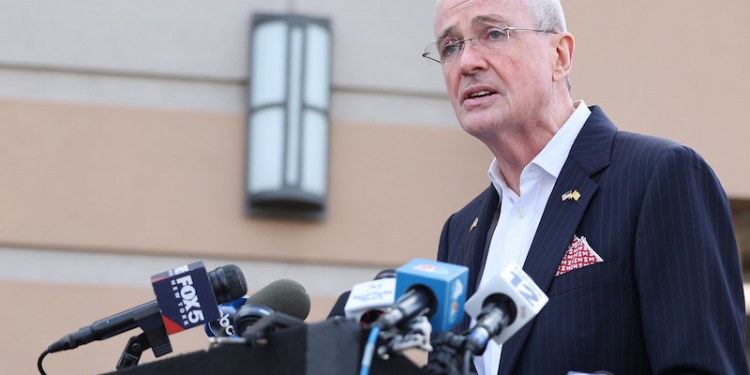 While other tri-state governors have enacted gas tax holidays, Gov. Phil Murphy is holding firm that this is the wrong road for the Garden State to take.

“You never say never given how awful inflation is now, but action at the federal level is a lot more sensible,” Murphy said during an interview on Good Day New York June 1. “They can print money that we can’t.”

The issue was raised as New York state will suspend its gas tax starting June 1 for the rest of the year that is expected to save drivers about 16 cents per gallon. The legislation also allows individual New York counties to reduce their local gas taxes. The move by the Empire State follows Connecticut Gov. Ned Lamont’s decision to sign a bill suspending the state’s 25 cents-per-gallon gas tax from April 1 to June 30.

At the North Jersey border, Rockland County has capped the local sales tax at $2. This means that only the first two dollars of gas going into a vehicle’s tank will be taxed at the county level.

The current price of gas according to AAA in New Jersey is $4.77—below the $4.93 in New York but higher that the $4.70 in Connecticut and $4.67 nationally—and expected to hit $5.00 at some point this Summer in the Garden State.

But Murphy argued the loss of revenue for a gas holiday in the Garden State would delay and drive up the costs of infrastructure projects.

“The challenge in New Jersey is that it is constitutionally tied to infrastructure,” he said. “So if we pull the gas tax, we stop the infrastructure investment and then when you restart it, it costs more money.”

Murphy’s response contrasted with New York Gov. Kathy Hochul’s response earlier in the show that her state will have the money to keep up with infrastructure projects for roads and bridges.

“We have rainy day money but the amount of money it would cost us is more to restart these programs, costs that would come right out of taxpayers pockets,” he said.

The second term governor promoted his proposed state budget that prioritizes affordability for residents in other ways, including property tax relief programs and increased funding to schools, in helping residents forced to pay a high price at the gas pump.

With a budget due at the end of the month, Murphy stated that he is “highly confident we will get to historic” savings for New Jersey residents.

“We have better, smarter, frankly bigger, more historic plans in place on affordability,” he said. “It will include historic—and I do not say that word light—steps on affordability to put money back into the pockets of our middle class families and seniors.”

Murphy offered that while relief will not come to taxpayers directly at the pump, the budget he proposed will offset the inflation pricing New Jerseyans are feeling.

“When I say historic affordability, I am talking $10,000 to $12,000 on average into people’s pocket,” he said. “I am talking about free state parks, free marriage licenses, free reups on your drivers licenses, free professional licenses for healthcare workers.”

“We are looking at a whole range of steps. But I am going to repeat my begging of the federal government to waive their gas tax because they can do it much more easily, they can print money we can’t. If you combined that all together, that is a huge amount of affordability relief for our families.”

Murphy covered a number of topics during the 15 minutes interview, including gun control, the recently enacted plastic bag ban and if he would reinstate a bear hunt in New Jersey.

On the last issue, Murphy said he had just talked to his commissioner of environmental protection about the increased sightings of bears in New Jersey communities but that his stance of looking for more non-lethal ways to handle bears was not changing.

“We take it very seriously…we have a whole lot of money in our budget for research, for manpower, for non-lethal (means) to manage this challenge,” he said. “It’s not to say there isn’t an issue here, because there is. But we believe there are better, more humane ways to deal with this than a bear hunt.”