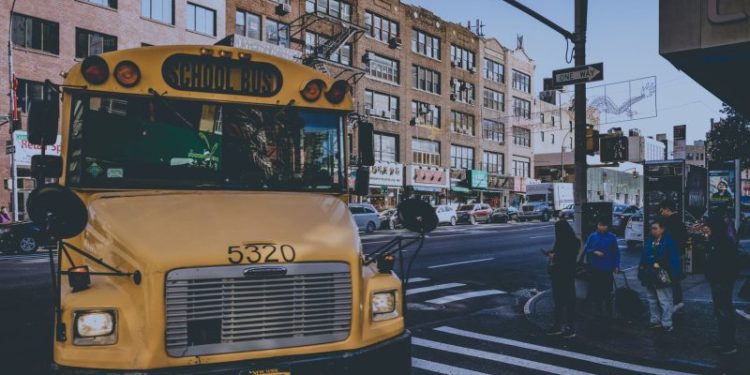 Photo by Matthis on Pexels.com

A bill designed to implement a three-year program studying the use of electric school buses was passed by the Assembly, but not before it devolved into conversations focused on mansplaining, learning loss, and even the Jetsons.

The Electric School Bus Program, to be implemented through the New Jersey Department of Environmental Protection (NJDEP), would further efforts to develop a cleaner, healthier, and more efficient school transportation system, according to Democrats in Trenton who voted to pass the pilot program.

“The diesel exhaust from buses has a negative impact on our overall health and is a major contributor to climate change. Under the Electric School Bus Program, New Jersey would spearhead a healthier, more efficient transportation system for students,” said sponsors Assemblyman Sterley Stanley (D-18) along with  Assemblywomen Shama Haider (D-37), and Britnee N. Timberlake (D-34) in a joint press statement after passage of the bill. “This measure gives our state the ability to explore different approaches for electrifying our bus fleets and would give us a better understanding of how to formulate the most effective processes in the future.”

But passage of the bill happened after a 20 minute debate on started by Assemblywoman Vicky Flynn (R-13), who opened the discussion by arguing that the funding should go towards learning loss and mental health issues resulting from the coronavirus pandemic.

“Two million dollars is woefully insufficient to address learning loss. We have to shift the priorities,” said Flynn said before being interrupted by Assemblyman Speaker Pro Tempore Benjie Wimberly (D-35), who asked to keep her comments on the bill.

Flynn them proceed to introduced a hostile amendment to reallocate the $45 million earmarked for the electric school buses to address the two issues after three school years of disrupted learning.

As she spoke, Assemblyman Herb Conaway (D-7) fired back saying record funding of more than $2 million was being allocated for both school districts and mental health. GOP leaders alleged the interruption of Flynn by both Conway and Wimberly amounted to mansplaining.

Timberlake rose to defend the bill, saying it is designed to protect the environment, and in turn protect school children across the state and address some of the issues stemming from environmental racism.

“It’s a pilot program. It’s a step in the direction to make sure that we are reducing our carbon emissions by electrifying in the state of New Jersey, and we’ve got to do that if we are going to save humanity,” she said.

Assemblyman Robert Auth (R-39) responded after Timberlake, saying that he would be all for the bill provided the associated technology was advanced enough. He argued it was not yet, citing statistics from California.

“California has experimented with this, and 11 out of the 32 buses that they experimented with are down, either because they are not running properly or they can’t get the parts for the buses. Additionally, one of the buses actually caught fire with children on it,” he said.

Assemblyman Jay Webber (R-26) added that Timberlake’s assertion that the program would save the Earth was patently false, and urged the money should be allocated to students’ today.

Assemblywoman Aura Dunn (R-25) took issue with the terminology of a “pilot program,” saying other programs were currently being undertaken by other agencies. Stanley said that although there were other programs, they were smaller in nature.

“This one would be extensively looking at the future, what we’re doing for our children…I don’t understand why the issue is coming up now, because the same bill was passed in the last Legislature without any issue,” he said.

The final word was had by Assemblyman Hal Wirths (R-24), who rhetorically asked whether the people supporting the bill were driving electric vehicles themselves, telling them to put their money where their mouths were if they expected New Jersey residents to pay for “some Jetsons bus.”