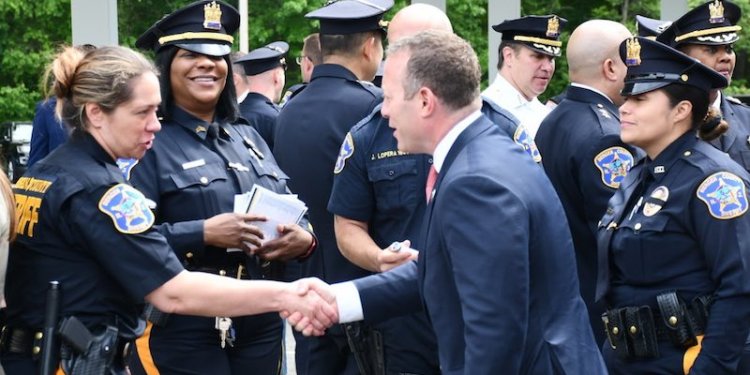 The bill, which hosts bipartisan support with 67 sponsors in the House of Representatives and 10 in the Senate, would make targeted investments in local police departments. Specifically, it would seek to ensure police officers in smaller communities had the necessary resources and training to keep their communities safe.

“Every day, our brave law enforcement wake up, put on a bulletproof vest, kiss their spouses and children goodbye, and put their lives on the line to look out for us. That’s why we must always get the backs of our first responders, and all those who serve our nation,” said Gottheimer.

Introduced by Gottheimer and Rep. John Rutherford (R-FL) in January, the bill enjoys wide support from police organizations including the Fraternal Order of Police, the National Troopers Coalition, and the New Jersey State Troopers Fraternal Association, among others.

“With my bipartisan legislation, we will make critical investments in our law enforcement, in training and tools, in recruiting and retaining the best talent, and in ensuring they have the resources they need to keep themselves and our communities safe. When it comes to law enforcement, we need to invest to protect,” Gottheimer noted.

Legislation Would Promote Training for Officers

The bill had four major points of concern, starting with investments in safety, de-escalation, and domestic response training for law enforcement officers.

The legislation as proposed would allow officers to receive job training that would make them more effective at their jobs, but would not put a strain on existing department budgets or reduce the number of officers on duty by allowing investment to be used to offset overtime pay.

Bolstering the Ranks of Departments

Gottheimer noted that 95% of the nation’s local police departments had 200 officers or fewer, and the bill would provide grants to recruit new officers

The North Jersey lawmaker argued this would help to expand departments and recruit new officers. Additionally, the funding could be used to provide retention bonuses to keep existing officers in their departments.

“We need to fund — not defund — local law enforcement. Cutting to the bone only weakens any profession; it pushes good people out, it diminishes the overall quality, and fuels a race to the bottom,” he said.

The bill would also provided funding for departments to adopt body-worn cameras for their officers in a bid to improve community relationships and to hold officers accountable.

Funding could also be used for data storage and data security, two major issues that emerged when other police departments adopted the technology in the past.