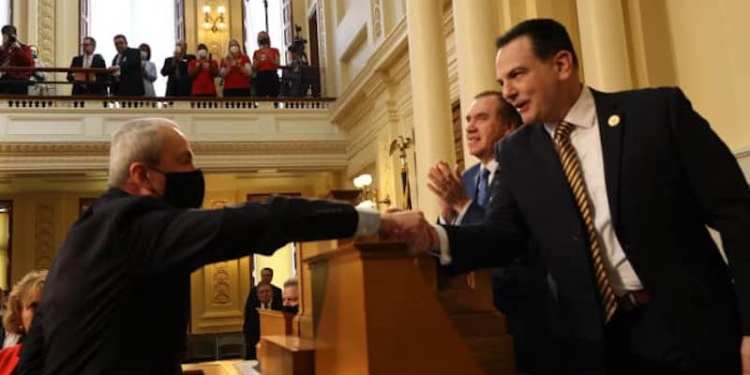 When it comes to the budget, Republicans have laid down their cards and now want to see the hand Democrats in the State Senate and Assembly intend to play.

The desire to see what Dems have planned in the budget is to ensure budget items are not slipped in at the last minute that can not be fully vetted, according to GOP lawmakers.

“We’re calling on legislative Democrats to be transparent and publicly disclose the changes they’ve proposed to the state budget as Republicans have already done,” said State Sen. Declan O’Scanlon (R-13), the Senate Republican Budget Officer. “There should be open discussions in our budget committees on all of the proposed changes so the public has an opportunity to weigh in when it matters.”

The challenge comes as Gov. Phil Murphy has publicly stated that negotiations with legislators are “progressing” for a Fiscal Year 2023 budget that is mandated to be agreed to by June 30 each year.

Republicans in both houses have presented spending plans that look to offer tax relief in light of tax revenues collected exceeding estimates that state officials estimate a $7 billion surplus.

The first proposal from the GOP came from the Assembly that focuses on adjusting the income threshold of the four lowest tax brackets to account for the effects of inflation since January 2000, rebates to combat inflation, fully returning energy tax receipts to towns over two years to lower property taxes, and restoring school funding cuts passed in 2018 that cut so-called “adjustment aid” to nearly 200 districts across the state.

After Murphy offered his budget, Democrats have remained largely noncommittal on their budgeted objectives. Assembly Speaker Craig Coughlin has stated that any budget must have “significant” tax relief for New Jersey residents while State Senate Budget Chairman Paul Sarlo has stated that a robust budget surplus is needed for any economic downturn in the near future.

The issue has arisen, besides looking to note the differences between the two parties, in regards to the governing rules of the states. The Joint Rules of the Legislature require all resolutions to be submitted at least 14 days prior to the passage of the annual budget bill and made available to the public.

Republicans claim that the State Senate and Assembly budget committees have historically quickly adopted a budget that contained hundreds of millions of dollars of “pork” additions by Democrats just minutes after the final text of the budget was provided and without the release or review of all budget resolutions, including those that were incorporated into the final budget.

“Year after year, the public is shut out of the budget process by Democrats who cut backroom deals in private, and we often don’t learn what changes were proposed or accepted until long after the budget has been adopted,” added O’Scanlon. “It’s an undeniable fact that our budget process has been anything but inclusive or transparent in recent memory.”

“I challenge my Democrat colleagues and Governor Murphy to do better this year. They can start by following the rules that require their budget resolutions to be shared publicly.”