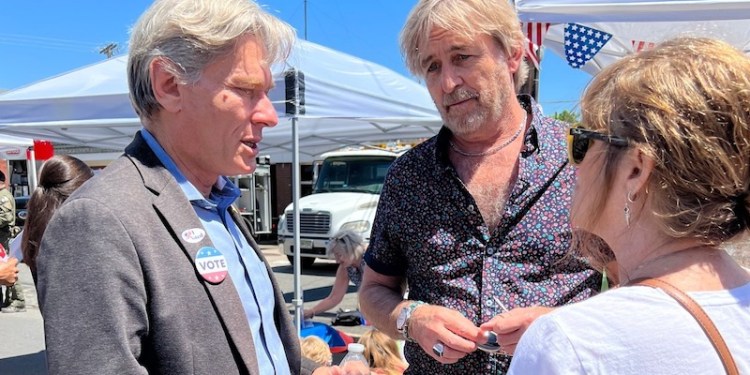 In his acceptance speech to be the nominee of the Democratic Party in the 7th Congressional District, Rep. Tom Malinowski spent a significant amount of time embracing the backing of a new party in New Jersey aimed at centrists voters.

The Moderate Party is being formed to appeal to voters who “feel that their party of choice, whether the Republican Party or the Democratic Party, no longer shares their views,” according to one of the organizers, East Amwell Township Committeeman Richard Wolfe.

Wolfe, who was a financial backer of Tom Kean, Jr. Congressional bid in 2020, told the New Jersey Globe that the formation was due to centrist voters feeling their views and priorities were not being addressed.

“I felt compelled to help form the Moderate Party because I believe the majority of voters in this country are neither far right nor far left, but instead support positions that are at or close to the center—in other words, moderate positions,” stated Wolfe, who is a Republican. “I’ve become increasingly concerned that far right extremists within the Republican Party are hijacking the party to isolate the United States from the rest of the world, deny the results of elections, close our borders, support insurrectionists, downplay or ignore science on important health and environmental issues, and block sensible gun control.”

The extremism of the right was central to Malinowski’s acceptance speech that  dedicated a significant portion to accepting the backing of The Moderate Party. He highlighted that he was accepting the nomination from “elected Republican officials in our district who are just fed up by the extremism and chaos on their side, what has happened to their party since Donald Trump took it over and who are desperately trying to find a way to bring this country back to the center, back to moderation.”

The Congressman believes The Moderate Party is part of a growing alliance in this country, where Democrats, Independents, and moderate Republicans occupy the middle ground on such issues as law enforcement, immigration, clean energy, gun laws and the economy.

“We’re people who support law enforcement, we support the police. But you know, we support them, whether they’re protecting our homes from crime or protecting our Capitol from an insurrection. You’ve got to do both if you say that you support the police,” stated Malinowski. “We’re folks who believe that our immigration laws need to be enforced at the border, but we also understand that America is a country of immigrants and we need legal immigration right now. It’s the right thing to do.”

But Malinowski’s attempt to be on the ballot twice faces hurdles. The ability for a candidate to run on multiple party lines and combine their vote totals has been illegal in New Jersey since 1920. Called fusion voting, the practice is legal in New York and seven other states.

Way in the Way

It was a decision that was not unexpected by party founders who are expected to go to court to argue fusion voting protects voter rights, free speech and equal protection for candidates and voters.

“Like many voters in New Jersey and across the nation, I’ve grown disgusted by the political discourse in our country and have switched my registration to independent,” said Moderate Party state chair Michelle Garay, a former Republican mayor of Alexandria who previously endorsed Malinowski. “This new Moderate Party will give a voice to voters like me and act as a stabilizing influence on a political system under threat.”

While Malinowski is the only candidate to receive the party’s endorsement, party leaders have ambitions to grow. They are looking to attract voters who feel Democrats are still too progressive for their tastes along with Republicans uncomfortable with the extreme right positions the party has taken.

“(This is) an important first step toward encouraging our candidates and elected officials from both major parties to stop pandering to the extremists in their parties and instead work together to achieve results that are in the best interests of their constituents,” said Wolfe. “We’re excited…to serve as an example of the type of politics that the voters in New Jersey want, with a focus on building bridges across ideological divides to improve the lives of the residents of New Jersey.”

For his part, Malinowski said that on the campaign trail it is a similar refrain he has heard from voters of all parties who want to get a sense of community tired of being told to hate their neighbors over politics.

“They want to be able to go to baseball games, and bake sales, and parades, and have legitimate constructive arguments about policy, but not ones that break up families and ruin friendships and lead to violence in this country,” he said. “There’s a yearning out there for leaders who when they see a fire burning, reach for a bucket of water, not a canister of gasoline.”