Report comes as inflation hits its highest point since 1981 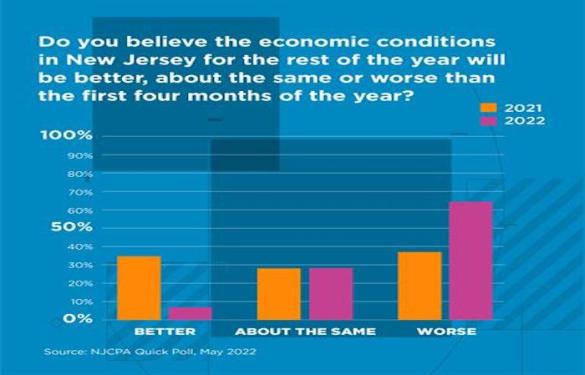 Days before the federal inflation rate hit is highest mark since 1981, New Jersey residents were told the economy will likely get worse during the second half of the year, and the overall U.S. economy is unlikely to fare much better.

That’s according to a survey from the New Jersey Society of CPAs (NJCPA), which asked questions of 441 certified public accountants (CPAs) in May. About 65% said the New Jersey economy would get worse through the end of 2022, while 68% thought the same for the overall economy.

The survey comes as the Consumer Price Index released June 10 climbed 8.6% in the year through May, a rapid pace of inflation that is making it increasingly difficult for consumers to afford everyday purchases. Prices climbed 1% from April—far more quickly than in the previous month—and by 0.6% after stripping out food and fuel prices, which can be volatile. That so-called core inflation reading matched April’s reading.

With central bankers are raising interest rates to make borrowing money more expensive in hopes to cool off consumer and business demand that gives supply a chance to catch up and sets the stage for more moderate inflation, 73% of respondents to NJCPA reported inflation was the biggest challenge businesses are facing.

Meanwhile, broader issues affecting the overall economy, including the availability of skilled personnel (57%) and supply chain problems (35%) pushed many CPAs’ economic prospects down.

“Surveys like this give a great indication of what the business community thinks of the current environment for doing business and the potential for improvement,” said Ralph Albert Thomas, CEO and executive director at the NJCPA.

The rising cost of living in New Jersey was a theme of the survey, with 69% of survey respondents saying they had advised an individual client to consider moving out of New Jersey because of it. Fifty-four percent had done the same for a business.

This was borne out in a new report from bill payment company doxo finds New Jersey is the third most expensive state in the U.S. for household bills, ranked only behind California and Hawaii. ​​Data shows residents are spending more than $2,600 a month on the 10 most common household bills. That number is 30% higher than the national average.

State and fiscal policies that were unfriendly to business (42%) and regulatory requirements (27%) were remaining reasons provided by respondents for a sour economic outlook.

When asked about the most helpful governmental steps for businesses, 74% of respondents argued inflation-fighting measures, reducing burdensome regulations (65%) and keeping the corporate tax rate low (51%).

“The government must make fighting inflation the biggest priority. If not, we will return to years of stagflation,” one respondent noted.

The answers to those questions tallied 9% and 7% in 2022, respectively.