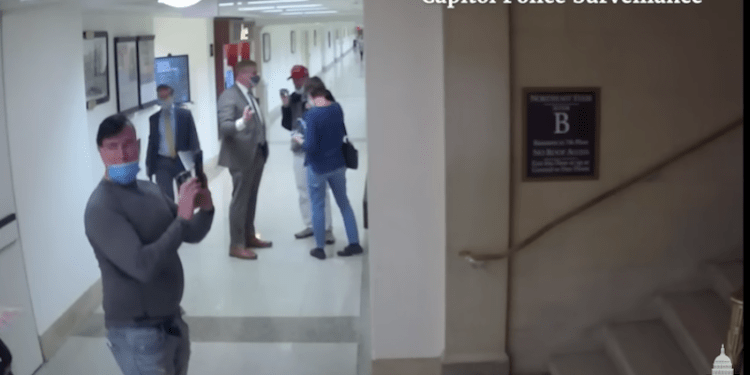 Rep. Mikie Sherrill said the video released by the Jan. 6 House Select Committee was only one of the groups she saw that conducted reconnaissance tours the day before the attempted insurrection.

When asked during an MSNBC television appearance June 15 if there were other tours, Sherrill stated “that was not the only group that I saw, I saw groups down there and we have asked the Jan. 6 Committee to understand what those people were doing in the capitol complex.”

The questions surrounding the allegations of reconnaissance stems from the Jan. 6 committee release of pictures and a video showing Rep. Barry Loudermilk giving approximately ten individuals a tour to areas in the Rayburn, Longworth, and Cannon House Office Buildings, as well as the entrances to tunnels leading to the U.S. Capitol.

“This is not what tours look like, this is not places that you take tours.”

The committee’s letter to Loudermilk came in response to the Georgia lawmaker and Rep. Rodney Davis (R-IL) pointing to comments by the head of the U.S. Capitol Police that there was nothing “suspicious” about a group of tourists in House office buildings a day before Jan. 6, 2021.

Capitol Police Chief J. Thomas Manger wrote to Davis, the top Republican on the House Administration Committee, earlier this week that Loudermilk’s constituents never appeared “in any tunnels that would have led them to the U.S. Capitol…We train our officers on being alert for people conducting surveillance or reconnaissance, and we do not consider any of the activities we observed as suspicious.”

That Jan. 6 Committee disputed that assertion, claiming as part of its investigation it has learned that some individuals Loudermilk sponsored into the complex attended the rally at the Ellipse on the morning and were part of the mob at the U.S. Capitol.

“Based on our review of surveillance video, social media activity, and witness accounts, we understand you led a tour group through parts of the Capitol complex on January 5, 2021. That group stayed for several hours, despite the complex being closed to the public on that day,” Chairman Bennie G. Thompson (D-MS)  wrote to Loudermilk. “Individuals on the tour photographed and recorded areas of the complex not typically of interest to tourists, including hallways, staircases, and security checkpoints.”

“According to video recordings from that day obtained by the Select Committee, the individual who appeared to photograph a staircase in the Longworth House Office Building filmed a companion with a flagpole appearing to have a sharpened end who spoke to the camera saying, ‘It’s for a certain person,’ while making an aggressive jabbing motion,” Thompson wrote .

The video shows the individual filming the march to the Capitol, stating, “There’s no escape Pelosi, Schumer, Nadler. We’re coming for you.”

Additionally, as the man looked up at the Capitol, he went on to say “They got it surrounded. It’s all the way up there on the hill, and it’s all the way around, and they’re coming in, coming in like white on rice for Pelosi, Nadler, even you, AOC. We’re coming to take you out and pull you out by your hairs. … When I get done with you, you’re going to need a shine on top of that bald head.”

Loudermilk, who has refused to testify in the House’s bipartisan investigation, rejected the committee’s ascertain in the letter, stating “Capitol Police already put this false accusation to bed, yet the committee is undermining the Capitol Police and doubling down on their smear campaign, releasing so-called evidence of a tour of the House Office Buildings, which I have already publicly addressed. As Capitol Police confirmed, nothing about this visit with constituents was suspicious.”

Sherrill, citing her military and prosecutorial background, has steadfastly stated the statement by Loudermilk and Davis that tours were normal are false, in part due to the COVID-19 complex restriction in place during the time in question.

“I know how important it is to investigate and collect evidence and to let that process run its course. The video evidence released by the bipartisan January 6th committee, combined with the constantly shifting narrative and misdirection from Representatives Barry Loudermilk and Rodney Davis, calls into question their dedication to our common oath as Members of Congress,” said Sherrill.

The North Jersey lawmaker added, “To see this video, to see what exactly (Loudermilk) was doing and knew what he had done, then his failure to come forward to the committee I really think is just shocking to me…I remain committed to supporting this investigation into January 6th, so we ensure it never happens again.”