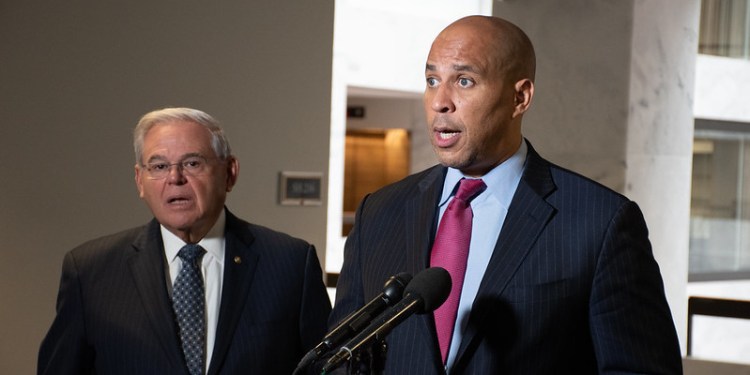 Sens. Bob Menendez and Cory Booker both hit back at Sen. Rand Paul’s opposition to the Daniel Anderl Judicial Security and Privacy Act of 2021 and contention that they have not worked at a compromise, with Menendez highlighting other justices who could have been protected by the act.

“In the month since we tried to pass this bill and now, our country has seen the tragic results of inaction…The brutal murder of Judge (Ester) Salas’ son, the horrific killing of a retired county judge in Wisconsin, and the attempt on Justice (Brett) Kavanaugh’s life demand that Congress act to protect those who sit in the judiciary,” said Sen. Menendez.

The legislation, named after the slain son of Judge Esther Salas in July 2020, would seek to protect the personal information of federal judges from being distributed to the public. Daniel Anderl was killed by a man who found Judge Salas’ info online.

Seeking a unanimous approval, Menendez found an objection from Paul (R-KY), who continued his efforts to expand the legislation to include members of Congress.

Paul stated that the bill could be passed immediately if a compromise on including Congress members could be reached, saying that “unanimous” votes needed compromise.

“I haven’t heard a cogent, or even any, argument for why it couldn’t. It’s a very simple compromise,” he said.

Paul argued that recent history showed that these protections were needed for Members of Congress, arguing that families and constituents would be better protected under the law. The GOP lawmaker offered up his amendment for unanimous approval, and Booker offered his objection immediately.

Booker objected to the amendment proposed by Paul, arguing that although the merits of his decision were “worthy” and that threats were increasing for lawmakers across the nation, it was a bill that was built through the committee process.

Highlighting the bipartisan process of building the law, he said the objections Paul brought up were discussed in committee, and every Senator in the committee thought it was worth pushing the legislation in its current form.

“Threats of the federal judiciary have increased 500%,” he said, highlighting the threat made of Supreme Kavanaugh and how the Senate immediately responded to this threat. “We did not stop the bill for the Supreme Court judges—he had no objection to that—but for some reason for other members of the judiciary. I just find that problematic.”

This is not the first time that Paul has blocked the measure and both New Jersey senators were notably angered during debate by the actions and statements made by Paul.

Menendez noted that when Judge Salas had attempted to discuss the bill with the junior Senator from Kentucky, she was rebuffed and was told he would only meet with the judge if he scheduled a meeting.

“As a matter of fact, Judge Salas is here and tried to see you…to make her case and you would not give her the time of day,” said Menendez.

Additionally, Booker referenced that a bipartisan bill being worked on by Sens. Ted Cruz (R-TX) and Amy Klochubar (D-MN) to protect Congress members, which would render Paul’s objection moot.

Booker forcefully denied the asceration by Paul that his staff for a year and a half has attempted to schedule a meeting with the staff of both New Jersey senators on the issue of providing more protection for members of Congress that have not been taking up the offer.

“I literally turned around to my staff and they said that is not the case,” Booker said during debate on the Senate floor about attempts to schedule a meeting. “We are not the opposition, we are trying to protect federal judges as is the vote of the uniamouous committee.”

The speed in which Supreme Court justices were given greater protection versus attempts to pass the Daniel Anderl Act has been an issue for New Jersey Congressional Democrats.

“We fully support expanding security for Supreme Court Justices and their families. We also firmly believe that those expanded protections should apply to federal judges and their families, who face similar threats, with less protective resources,” said the representatives in a joint statement.