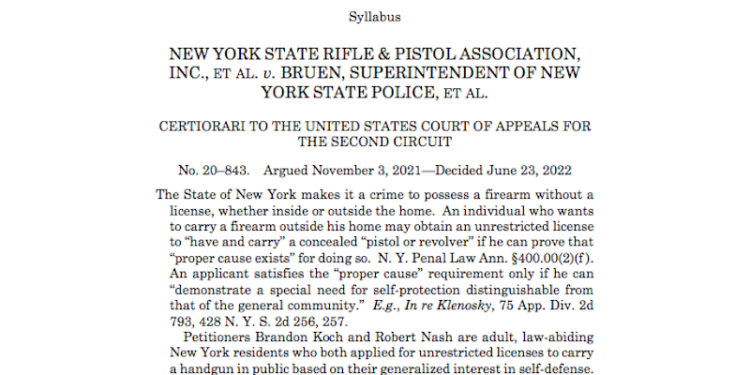 Lawmakers in Trenton and Washington said the U.S. Supreme Court ruling striking down New York state’s concealed carry gun law showed that their legislation is even more timely then before the day began.

This belief is held by both Democrats and Republicans who took the ruling as an indication to work harder to restrict or loosen gun laws depending on what side of the aisle they seat.

That is not the way that State Senate Minority Leader Steve Oroho (R-24) viewed it, declaring “I believe today will go down as a victory for freedom and that many generations of Americans to come will look upon today as a beacon in defense of liberty.”

In a 6-3 ruling, U.S. Supreme Court Justice Clarence Thomas writing for the majority ruled for “an individual’s right to carry a handgun for self-defense outside the home.”

The lawsuit, New York State Rifle & Pistol Association Inc. v. Bruen, centered around two men who were denied the licenses they sought in New York, saying that “the state makes it virtually impossible for the ordinary law-abiding citizen to obtain a license.” The men were authorized to carry guns for target practice and hunting away from populated areas, and one was allowed to carry a gun to and from work.

The decision by the court comes in the wake of mass shootings in Buffalo and Uvedale, resulting in a bipartisan gun violence deal being struck in the U.S. Senate and Gov. Phil Murphy renewing a push for his third suite of bills centered on guns that were being debated in committees in the State Senate and Assembly when the Supreme Court decision was announced.

Booker characterized the ruling as just the latest example of the “Supreme Court’s activist conservative majority imposing its ideology on the American people, further contributing to the Court’s crisis of legitimacy.”

“Following the disastrous and wrongly decided Heller decision by throwing out a century-old law that has stood the test of time…this decision also directly threatens New Jersey’s gun permitting law that helps protect the people of my state and the United States from gun violence and burdens future state efforts to do the same,” said Booker.

New Jersey’s acting Attorney General Matt Platkin released a statement that as the U.S. is “experiencing a nationwide epidemic of gun violence and all-too frequent reports of deadly mass shootings,” the courts’ decision makes it harder to combat the proliferation of deadly weapons.

Gov. Phil Murphy said administration officials were carefully reviewing the court’s ruling  and pledged to ensure that the state’s gun safety laws are as strong as possible while “remaining consistent with this tragic ruling.”

“Based on a deeply flawed constitutional methodology, a right-wing majority on the United States Supreme Court has just said that states can no longer decide for ourselves how best to limit the proliferation of firearms in the public sphere. Let there be no mistake—this dangerous decision will make America a less safe country,” said Murphy.

But state Republicans viewed the ruling as an opportunity for New Jersey to revisit what are widely considered some of the stricts laws in the nation.

“We need to seriously look at reforming our firearm laws in accordance with the Court’s decisions,” said Assemblyman Hal Wirths (R-24). “We are going to be ever vigilant because we do not trust the Governor nor his administration to start doing the right thing.”

That was followed by State Sen. Edward Durr’s (R-3) call for the passage of his concealed carry bill in New Jersey in a manner that passes constitutional muster.

Durr’s bill would require an applicant for a permit to carry a handgun to complete 18 hours of comprehensive training in the use, handling, and maintenance of handguns. The training would replace the justifiable need requirement established by current law that is unquestionably unconstitutional following today’s ruling, said the South Jersey lawmaker.

“If legislative Democrats refuse to act proactively and responsibly as I have proposed to fix our unconstitutional concealed carry law, it’s clear they will be forced to by the courts,” said Durr.

Oroho added that Republicans in the State Senate and Assembly have introduced bills to increase school security and safety, ones the Democrat majority has refused to give a hearing to.

“It was their Governor who cut a half a billion dollars from a bond referendum which could have been used to harden our schools,” said the Sussex County lawmaker. “These bills need to be heard.”