Bill Would Seek to Invest in police recruitment, retention programs for New Jersey 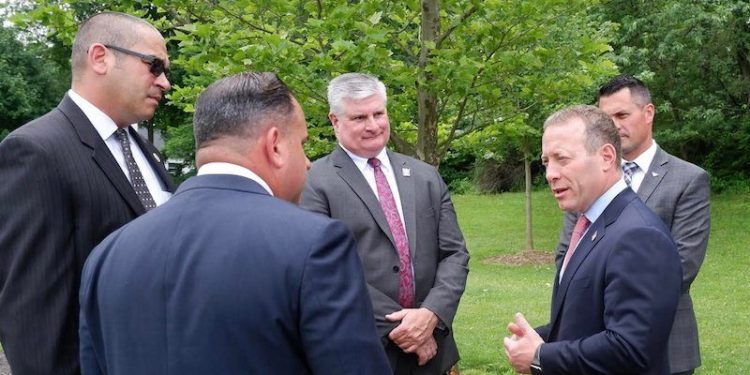 Rep. Josh Gottheimer recently helped lead the introduction of the bipartisan Pathways to Policing Act, which was designed to invest in recruitment and retention efforts for New Jersey law enforcement agencies.

“I’m helping introduce this new bipartisan legislation to make critical investments in New Jersey’s law enforcement, in recruiting and retaining the best talent, and in ensuring they have the resources they need to keep our communities safe,” said Gottheimer.

The program was designed to boost law enforcement recruitment efforts in all communities, and would focus on recruiting those with non-traditional educational or career backgrounds that could fit in the law enforcement industry.

This wasn’t Gottheimer’s first foray into funding police departments in 2022 as he introduced the bicameral Invest to Protect Act. That legislation would promote training for officers, amid other investments into the law enforcement community.

“Every day, our brave law enforcement wake up, put on a bulletproof vest, kiss their spouses and children goodbye, and put their lives on the line to look out for us. That’s why we must always get the backs of our first responders, and all those who serve our nation,” said the Congressman at the time.

The bill unanimously passed through the Senate Judiciary Committee, and boasts 85 cosponsors in the house.

In Wyckoff on June 21, Gottheimer was joined by law enforcement officers from the New Jersey State Troopers Fraternal Association (STFA) and National Troopers Coalition (NTC) to speak about the legislation. The two unions used the occasion to endorse the Congressman’s for re-election.

“I’m fully committed to always having theirs, including funding — not defunding — the training, tools, and support they need to fight crime and terror, and protect themselves and our communities.  I’m deeply honored to have the support of the National Troopers Coalition and New Jersey State Troopers,” said Gottheimer at the event.

“Since his first day in office, Congressman Josh Gottheimer has been a tireless, bipartisan advocate for law enforcement and our families, an important partner who the 1,800 men and women of the State Troopers Association can always count on to fight for us,” said Wayne Blanchard, STFA President.

“Whether it’s his bipartisan Invest to Protect Act, COPS grants, funding for bulletproof vests, or supporting the Thin Blue Line Act, Congressman Gottheimer’s leadership has been invaluable to our members, our families and the work we do to protect Jersey communities,” Blanchard concluded.