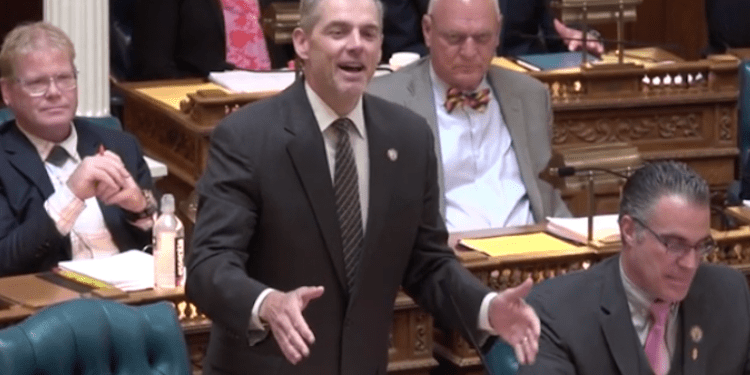 Republicans put forth two measures to put income and property tax cuts to a vote in the New Jersey State Assembly in the days before a state budget must be passed.

Assemblyman Jay Webber (R-26) put forth his legislation (A-1012), which was authored with then-Assemblyman Troy Singleton in 20212, to direct energy tax receipts back to municipalities provided the funds were used for property tax reduction. Meanwhile, Assemblywoman Nancy Munoz (R-21) introduced A-2058 for a vote which would index income tax brackets to rise with inflation.

Both of the motions did not garner the votes necessary to move forward.

“Mr. Speaker, do I have a bill for you,” opened Webber with a jovial tone. He argued that the bipartisan legislation he and Singleton co-wrote would help towns provide property tax relief to residents.

Utility companies in New Jersey pay fees for the use of public space, commonly known as public right-of-way, for energy infrastructure. The state collects those fees in the Energy Tax Receipts Property Tax Relief fund.

Webber argued changes in budget language would allow the state to divert hundred of millions of dollars each year to other projects.

“We have a $10 billion dollar surplus. I have a bipartisan bill that will cut property taxes right now,” Webber said. “It sends the energy tax receipts that the state has been collecting back to municipalities, but with a very important function. For every dime that goes back to municipalities with these energy tax receipts, the tax levy for that town has to go down by the same amount.”

Munoz positioned her bill as a way to contend with rising inflation, citing a 40-year national inflation high of 8.6% in the U.S. in May and 7.5% in New Jersey specifically.

“Incomes are increasing, but inflation is causing our dollars to buy less,” Munoz said. “Higher wages aren’t as meaningful if prices are rising higher than people’s take home pay. We are pushing people into higher tax brackets so they are actually bringing home less pay.”

The bill would allow for the indexing of tax brackets connected to inflation, a practice used by the Federal government since 1986. Additionally, new Jersey was only one of 13 states that does not employ an index bracket for taxes.

“The goal of this bill is to protect people from higher taxes, especially as their dollar doesn’t go as far as it did before,” Munoz said before motioning to relieve the bill from committee to force a floor vote.