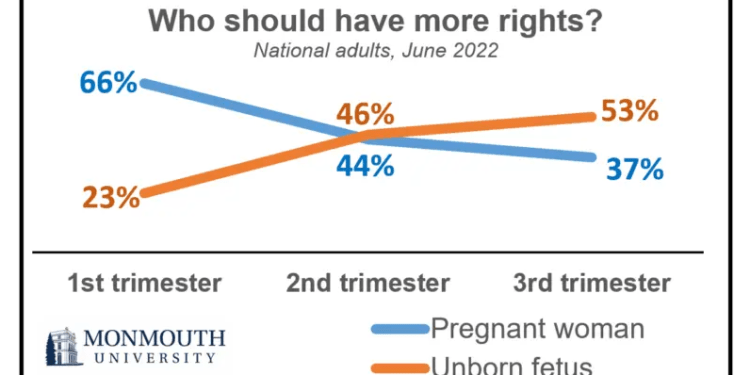 The first nationwide poll from Monmouth University on abortion shows a significant majority of Americans disagree with the U.S. Supreme Court’s recent decision but are split on what lawmakers should do.

By a 20% margin, Americans disapprove of the U.S. Supreme Court’s decision to overturn Roe v. Wade in a survey conducted just after the decision. Additionally, the poll found two-thirds of the public feels a pregnant woman should be afforded more rights than an unborn fetus during the first trimester, and with very few respondents backing bans that provide no exceptions or support state laws that prosecute residents for having out-of-state abortions.

Sixty percent of those polled disapprove of overturning the precedent that has guided abortion law in the United States for nearly 50 years, while 37% approve. When asked about viewing abortion as a question of competing rights, 66% say the pregnant woman should be afforded more rights during the first three months, while 23% say the unborn fetus should have more rights.

“The high court’s legal opinion does not coincide with what the majority of Americans see as a woman’s right, at least through the first trimester,” said Patrick Murray, director of the independent Monmouth University Polling Institute said in a statement when the poll was released June 28.

Nearly 70% of Americans support keeping the procedure legal—either always legal (36%) or with some limitations (30%). Another 22% say it should be illegal except for rape, incest or to save the mother’s life and 10% say it should always be illegal. The number who say abortion should be legal in most cases (66%) has changed very little from May (64%), when the court’s decision was first leaked to the public, and remain in line with prior Monmouth polls on this question in 2021 (62%) and 2019 (63%).

The poll finds some gender-based differences in abortion opinion. There is a 14-point gap between women (73%) and men (59%) who feel that abortion should be legal, either always or with some limits.

Additionally, there is a 22-point overall gender gap between women (27%) and men (49%) approving of the Supreme Court’s decision to overturn Roe. Through a political spectrum, the difference is seen more among Republicans where differently sized majorities of both women (61%) and men (78%) support the court’s ruling. Democrats, on the other hand, display nearly no gender gap on disapproval of the decision (96% women and 89% men).

The Jersey Shore polling outfit noted gender-based differences in opinion of whether a woman or fetus should have more rights are due primarily to the fact that more women identify as Democrats and more men as Republicans.

“When it comes to public opinion of abortion policy, the driving factor is partisanship rather than biology,” said Murray.

Forty-seven percent responded they would be bothered a lot if abortion was banned nationwide along with 46% if certain states banned abortion. Both of these results are slightly higher than Monmouth’s poll last month.

Only 11% are supportive of bans that do not include exceptions for rape, incest, and when the life of the mother is at risk. Also, 87% oppose allowing states that criminalize abortion to bring a woman to court for having an abortion in another state where it is legal. Just 10% say that the home state should be able to prosecute a woman for an out-of-state abortion.

“Legislatures in conservative states that are enacting draconian abortion bans appear to be imposing provisions that represent a fringe view even within their own states,” said Murray.

Asked about the direct impact of Roe being overturned, only 3 in 10 Americans say individual states being able to ban or restrict abortion would personally impact them or their family—3% say it would impact them a great deal and 17% say some. On the other hand, half (50%) feel they will not be impacted at all and another 18% do not expect much impact.