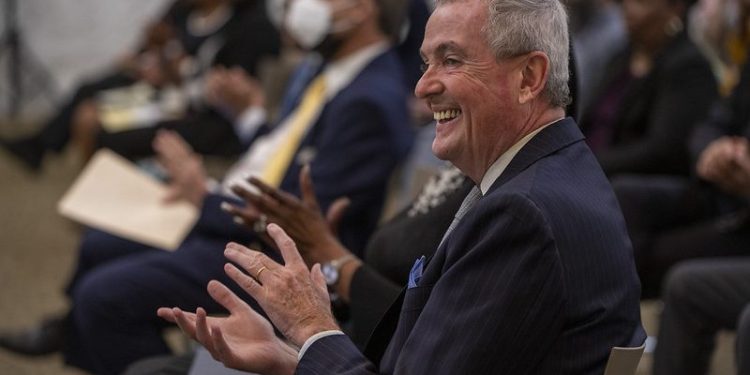 Gov. Phil Murphy signed into law a record $50.6 billion budget for New Jersey on June 30 that is being viewed in two ways by state lawmakers.

But the budget for Fiscal Year 2023 is seen as being one that uses unprecedented levels to invest in New Jersey’s future that is the “single greatest in history” according to State Senate President Nicholas Scutari (D-22) or a missed opportunity to give taxpayers an immediate break to make the Garden State more affordable to live in, as GOP legislators detailed in their opposition.

The budget deal includes the $2 billion ANCHOR property tax relief program proposed by Murphy as a replacement to the Homestead Benefit Program; a recently announced back-to-school sales-tax holiday; fee waivers for marriage licenses and state parks among others; making a full pension payment; a $6.8 billion in surplus to help the state weather a slowdown in the economy; $1.7 billion in federal American Rescue Plan aid for capital projects around the state; and $12.7 billion in direct aid for schools.

During the signing ceremony in Cranford, Murphy stated the budget is a continuation of his promise to move the state forward that he has campaigned on in being elected twice as governor.

“The properties of this budget is the priority of our families and at the top of this is affordability,” he said. “We are restoring New Jersey’s long-term fiscal health. We are returning responsibility and responsiveness to our fiscal house and we are governing on how we said we would.”

State Sen. Paul Sarlo (D-36), chairman of the Senate Budget and Appropriations Committee, proclaimed that the budget agreement is a “responsive and responsible budget” that addresses the economic challenges the state and the nation currently faces.

“This plan will make the lives of the people of New Jersey more affordable with substantial property tax relief for homeowners and renters, direct savings from the distribution of the energy tax, a tax holiday for school supplies and tax credits for children,” said Sarlo. “This is a state budget that will address immediate needs, provide significant tax relief, install economic safeguards and support future opportunities.”

Among the investment expenditures in the budget are:

Assemblywoman Eliana Pintor Marin (D-29) promoted the budget as in almost every single area, does something to fix a problem, help a group in need, or build upon past success.

“This is what a fiscally responsible budget looks like: promoting affordability, spending within our means, helping people who need it, and meeting or exceeding all of the state’s obligations,” said Pintor Marin, the chair of the Assembly budget committee.

The bill passed by a vote of 25-15 in the Senate, and by a 48-30 vote in the Assembly. In both chambers, the 2nd district’s Republican legislators were the only politicians to not vote with their party—State Sen. Vince Polistina, Assemblyman Don Guardian  and Assemblywoman Claire Swift.

Republican state lawmakers, led by State Senate Minority Leader Steven Oroho (R-24), characterized the budget as missing “a historic opportunity” to give money back billions to taxpayers who are struggling with high taxes and inflation.

“Instead of the $8 billion of tax relief that Republicans proposed, Democrats are giving back scraps while doling out billions of dollars for pork projects that we can do without,” said Oroho.

Assembly GOP Budget Officer Hal Wirths (R-24) added “There’s more pork here than the state of Iowa. Everybody got something, but the taxpayers didn’t get anything. The taxpayers got screwed on this budget.”

State Sen. Joe Pennacchio (R-26) predicted that the seeds of future State budget deficits and tax increases “are sowed with this budget.”

“As inflation rages on, New Jersey is doing its part to fan the inflationary flames,” said Pennacchio. “With all the one-shots and the enormity of the spending increases in this budget, the future pain to taxpayers will be great. It will require increased State taxes, and reductions in school and local aid which will increase local property taxes. Tax increases will be across the board.”

Murphy dismissed those concerns, noting the $6.8 billion surplus in the budget would be there for any downturn in the economy.

“But even in this budget, investing in the year ahead, it is focused on the New Jersey we leave for our kids and grandkids is more affordable in the long term,” he said. “This ensures that we meet the unexpected  financial challenges in the year to come—and I think there will be many—but it is a sign to the credit ratings agency that we are serious beyond that.”