Two new laws expand protections for those in the Garden State 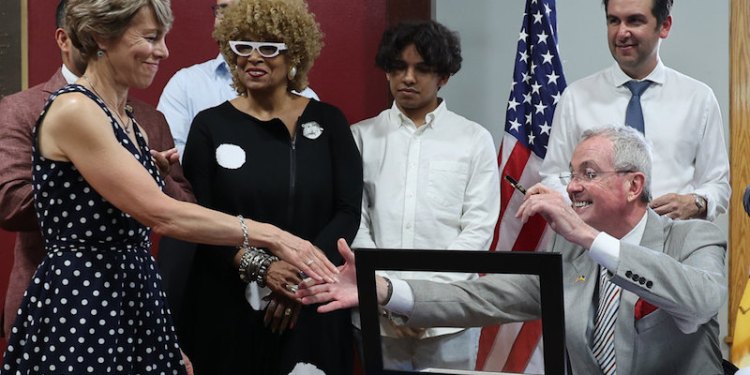 Gov. Phil Murphy summed up the feeling of North Jersey Democrats when he stated that it is “with a heavy heart and enormous pride” he signed legislation protecting those seeking an abortion and those that provide it.

In Jersey City on July 1 alongside State Senate and Assembly sponsors of the two bills, Murphy signed into law barring a state medical provider from disclosing information about a patient seeking reproductive health services unless explicit consent is given and a second prohibiting the extradition of an individual to another state for actions related to reproductive healthcare services lawfully provided in New Jersey.

The laws were introduced and passed in the days after a Supreme Court ruling overturned Roe v. Wade that allows states to ban abortions under any circumstances.

“While others throughout the country are revoking a woman’s right to reproductive freedom, New Jersey will continue to defend this fundamental right in our state,” said Murphy. “By bolstering protections against potential repercussions for both health care professionals and patients, we are sending a message to all who seek or provide reproductive health care within our borders that we welcome and support you.”

The legislation was pushed by New Jersey democrats after the U.S. Supreme Court upheld Mississippi’s attempt to ban most abortions after 15 weeks of pregnancy, overturning a decision by the New Orleans-based 5th Circuit Court of Appeals in Dobbs v. Jackson Women’s Health Organization that found the Mississippi law ran afoul of Supreme Court precedent by seeking to effectively ban abortions before viability.

The ruling allows states to enact their own laws and restrictions on a woman’s right to choose, including in cases of rape and incest. It is estimated that about half the states in the U.S. will enact trigger laws that will now ban or severely restrict most abortions procedures based on the high court’s ruling.

“Last week’s Supreme Court decision was a devastating blow to millions of individuals throughout the country, putting their right to make their own health decisions in jeopardy,” said State Senator Nia Gill (D-34). “While the right for any individual to receive an abortion remains protected under New Jersey law, states around the nation, such as Texas and Missouri, have or are considering laws that would essentially criminalize certain reproductive care.”

“Everyone should be allowed to have protection and privacy when making decisions relating to their own health, and this legislation is an imperative measure to protect the rights of all individuals receiving these services in New Jersey.”

The new law bars a public entity in the state from providing any information or expending any resources in furtherance of any interstate investigation or proceeding seeking to impose liability for the provision of reproductive health services.

“With certain states taking radical steps such as allowing civil litigation against New Jersey physicians and healthcare personnel for providing reproductive healthcare and reaching outside their borders to criminalize travel to our state by women availing themselves of fundamental rights protected under New Jersey law, we must act to protect a woman’s control over her own bodily autonomy and future,” said Assemblyman Raj Mukherji (D-33). “New Jersey will not extradite women or healthcare providers who are criminally charged under unjust, overreaching laws in another state for protected activities occurring within our state.

“New Jersey will protect the sacrosanct privacy of people’s medical records, and we will not cooperate with efforts to harass our medical providers through extraterritorial litigation for conduct occurring squarely within our borders which falls squarely within our laws,” said Mukherji.

The second focuses on the New Jersey Uniform Criminal Extradition Law that permits the governor to surrender any person charged with committing a crime back to their home state. This bill would restrict the Governor’s authority to extradite when a person is charged with receiving or providing reproductive health care services that are permitted in New Jersey, and the person was not in the state seeking the extradition when the alleged crime occurred and is not fleeing that state.

“This legislation aims to protect medical professionals who provide reproductive healthcare services in New Jersey that is in violation of any other state’s laws and prohibits the use of extradition,” said Assemblywoman Lisa Swain (D-38).

Gil added that New Jersey “has a duty to defend those engaging in their reproductive rights from punitive out-of-state restrictions on their freedoms, and I am happy to say that the right to choose is a sacred right for all in New Jersey.”

The Supreme Court ruling does not affect the ability of New Jersey residents to have access to an abortion, as the state codified Roe v Wade earlier this year. In January, the Legislature and the Governor passed and signed the New Jersey Reproductive Freedom Act as a preemptive strike to ensure women maintained their autonomy over their reproductive health.

“We acted in January of this year with a preemptive strike to ensure New Jersey women are not affected by the whims of Scotus and their overturning of Roe v. Wade,” said Swain. “Women and their doctors are the only individuals necessary to make choices about their bodies and reproductive health.”

Murphy added that “these laws represent our commitment to standing by a woman’s right to make her own decisions about her body and will serve to make our state a beacon of freedom to every woman in America…to those states whose enmity toward a woman’s right to an abortion has now turned to outright hostility, and who will attempt to use the court’s already egregious ruling to prosecute a woman for having the audacity to practice autonomy over her body, we say, ‘no way, no how, not here’.”