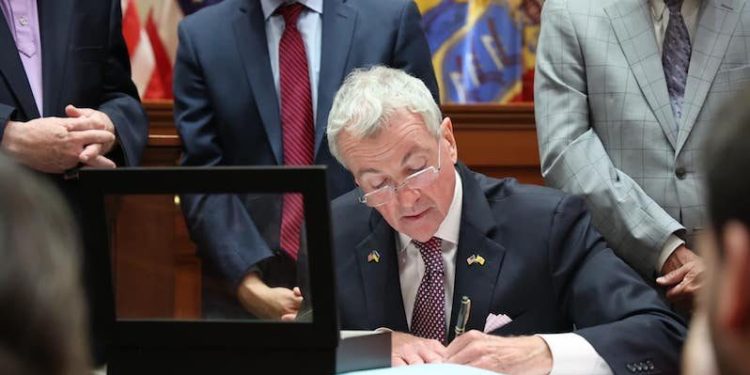 The third suite of gun safety legislation under the Murphy Administration was signed into law with promises from lawmakers and advocates to keep fighting to end gun violence.

Gov. Phil Murphy signed into law seven new bills he said will continue to make New Jersey one of the strictest when it comes to gun laws in the U.S.

“We know that we can take on the epidemic of gun violence and win,” said Murphy during a signing ceremony in Metuchen July 5. “We know that we can put in strong and smart gun safety laws that are consistent with the Second Amendment and still protect our communities.”

Speakers noted that 37 Americans were killed by gun violence on July 4, including five in New Jersey and six at a parade in Highland Park. Murphy offered that in the 15 months since unveiling the legislation, their have been a total of 870 mass shooting.

The suite of bills picked up new steam in Trenton after the death of 19 students in Uvalde, TX, and despite the U.S. Supreme Court ruling in New York State Rifle & Pistol Association Inc. v. Bruen, in which a 6-3 majority ruled that individuals have a general right to carry firearms in public. A lawsuit has been filed in federal court seeking to loosen the concealed carry legislation in New Jersey.

“There are those who think this is just the price of living in the United States…sadly it appears that six of these mistaken people sit on the SCOTUS,” said Murphy.

The Supreme Court ruling was followed by President Joe Biden on June 25 signing into law the Safer Communities Act, the most sweeping federal gun violence law in decades, saying “lives will be saved.” The bipartisan bill negotiated by U.S. Senators will toughen background checks for the youngest gun buyers in the U.S., keep firearms from more domestic violence offenders, and help states put in place red flag laws that make it easier for authorities to take weapons from people adjudged to be dangerous.

Murphy offered that after the Supreme Court’s “wrong headed ruling” he will work with State Senators and Assembly members to expand the number of places where firearms cannot be carried, including locations with a high density of people, locations with inherently vulnerable populations, and buildings where important governmental or First Amendment-protected activities take place.

Additionally, the governor signed an executive order directing all state departments and agencies to review all statutes, rules, and regulations to identify actions that may be taken to determine whether, and in what manner, firearms may be carried, displayed, or otherwise regulated. This includes the authority to designate certain locations where carrying of firearms is prohibited, as well as authority to regulate the manner of carrying, transporting, possessing, or conveying firearms.

Murphy said while there were those they did not believe a third round of laws restricting guns could pass in New Jersey, “today, we are making gun safety package 3.0 the law of the land.”

“These bills will save lives,” said New Jersey Acting Attorney General Matt Platkin. “I grew up in the Columbine generation….I thought we were going to figure (gun violence prevention) out. I didn’t think we would still be here. But here we are in a country dealing with 10 mass gun shootings a week.”

“They are common sense, they are smart and they live up to New Jersey’s values,” added Murphy.

Despite the new laws, the governor referenced a recent state poll that showed Garden State parents are worried about mass shooting events at their child’s school as well as the shooting that left six dead at the Highland Park  4th of July parade when he said “These are not going to be our last words on gun safety. We can not walk away from here today thinking our job is done because it is not.”

State Senate Majority Leader M. Teresa Ruiz (D-29) commented that in her district, living with gun violence is an everyday part of life.

“I speak as (someone who) can identify the difference between a firework and a gunshot because of where I live,” said Ruiz. “In my (Newark) neighborhood, we have always understood that gun violence has been a public health crisis facing all of us.”

Ruiz pushed for more funding for education to cut into the achievement gap in order to prevent students from turning to lives of crime because they do not know of another path to be successful.

“When we speak about trauma, it is my children that have been impacted by that, when they walk to school because they do not feel safe in their homes or their backyard and their neighborhoods,” said the Essex County lawmaker. “Firearms have overtaken from automobiles as the leading deaths of children. That is something you do not want to hear as a mother; as a public advocate, that is something I will not tolerate.”

The third set of bills was not a complete win for Murphy. Legislation that would have raised the age to buy shotguns and rifles in New Jersey to 21 from 18, new gun storage laws and a measure to limit body armor did not meet with approval from both houses.

More Work to Do

Murphy addressed that there has been a “lot of noise” of the need for more laws despite receiving the state having having the second-strongest gun laws in the U.S., after California, according to Gifford Law Center.  He offered that more needs to be done on the federal and state levels outside of New Jersey as 85% of the guns used in crimes are from out of state.