Mental health seen as bigger cause of mass shootings than guns 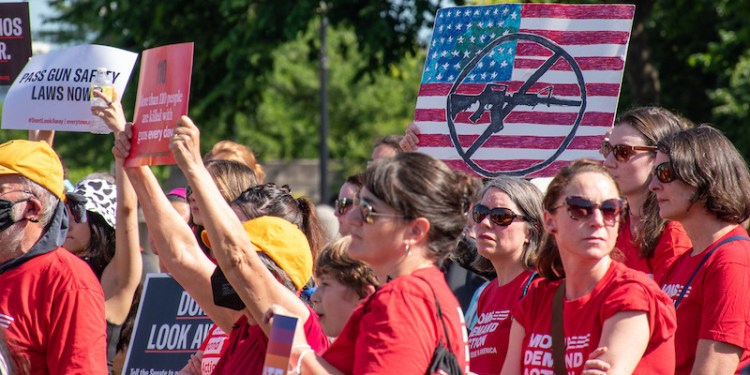 After its survey finding Americans were strongly against its abortion ruling, Monmouth found the public again giving a thumbs down to the Supreme Court’s recent decision to loosen gun rights restriction.

Notable in the survey results is that few Americans have heard a lot about the new federal gun safety law enacted, but most agree with gun advocates that the nation’s mental health crisis is a bigger contributor to mass shootings than the ease of obtaining firearms.

Fifty six percent of those polled agree that individual states should be allowed to limit who can carry a concealed handgun by requiring permit applicants to demonstrate that they need the weapon for their work or for protection. Another 42% side with the court’s recent decision and say states should not be able to do this.

“Both the Supreme Court and the American public are bitterly divided on the question of gun access,” said Patrick Murray, director of the independent Monmouth University Polling Institute. “The big difference, though, is a majority of the public comes down on the opposite side of the issue from a majority of the court.”

In six states impacted by the high court’s ruling abolishing “may issue” permit laws—New Jersey, California, Hawaii, Maryland, Massachusetts, and New York—only 26% of residents endorse the court’s position. In these six states, 42% of residents say the high court’s recent ruling against these permit laws will make the public less safe where they live, while 19% say the public will be more safe and 39% say the ruling will have no impact on public safety where they live.

As for the public’s view of gun rights and the Constitutional, 30% of Americans see the Second Amendment as offering an absolute right to bear arms. While 54% say the right is important but should have restrictions, 15% say it would be better for the country to do away with the right to bear arms entirely.

An overwhelming majority of the public (83%) supports a comprehensive background check requirement for all gun purchasers—including 76% of current gun owners. Three in four Americans (75%)—including 60% of gun owners—support a federal red flag law that would allow police to temporarily take away the guns of someone who poses a threat to themselves or others.

The federal bipartisan gun safety bill Safer Communities Act signed into law the weekend after the Supreme Court ruling of New York State Rifle & Pistol Association Inc. v. Bruen, in which a 6-3 majority ruled that individuals have a general right to carry firearms in public seems to have been lost on the American public: 44% had not heard about the bill or have no opinion of it.

For those who were aware of it being signed into law, 36% approved versus 19% dissenting. A third of the public (32%) says the gun safety measures in the new law do not go far enough, 9% say they do go far enough and 15% say they go too far.

“Other countries with similar public mental health challenges experience far less gun violence than the U.S. These results may indicate that gun advocates’ messaging about mental health being at the root of these mass shootings has been fairly effective with the American public. This new gun safety law, and its focus on mental health remedies, reinforces that message,” said Murray.

Unsurprisingly, the pollsters noted huge partisan differences on these questions. The vast majority of Republicans (80%) point to mental health issues as the problem while most Democrats (62%) responded access is the prime culprit. Moreover, 64% of Democrats expect gun violence to increase in the next five years;  Republicans feel the same at 39% with 15% actually expect it to decrease.

Among current gun owners, 49% view the Second Amendment as an absolute right while 47% offered that the right to bear arms should have some restrictions. The number of self-reported gun owners, as well as the reasons they give for having a weapon, have remained steady over the past four years. Currently, 35% of American adults say they own a gun, pistol, or rifle – including 49% of men and 21% of women.

The top reasons for owning a gun are personal safety (71% major reason) and to protect property (62%). Just under half confirmed a major reason for having a gun is to go hunting (47%) or target shooting (43%). These top reasons are largely in line with responses current and former gun owners gave in a 2018 Monmouth poll.

Purposes that are less likely to be cited as major reasons for owning a gun include to collect as a hobby (32%), to defend against possible government tyranny (28%) or as a job requirement (17%)—although each of these results is five to six points higher than in 2018.

Less than half of the American public (42%)—and 18% of gun owners—back banning and a mandatory buyback of currently owned assault weapons. The vast majority of people who back these measures strongly support them. Support levels for the gun measures are virtually unchanged from a Monmouth poll taken in 2019.