New management for a new century is needed in Washington

by North-JerseyNews.com
in Opinion
0 0
6 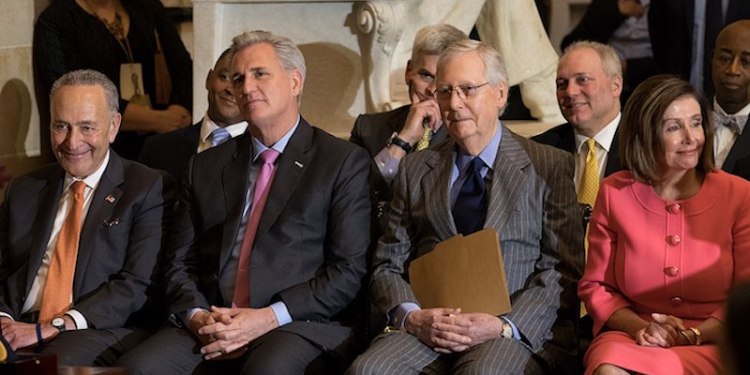 The news in the Monmouth Poll released last week is grim when it comes to voters’ trust in our Democracy.

No matter the results of the elections this coming Fall, voters are calling for a new direction. We believe that starts with each party electing new leaders in the House and Senate.

The call comes in both parts a feeling that leadership has been in place for too long as well as questions about how well they could serve their party and country going forward.

Senate Minority Leader Mitch McConnell (R-KY) and the top three members of House leadership— Speaker Nancy Pelosi (R-CA), Majority Leader Steny Hoyer (D-MD and Whip James Clyburn (D-SC)—are all significantly older than the mandatory retiring age of the New Jersey Supreme Court. Notably is that McConnell and Pelosi, adversaries for years in their leadership positions, are both over 80.

We are not discounting their ability to do their jobs. Both have been historically significant in their roles—McConnell reshaping of the Supreme Court and Pelosi shepherding through Congress Obamacare and the Bipartisan Infrastructure Bill. But both are viewed so negatively by members of the other party, it’s important for new leadership to be elected to have a true reset in Washington.

As for Rep. Kevin McCarthy (R-CA), it has become increasingly clear that he does not have the gravitas to be a leader. His acquiesce to Donald Trump in regards to the events around Jan. 6 after first stating he should be held accountable are disqualifying in our view. The same is true for the rest of the GOP leadership.

And while given a difficult hand with a split Senate, Senate Majority Leader Chuck Schumer (D-NY) has been unable to be the bipartisan dealmaker—even within his own party—to deliver for his President and party.

Both parties need to elect leaders that do not cater to the extremes of their wings, but employ politicians that represent swing districts across the U.S. Diversity is sorely needed in leadership to reflect our country. But not just religion, sexually orientation and skin color but of economic class, geography and work experience.

For example, when it comes to reforms such as immigration, the voice of immigrants is as important as an officer who patrols the southern border. We have seen the issue stall for too long now because lawmakers and interest groups keep talking past each other instead of looking for commonground to get a deal done.

Each party should look to those in their ranks and have shown an ability to strike deals with the other side. In the Senate, we are looking at Democrat Chris Murphy of Connecticut and Republican Mitt Romney of Utah who have not only shown a willingness to work across the aisle, but have produced legislation that appeared all but certain to fail and understand perfection should not get in the way of progress.

The Dems in the House should consider promoting Rep. Hakeem Jeffries, the 4th ranking member of House leadership to the top position of their party. While left of center, he has a reputation of being fair minded and enjoying good relationships with all factions of the caucus.

The GOP side is tricker as most of their caucus has shown an inability to break away from Donald Trump. Consider the cases of Reps. Liz Cheney (R-WY) and Adam Kinzinger (R-IL), now ostracized by their party for wanting to find the truth and holding those responsible for what happened Jan. 6.

We suggest that each party give serious consideration to assuring that members of the Problem Solvers Caucus be included. The co-chairs, Reps. Josh Gottheimer and Brian Fitzpatrick (R-PA), are two lawmakers that have shown leadership and willing to lead their party in directions that focus on solutions rather than promoting legislation that have no chance in passing the Senate. Without their work last year, the infrastructure bill would not have passed. Those are the type of leaders the country needs more of in Washington.

Another lawmaker to be looked at by Republicans would be first term Rep. Tony Gonzales (R-TX), from San Antonio. Gonzales would help the GOP with their growing influence in the Hispanic community and recently showed he is willing to vote against his party when he sees it is the right thing to do—he was the lone Texas house member to vote for the recent bipartisan gun safety law.

A North Jersey name we think should be considered for a leadership post as well is Mikie Sherrill. Her experience, which includes military service and serving as a prosecutor as well as her ability to turn a historical red district blue, would serve Democrats well in their attempts to reach those all important swing voters.

What is driving this call is that we are nearly a quarter into a new century but the leadership in the U.S. Senate and House are not, leading to a hardening on both sides playing to their bases and not moving the country forward. We do not need a rerun of the McConnell-Pelosi show in 2023.

The U.S. needs representatives who grew up in the internet age for the challenges we face now and in the future, whose lives have been shaped in much different ways than the current generation of leadership. We need new ideas to take on our biggest challenges and new voices to provide them, playing to the center of the country.

When January comes, McConnell, Pelosi, McCarthy and Schumer should step aside to provide a new beginning the country is desperately ready for.