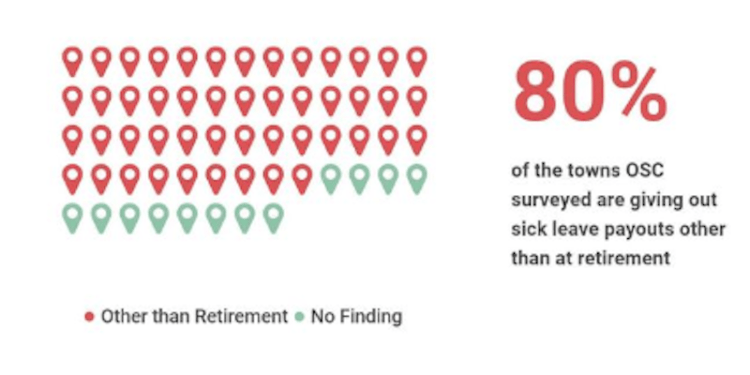 The state’s watchdog recently released a report that found a majority of New Jersey towns it surveyed have continued the policy of paying out unused sick days despite laws on the books that outlaw this practice.

The Office of the State Comptroller (OSC) report revealed that of the 60 towns it reviewed, 57 violated some part of statewide reforms approved in 2007 and 2010 that capped how much a town could pay out to its employees upon retirement.

The OSC reported that towns are allowing public employees to cash out their unused sick days for what are essentially yearly bonuses and, in some instances, towns unlawfully promise to make large payments years into the future.

“Year after year, towns spend taxpayer money to fund costly, wasteful year-end bonuses for public employees that are hidden from taxpayers,” said Acting State Comptroller Kevin D. Walsh in a press statement with the reports release. “The laws on sick leave payments are being ignored by a lot of towns, and this is putting a financial strain on taxpayers. Mayors and council members who want to lower property taxes are missing an opportunity to do so.”

The report used as an example the practices in Palisades Park. In its 2021 report on Palisades Park, OSC found that the borough’s Business Administrator was collecting annual sick leave payouts and was entitled to a $360,000 payout when he retired, $160,000 of which was for unlawful sick and vacation leave. According to investigators, enforcing the law would have resulted in a 30% reduction in his retirement payout.

After that investigation, OSC issued a survey to 60 municipalities across the state in an effort to understand how widespread the problem is.

OSC’s report found that in the towns reviewed:

The three towns that did follow the laws were Montgomery Township in Somerset County, Upper Township in Cape May County, and Holmdel in Monmouth County.

“Laws that were intended to lower property taxes are being ignored and violated in a staggeringly high number of municipalities,” Walsh told reporters during a press call. “Municipalities are annually handing out what are effectively unlawful, under-the-radar annual bonuses. Waste is happening today and towns have committed themselves to even more waste in the future.”

Walsh noted that multiple independent government agencies have reported on sick leave abuse in the past. In 2005-2006, three different reports came to the same conclusion that extravagant sick and vacation leave payouts were driving up property taxes in New Jersey and reforms were needed to end it.

In 2007, the state enacted laws that capped some senior employees to $15,000 worth of sick time and barred annual payouts for unused leave, instead allowing them only at retirement. In 2010, lawmakers extended those rules to all employees hired after May 21, 2010.

“Many of the towns we surveyed showed no awareness that these laws even existed,” said Walsh. “Legislators from throughout New Jersey thought they had reformed the state’s sick leave policies but the reforms have largely failed with these 60 municipalities and likely many more.”

The survey results showed 41 of the 60 towns studied made sick leave payments that ran afoul of those statutes between 2017 and 2021. That included 13 towns that continued to make annual sick leave payments, 22 that failed to enact the $15,000 cap, and 20 that breached the 2007 law from multiple directions.

OSC’s report, which acknowledge that there are no enforcement mechanisms in place to make sure towns are following the law, recommended that lawmakers should:

“Municipalities are willingly and unlawfully assuming substantial financial obligations that must be paid by today’s, tomorrow’s and future generations’ taxpayers,” said Walsh.

Additionally, OSC suggested individual towns retain an attorney to review existing policies and procedures that appear to be against the law. Towns would assess how much financial liability the town currently has or will have in the future and prepare a corrective action plan and send it to OSC for review by September 30.

Investigators urged towns to make the results public so taxpayers can track where their money is going.

“Funds that belong to taxpayers should be spent with the highest integrity and transparency,” said Walsh. “It is disappointing to see so many municipalities disregarding state law and wasting taxpayer funds.”