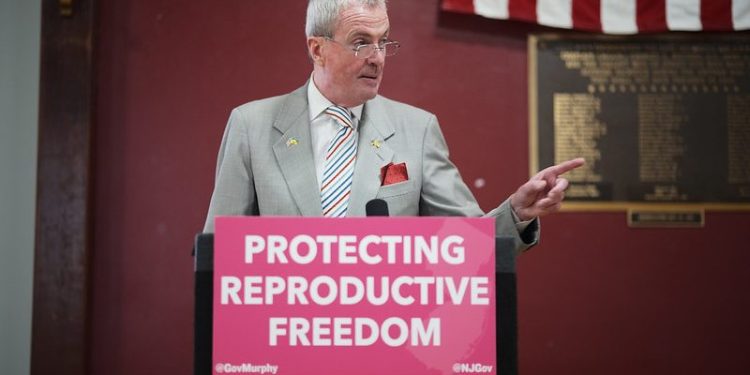 New Jersey’s top lawmaker is pushing for companies to relocate to the Garden State—using the Supreme Court’s ruling overturning Roe v Wade as part of his pitch.

Gov. Phil Murphy promoted the state’s abortion rights as an incentive for companies should relocate to New Jersey from more restrictive states.

The pitch came from Murphy in an op-ed that was published by the Houston Chronicle where he made a direct appeal to business in Texas.

“Abortion rights may not, on the surface, appear to be an economic issue,” wrote Murphy. “But the reality is that as more states move backward on individual freedoms, businesses can no longer sit silent. Individual rights and freedoms are an economic issue.”

The governor promoted New Jersey as “running forward” in taking the opportunity to enshrine abortion rights and reproductive freedoms within state laws. He compared that to Texas and other states across the U.S. that “are running backward and falling over themselves” in stripping away women of their individual rights and freedoms.

“For Texas companies uncomfortable with the restrictive and anti-freedom posturing of elected officials, instead of quietly figuring out ways to make end runs around state laws to provide abortion access to the women you employ, may I offer a solution: Come to New Jersey,” wrote Murphy.

The second term Democrat said workers and employers in New Jersey will find a state that “unequivocally stands on the side of trusting all of our residents with control of their bodies on the most personal of decisions. We firmly believe that is between a woman and her doctor to decide what to do with her own body. A woman’s right to an abortion is codified in state law. We are not going to criminalize a woman’s right to her body.”

Murphy cited his more than two decades in international business and finance in understanding that businesses make decisions on where to locate based on a host of factors.

“In this economic and social climate, the value of locating a business where employee values are protected—along with their basic individual rights, freedoms and health—cannot be overstated,” he wrote. “Businesses know that it is easier to recruit and retain top talent where employees can enjoy a high quality of life, greater opportunity and, yes, more personal freedom—including access to reproductive health care and abortion rights.”

The push comes as Democrats in New Jersey have passed legislation to protect a women’s right to choose as well as healthcare providers performing the procedures.

Murphy signed into law two bills recently barring a state medical provider from disclosing information about a patient seeking reproductive health services unless explicit consent is given and a second prohibiting the extradition of an individual to another state for actions related to reproductive healthcare services lawfully provided in New Jersey. ​​The legislation was pushed by New Jersey democrats after the U.S. Supreme Court upheld Mississippi’s attempt to ban most abortions after 15 weeks of pregnancy, overturning a decision by the New Orleans-based 5th Circuit Court of Appeals in Dobbs v. Jackson Women’s Health Organization that found the Mississippi law ran afoul of Supreme Court precedent by seeking to effectively ban abortions before viability.

Reproductive rights was not the only selling point for business to relocate to the Garden State that Murphy offered. He cited New Jersey be ranked by Wallethub’s as one of the Top 10 states in which to raise a family as well as U.S. News ranking the state first for education. Comparatively, Texas ranked 30th and compared 34th in the two rankings.

“This means that not only will your employees’ families find great schools for their children, including pre-K, it means you will also be able to find the highly-skilled workforce your business needs,” Murphy stated.

The governor added the state recently overhauled its entire package of available business incentives, with $14 billion available, as well an energy grid making New Jersey a much more competitive place for any business to relocate. He illustrated the point by offering New Jersey is home to and energy grid ranked 17 spots higher than Texas in terms of its reliability.

Murphy made the argument that businesses must be influential leaders on behalf of those who actually make a business successful: their employees.

“The reckless actions of closed-minded lawmakers, ignorant and hostile to the rights of their constituents, have a direct impact on the ability of any business to recruit and retain high-quality talent. Silence is no longer a viable option,” he stated. “No business can survive where the best candidates for its operations won’t want to live.”

The op-ed was published the same day a new Generation Lab/Axios poll  found more than six in 10 young women—and five in 10 young men—say states’ individual abortion laws will influence where they choose to live.

Noting that he does not expect any business to leave Texas overnight, the governor plans to send a letter to the CEOs of major corporations, asking them to consider those rights of their employees when making decisions about where to be located and how to use their corporate voice.

“With the criminalization of a woman’s right to her own bodily autonomy in Texas, it raises the question as to which individual rights state lawmakers will seek to overturn next,” said Murphy. “Marriage equality? Access to contraception? The ability of parents to support their transgender and LGBTQ children? None of these should be considered sacred and unassailable rights to any Texan anymore. But they are in New Jersey.”

Unilever, Ben & Jerry’s Go to Court Over Sales in Israel