Malinowski: Time for Saudi Arabia to Meet Our Demands

Congressman says Biden trip will be judged by Saudi actions, not talks 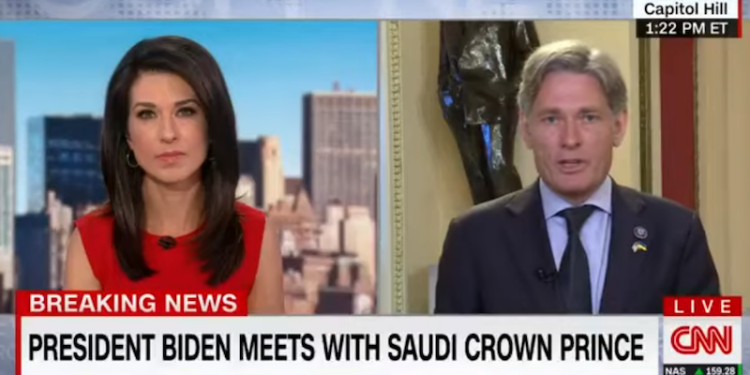 An outspoken critic of the Saudi Arabia regime, Rep. Tom Malinowski believes that the U.S. and the Biden Administration need to be tougher on their Middle East partner.

“The key question for me here is, does the United States jump through hoops to repair our relationship with Saudi Arabia? Or should it be on Saudi Arabia to jump through some hoops to repair their relationship with the United States?” said Malinowski. “I think it should be the ladder. We have a lot of cards, we should play them.”

The congressman’s comments came during a CNN interview on July 15, the same day President Joe Biden met for the first time with Saudi Crown Prince Mohammed bin Salman, also known as MBS. Biden, while he was the Democratic nominee, had promised to make the Saudi’s a “pariah” for the murder of Washington Post journalist Jamal Khashoggi and other human rights violations.

Biden received criticism from his own party for meeting with the MBS, who approved an operation to capture or kill journalist Khashoggi in 2018 in the Saudi Consulate in Istanbul, according to an U.S. intelligence report. Those criticisms intensified after the Saudi’s published a photo of Biden making a fist bump greeting MBS. The meeting with MBS was part of a Middle East tour that included a visit to Israel first.

Malinowski noted that President Biden has been completely honest “unlike his predecessor” about Saudi Arabia’s responsibility and the responsibility of MBS for the murder of Jamal Khashoggi as well as cutting off the sale of offensive weapons to Saudi Arabia.

But the 7th District Congressman conceded that he was not comfortable with the image of the meeting, making the Saudis look more powerful than their U.S. counterparts.

“I think it’s a time for the United States to show a little bit more strength in our relationship with Saudi Arabia. We are the superpower not the supplicant in this relationship,” he said. “And I want to make sure that whatever they’re discussing right now, we come out of this with the concessions that Saudi Arabia needs to make to right their relationship with us.”

Malinowski ridiculed the notion that the Saudi’s can receive the same amount of security from two other world leaders—Russia and China—than from their long time ally, the U.S.

“There’s sometimes talk about how the Saudis might… go to Russia, or go to China to help them with their defense. Well, good luck,” he stated. “Russia is not going to help Saudi Arabia. China’s not going to patrol the Persian Gulf, or have troops deployed to defend Saudi oil fields. Only the United States is going to do that for them. And I think that’s a card that we need to play.”

He later added, “Let’s remember that Saudi Arabia probably would not exist as a country without its defense relationship with the United States. We have done arguably more for Saudi Arabia and its neighbor, the United Arab Emirates, to help them defend themselves than we have done for Ukraine. And we’ve done a lot for Ukraine.”

Malinowski offered that the meeting was necessary due to Russia’s invasion into Ukraine that has resulted in rising prices for oil as well as addressing human rights issues that go against American values in person.

“There are some things we need from Saudi Arabia. Number one, they’ve got to do their part to stabilize the energy markets,” he said. “I think the most important issue right now in the world is the war between Russia and Ukraine…Saudi Arabia has not been acting like our ally in that conflict. In fact, in every important way they’ve aligned themselves with Russia by artificially keeping the price of oil high, hurting us, hurting American consumers and profiting themselves off of this terrible war.”

“On human rights, it doesn’t matter if it’s discussed in the meeting. What matters again, are the results. Will the President be able to secure the release of Americans who are still prohibited from leaving Saudi Arabia? Will he actually get the Saudis to institute real reforms to advance the rights of women and minorities and in that country?”

Malinowski offered that only time will tell if Biden’s decision to re-engage with MBS was the correct one.

“I hope the President gets these results from this trip. If so, I’ll give him full credit. But it has to be about results, not about meetings,” said the North Jersey lawmaker.