Tells fellow governors Americans not interested in partisanship, want solutions to their problems 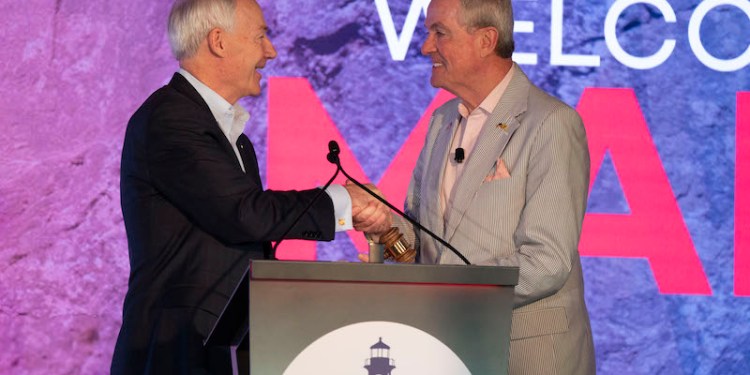 In taking the reins of the National Governors Association (NGA), Phil Murphy unveiled a mental health initiative he will be leading for the next year while reminding those in attendance that Americans do not care about party when it comes to making their lives better.

The unveiling of the Strengthening Youth Mental Health initiative comes amid an escalating youth mental health crisis experts say has been exacerbated by the coronavirus pandemic, according to Murphy.

A recent Centers for Disease Control and Prevention study found that 37% of high school students reported poor mental health during the pandemic and 44% reported persistent feelings of sadness or hopelessness.

“As challenging as the previous two years have been for us adults, we know the strain is nothing compared to what too many of America’s children were under,” Murphy said at the NGA meeting July 15. “The youngest have missed out on critical education and socialization opportunities during their most formative years. Pre-teens and teens missed out on milestones they’d looked forward to for the whole of their young lives – graduations, proms, sports, senior trips, and summer camps.”

“We know that the rates of stress reported by our young people are extraordinarily high. Now, I think we all remember how tough it was to grow up, and the educational, emotional, and other challenges we each faced,” stated Murphy.

“But I cannot imagine what it has been like for millions of American children who had the very notion of stability upended …We know there are many other children who were already falling through the cracks—children already living with a mental health challenge—and who the pandemic tried to swallow up whole.”

The initiative’s four core pillars include prevention and resilience building, increasing awareness and reducing stigma, access and affordability of quality treatment and care, and caregiver and educator training and support.

By advancing these key objectives, Murphy promoted the initiative as further support for success in and outside the classroom by acknowledging the relationship between mental health and academic growth, promoting the academic recovery of youths impacted by the pandemic.

“The youth mental health crisis knows no bounds—neither geographic nor political—and we must similarly transcend state borders and political divisions to protect our children,” said Murphy. “While it’s easy for us to say we’re getting back to normal, we know that road back has a few more twists and turns, and few more bumps, for those who may not have the ability to fully understand why they are feeling the way they do.”

Murphy’s announcement came the day before the new, three-digit National Suicide Prevention Lifeline became available in the Garden State and nationwide. The 988 number will be available for call, text, or chat starting this Saturday, providing easier access to the Lifeline network. The national network is comprised of over 200 local, independent crisis centers equipped to help those in need.

The governor noted that each state will find its own path to achieving the goals in his initiatives, with several states already pursuing some of these priorities through NGA programs.

“We have a good foundation upon which to build. And, as states are the ‘laboratories of democracy,’ so, too, are our states the laboratories for innovation. So, throughout the course of this year, I will welcome your ideas. I am eager to hear what works – and what doesn’t,” he said.

Murphy national initiative was the centerpiece of his speech in being named chairman of the NGA. But he did take a bigger picture view of the role that governors play in the political landscape when he quoted from his vice chair’s Gov. Spencer Cox (R-UT) 2021 State of the State Address that “there must be no room for contempt or hate. We are friends. We must always be friends.”

“He may have been speaking to his fellow Utahns, but he very well spoke for all of us,” offered Murphy. “I do not expect that, over the course of the next year, any of us are going to take off our hats as either ‘Democrats’ or ‘Republicans.’ In fact, I know we each wear these hats, and the respective underlying ideals they espouse – with great pride.”

“But I ask that we endeavor to look below these hats—and at each other’s faces—and recognize that we are partisans third, governors second, and Americans first and foremost.”

The second term governor argued that the majority of Americans want their elected officials to find common ground in an effort to find solutions to their problems.

“To be honest, most of our constituents don’t really care what party we represent. They elected us to deliver solutions. They asked us to lead our states to make their lives, and those of their families and neighbors, a little better,” he said.

Murphy succeeded Gov. Asa Hutchinson (R-AR) as NGA Chairman, with whom the New Jersey governor collaborated on several issues, including supporting infrastructure investment, promoting STEM education, and working to prevent mass shootings. The New Jersey lawmaker concluded that as governors, one of their most important and sacred responsibilities is to our nation’s children.