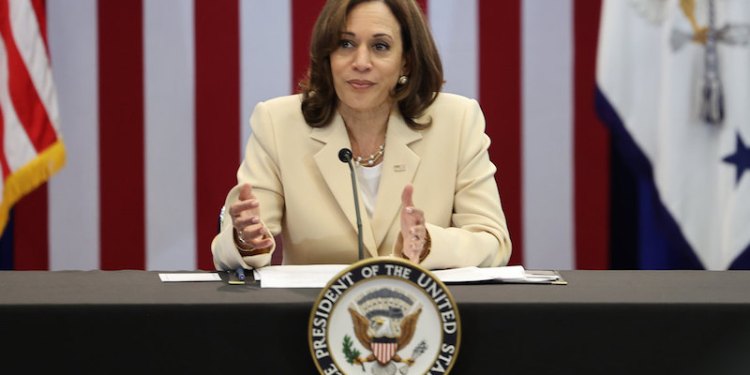 The House delegation from North Jersey recently voted on two bills to ensure abortion rights in the U.S. as Vice President Kamala Harris praised state officials for their work to allow for choice when it comes to reproductive health.

The votes preceded the visit of Vice President Harris to Atlantic City for the NAACP convention being held this week. Harris, during a speech to delegates and in a roundtable discussion with New Jersey lawmakers, told those assembled that steps must be taken to protect fundamental freedoms, “including the freedom for a woman to make decisions about her own body.”

The Vice President noted that in her travels and conversations across the U.S., she has been looking for national models of what is working in the face of what’s not working.

“The legislators who are here today, and the attorney general, have been doing model work here in New Jersey in protecting a woman’s ability to make decisions about her body,” said Harris on July 18.

“What we are seeing around the country are extremist so-called leaders who are passing laws with the intention of criminalizing public health professionals, punishing women for making decisions that are intimate, private decisions that should be protected, in terms of the privacy and the autonomy with which women should be able to live and have the power over the most intimate issues that could affect their lives.”

The former California Senator opined that the fight for individual freedoms will not only be decided at a national level, but at down ballot in state and local elections.

The panel, which included New Jersey Attorney General Matthew Platkin, State Senate Majority Leader Teresa Ruiz (R-29) and Assemblywoman Mila Jasey (D-27), was the fourth conducted by the Vice President following those in with state legislators at the White House; in Orlando, FL and Philadelphia.

The visit by the Vice President comes just days after the Congressional lower chamber voted on July 15 to pass the Women’s Health Protection Act of 2022 and the Ensuring Women’s Right to Reproductive Freedom Act in response to the recent Supreme Court decision that reversed Roe v Wade.

“When the partisan Supreme Court struck down 50 years of legal precedent, they stripped women of our constitutional freedoms and put our health at risk,” said Rep. Mikie Sherrill in a press statement after the vote. “In states like New Jersey, we have already stood up to ensure that the court’s extremist views do not restrict the freedom of our residents. But we cannot forget about women in places like Texas or Mississippi where state legislators are controlling residents and acting to punish them for seeking healthcare.”

The Women’s Health Protection Act of 2022 guarantees the right to reproductive health care for all Americans, regardless of state laws to limit it. The bill gives health care providers the right to provide it without unnecessary restrictions.

The proposed legislation, which codifies the right to an abortion in federal law, was passed by the House in September 2021. Legislators noted that because of the U.S. Senate failing to act on it, the House passed the bill with language addressing the current events to pressure the other chamber to do their duty and protect freedom.

“I will always oppose any attempt by those in Washington or around the country to roll back the clock and stand between a woman and her doctor, or her faith, when making personal, private health care choices,” said Rep. Josh Gottheimer. “Last month, the Supreme Court made a devastating and extreme decision to overturn a woman’s right to choose — in a horrific breach of personal privacy and freedom that puts a woman’s life and health at risk. Now, the House is passing critical protections to defend a woman’s right to make her own health decisions.”

The second bill, the Ensuring Women’s Right to Reproductive Freedom Act, will prohibit any attempt under state law to impede a woman from crossing state lines to access health care; interfere with a health care provider’s ability to offer legal care; restrict individuals from helping others to seek health care; and obstruct the transportation of FDA-approved medication.

A Right to Choose

Gov. Phil Murphy signed into law two bills this month barring a state medical provider from disclosing information about a patient seeking reproductive health services unless explicit consent is given and a second prohibiting the extradition of an individual to another state for actions related to reproductive healthcare services lawfully provided in New Jersey.

The federal bill empowers the U.S. Attorney General to bring civil actions in cases where a person is prevented, restricted, impeded or retaliated against for traveling across state lines to obtain a lawful abortion.

“Women should have the right to determine their own health care choices without any government interference,” said Rep. Donald M. Payne, Jr. “The recent Supreme Court decision to remove this right from women is a travesty.  These two bills would return that right to women and make it federal law so no one could take it from them again. Women should be the only ones to determine the best reproductive care options for their health and safety.”