Sen. Menendez Pushes Back at GOP Over Spending on Gateway 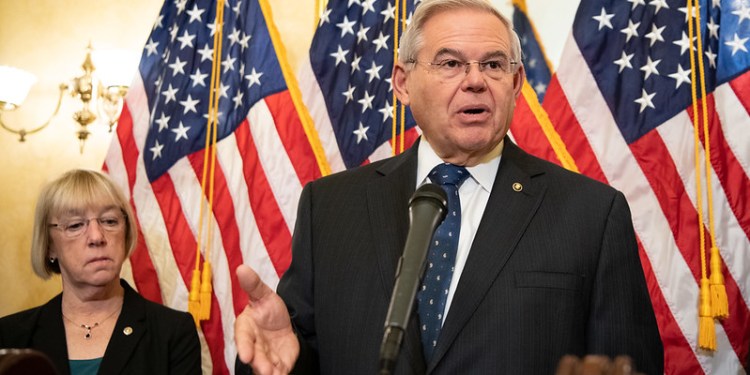 Appearing as a recent committee hearing on public transportation, U.S. Sen. Bob Menendez referred to the Gateway Project as being of “national significance” to the country and refuted a GOP Senator from a neighboring state that questioned the need for the investment with ridership declining.

The 68-year-old senior member of the Senate Banking, Housing, and Urban Affairs Committee outlined the critical need of completing the Gateway Project, along with building a new Portal North Bridge and Hudson River rail tunnels.

“Broadly, Gateway aims to modernize the rail infrastructure along a 10-mile segment of the Northeast Corridor connecting New Jersey to New York Penn Station,” said Menendez during the hearing.

“This critical stretch of track carries over 200,000 daily Amtrak and NJ Transit passenger trips on approximately 450 trains and is a linchpin of the entire Northeast Corridor—a region that accounts for 20% of our national GDP,” he added

Appearing as a witness at the committee hearing was Federal Transit Administration (FTA) Administrator Nuria Fernández, who agreed with Menendez’s assessment that the Gateway Project is of “national significance” to the country, in that the Northeast Corridor is responsible for one-fifth of the nation’s overall economy.

The current Hudson River rail tunnels were badly damaged by “Superstorm Sandy” in 2012 and will require extensive repairs in the coming years. The Northeast Corridor (NEC) Commission warns if another devastating event should occur within the region that forces officials to take those rail tunnels offline without any replacements, the economic impact along the entire corridor would be catastrophic.

Amtrak estimates that an unexpected shutdown of the Northeast Corridor could cost the U.S. economy nearly $100 million per day.

But questions about the expenditures for the project were raised by Sen. Pat Toomey (R-PA), wondering if the need for such strong federal support concerning the project in light of the current low mass-transit commuter numbers of individuals returning back to the workforce following the pandemic.

Menendez responded to Toomey’s question by highlighting a recent report by the Regional Planning Association that validated the continued need to reinvest in the Gateway Project.

The report found that daily trans-Hudson ridership would return or perhaps even exceed pre-pandemic levels by the time construction is completed on the Hudson River tunnels. The report calculated an increase of roughly 15 to 32 percent by the year 2050.

Menendez continued stating: “So yes, our transit agencies, like other industries, were hit hard by the pandemic, but the fact remains that transit will remain a vital and growing part of our transportation mix, and I’m proud of the much-needed investments that the Bipartisan Infrastructure Law makes in modernizing our transit systems.”

The project received an extra boost recently as both New Jersey and New York signed a “Memorandum of Understanding” which details sources, uses, and deadlines for funding the project on behalf of the two states, which moves the project another step forward towards completion.

On the federal level, the Biden Administration under the Capital Investment Grants (CIG) program announced that the Gateway Project/Hudson River Tunnels has received an upgraded rating from a “medium-low” under the Trump Administration, to a “medium-high” making the project eligible to move forward.

The upgrade was applauded earlier this year by both Sens. Menendez and Cory Booker, allowing President Joe Biden the opportunity to include the project within the FY23 budget request.

“This is a major step towards completing the nation’s most important transportation project, which will modernize our rail infrastructure, get commuters to work, and keeps our economy moving forward,” said  Menendez.

The Hudson County lawmaker singled out President Biden, Transportation Secretary Pete Buttigieg, and Fernandez for their support of the tunnel project.

“After years of politically motivated delays to derail Gateway by the former administration, I now could not ask for better federal partners who are committed to building new Hudson rail tunnels, completing the Portal North Bridge, and getting the entire Gateway Program Done,” he said. “I will continue working with the project’s sponsors and our federal, regional and state partners to ensure we reach our goals and finish the Gateway Project.”

According to the agreement, the FTA will allocate $766.5 million in CIG funding.  An additional $57.1 million will be provided through the Federal Highway Administration’s  Congestion Mitigation and Air Quality Improvement  program towards the $1.8 billion project. The balance of funding will include $811 million  New Jersey has committed to the project and $261.5 million from Amtrak.