Will require licensing for police statewide under Police Training Commission 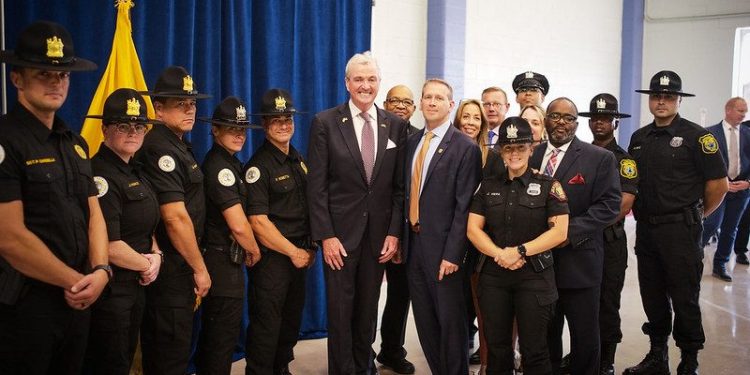 Gov. Phil Murphy signed into law a bill that will require statewide police licensing under the Police Training Commission (PTC).

“This police licensing program will, formally and finally, recognize all who serve in law enforcement in our state as the specially trained and highly skilled professional they are,” said Murphy at a signing ceremony July 21 in Secaucus. “Officers holding these licenses will be proven professionals who fulfill their duties with honesty and integrity, helping law enforcement strengthen and rebuild the bonds of trust between police and residents in the communities they serve, especially in our Black and Brown communities.”

The bill requires all police officers across the state to hold a valid and active license as issued by PTC. More than 40 states had already implemented similar legislation.

“This landmark legislation will have real and transformative impact on policing in New Jersey, and will serve to significantly improve trust between law enforcement and the public they are sworn to protect,” said Acting Attorney General Matt Platkin. “One of the strongest commitments of the Murphy Administration has been to ensure the continued excellence and success of New Jersey’s law enforcement officers, while promoting a culture statewide of professionalism, transparency, and accountability.”

Murphy stated that while he likes to boast when New Jersey was leading the nation, that was unfortunately not the case in this matter. The upside, he argued, was the ability to learn from their implementation plans to develop a more comprehensive legislative package.

“I know that most New Jersey residents will be proud to join 46 states in these United States to require Law Enforcement Officers to be licensed like the many professionals in their communities,” said Reva Foster, President of NJ Black Issues Convention.

The governor noted professional licensing was needed in various other contexts, including teachers, doctors, electricians, and counselors. He said these requirements helped to assure the public an appropriate professionalism, qualification, and accountability.

PTC, formed in June 2020, was tasked with establishing statewide enforcement standards for police.

The commission is now charged with establishing the licensure process and qualification standards for officers and applicants. Among those are passing a psychological examination; maintaining post-academy and ongoing professional training requirements; and not engaging in conduct including social media posts or being an acting member of violent groups

All police officers in the state would need to be licensed, and licenses will be subject to renewal three years after issuance. PTC would be able to suspend, revoke, place conditions upon, or deny licenses after a hearing.

Cause for Licenses Being Revoked

Conduct resulting in the revocation or non-issuance of a license include:

Law enforcement agencies in New Jersey will be required to share specific information on police officers that could impact their ability to perform their duties with PTC.

The legislation had the approval of some of the largest police organizations in the state.

“This is yet another piece of legislation that we have all worked on together to enhance transparency and promote public trust and confidence in our troopers and all law-enforcement,” said Wayne Blanchard, President, State Troopers Fraternal Association. “This bill enhances the concepts of producing a more professional and better trained police officer while incapacitating bad actors for which we have no tolerance.”

Licensing has been an issue pushed for by Black lawmakers and activists as a way to create a better relationship between communities of color and the officers that serve and protect them.

“Professional licensure will greatly help ensure law enforcement officers uphold the public trust by maintaining high standards of training and proficiency,” said Assemblywoman Verlina Reynolds-Jackson (D-15). “The job of law enforcement is as critically important to our communities as the work of doctors and lawyers. This law will raise the level of professionalism that is required to serve our communities in any situation.”

“The Police Training Commission will have the ability to better monitor officers and take the appropriate action against those who engage in improper conduct under established licensure standards,” said Assemblyman Benjie Wimberly (D-35). “This law is a step toward rebuilding trust in our communities.”