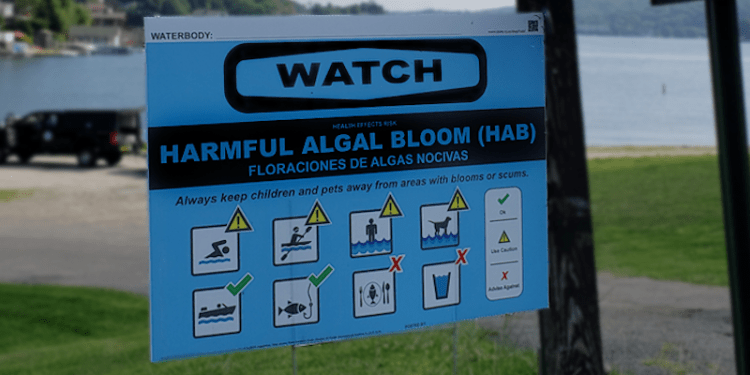 The presence of a harmful algae bloom (HAB) at Lake Hopatcong was confirmed by the New Jersey Department of Environmental Protection (NJDEP), leading to an advisory for visitors to the lake.

The sample was the first this season on any part of the lake to exceed the less severe “watch” threshold. HABs can cause illness in humans and animals, with children and pets the most vulnerable as they ingest more water in relation to their weight, according to NJDEP.

“Exposure to cyanobacteria cells can cause a range of mild to moderate health effects, including rashes, allergy-like reactions, flu-like symptoms, gastroenteritis, respiratory irritation and eye irritation. Incidental ingestion of water containing the toxins these bacteria can produce, known as cyanotoxins, can result in more serious health effects such as liver toxicity and neurological effects,” the agency wrote on its website.

The warning asks visitors to refrain from activity that involved direct contact with water, like swimming, and for those engaging in secondary contact (i.e. fishing, boating) to use extra precautions to prevent contact with the water.

Colleen Lyons, who serves as administrator of the Lake Hopatcong Commission, noted it remained unclear whether the beach would close as the sample was taken from the middle of the cove.

While the advisory was the first in New Jersey for 2022, across the border in Rockland County, NY, Harriman State Park’s Lake Welch remained closed due to an HAB as of July 21.

Federal, state and local officials have prioritized fighting HABs over the past couple of years as lakes have been forced to close during the Summer, a crucial economic time for the communities. The Murphy Administration earlier this year allocated $10 million to fund projects ranging from stormwater runoff prevention to conservation efforts that will help fight off harmful algal blooms that have wreaked havoc over the last couple of years in North Jersey.

To that end, Rep. Tom Malinowski recently secured nearly $200 million from the EPA to combat HABs, citing Lake Hopatcong by name in announcing the funding. The congressman said the funding was approved as part of the fiscal 2023 Interior-Environment appropriations bill, which included $44.8 billion to confront the climate crisis.

Malinowski highlighted other funding allocations from the bill, including $10 million to conserve land within the Highlands Region; $126 million for scientific and regulatory work on per- and polyfluoroalkyl substances (PFAS) needed to establish drinking water and cleanup standards; and $1.31 billion to clean up the nations most contaminated Superfund sites; among other projects.

“I’m glad the House has heeded my call to provide this funding, and I look forward to working with municipal governments and the state to ensure it’s used effectively,” said Malinowski.