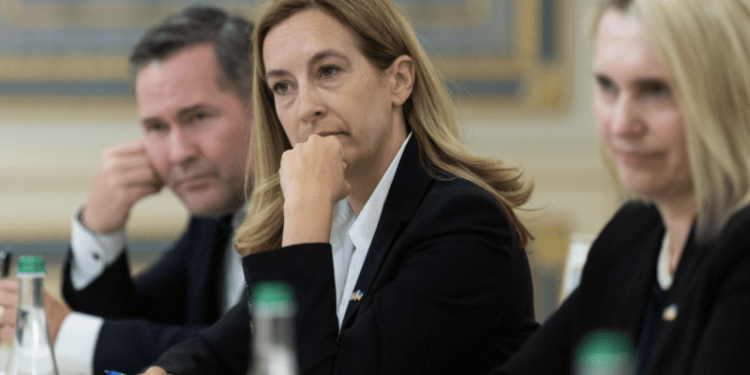 Rep. Mikie Sherrill last week saw first hand how the Russians are not keeping their word in an international accord less than 24 hours it agreed to one.

Sherrill was part of a bipartisan Congressional Delegation (CODEL) visit to Ukraine and was meeting with President Volodymyr Zelenskyy the day after Turkey brokered a deal between Ukraine and Russia July 22 securing the transit of millions of tons of grain through Black Sea routes.

But Russia proceeded to launch a strike that resulted in a string of explosions that rocked Ukraine’s southern city of Odesa on July 23, hitting one of the country’s most important ports.

“We received the good news yesterday that a deal had been reached to allow the Ukrainians to safely ship grain free from Russian interference,” said Sherrill in a press statement July 23. “Just hours later Russia inexplicably bombed the Ukrainian port city of Odessa—directly contrary to the deal they had just reached.”

“I was proud to join this bipartisan delegation to reaffirm the United States’ unwavering commitment to Ukraine and its fight for democracy and freedom,” stated Sherrill, who noted that besides meeting with Zelenskyy the CODEL heard from Defense Minister Oleksii Reznikov, Foreign Minister Dmytro Kuleba and mayors from Irpin and Bucha.

But Sherrill kept the focus on the actions of Russian president Vladimir Putin and the invasion of Ukraine now starting its sixth month. The Montclair resident is a graduate of the U.S. Naval Academy and served in the Navy for almost 10 years as a helicopter pilot and Russian policy officer.

“Putin’s war is contributing to surging global prices that Americans are feeling at the grocery store and the gas pump,” she said. “This trip reaffirmed what we all know to be true—the Ukrainian people have shown bravery and resolve second to none, despite atrocities committed by the Russian military and a looming food crisis.”

Besides the destruction the Russian invasion has caused on Ukraine, Sherrill noted the ripple effect it has had on the world economy and in North Jersey in her visit that included meetings with US Ambassador Bridget Brink and members of the 101st Airborne division.

“I am committed to taking every step possible, including working to ship Ukrainian grain, strengthening our supply chains, and diversifying agricultural imports, in order to bring the costs down in NJ-11 and fend off the looming humanitarian crisis around the world.”