Pascrell: Springsteen Fans ‘Held Up Without a Gun’ by Ticketmaster 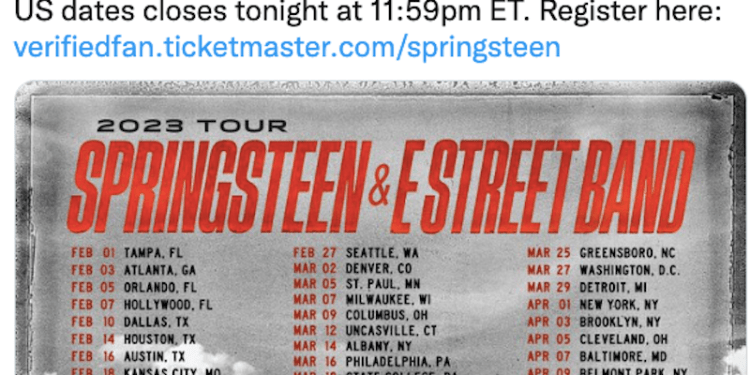 As North Jersey fans get ready to go online to get tickets to one of the five area shows Bruce Springsteen next Spring, one lawmaker is saying those attempting to get to one of the shows are being “held up without a gun” by Ticketmaster.

That’s according to Rep. Bill Pascrell, who lamented prices that reached as high as $4,000 per ticket.

“After the long hiatus, we are all excited that Bruce is going back on tour. But Americans have the right to enjoy some live entertainment without getting ripped off,” Pascrell said.

Pascrell noted that he and colleagues were receiving complaints from “irate customers who are fed up” despite the fact the New Jersey and New York dates for the tour didn’t even go on sale yet.

“Fans should know exactly what they are getting into before getting involved with an always high stress concert ticket sale. And I hope that these policies and prices are reconsidered, or at least better publicized to fans, before the bulk of the concert dates go on sale next week,” he said.

As tickets are set to go on sale July 29 for North Jersey shows at Madison Square Garden (April 1), (Barclays Center April 3), the UBS Belmont Arena (April 9 and 11,) and the Prudential Center (April 14), Ticketmaster defended its dynamic pricing model, arguing the vast majority of tickets sold for $200 or less.

Dynamic pricing, or “platinum seats,” enables supply-and-demand pricing for live event tickets, according to the company. Ticketmaster said it was much like how airline tickets and hotel rooms are sold.

Ticketmaster noted 88% of Springsteen fans were able to acquire tickets at face value, with prices ranging between $40 and $399 for most arena shows before service fees. This averaged to about $202 per ticket.

In a statement July 26, Springsteen’s manager Jon Landau offered that the Springsteen camp had looked carefully at what his peers have been doing in pricing tickets for this tour.

“We chose prices that are lower than some and on par with others,” said Landau. “Regardless of the commentary about a modest number of tickets costing $1,000 or more, our true average ticket price has been in the mid-$200 range.”

“I believe that in today’s environment, that is a fair price to see someone universally regarded as among the very greatest artists of his generation.”

Despite Ticketmaster and Landau’s reasoning, Pascrell argued the multi-billion dollar live events ticket marketplace was crying out for reform, and pointed to The BOSS Act legislation he had previously introduced.

Pascrell first targeted Ticketmaster a decade ago when it forwarded Springsteen fans to their ticket reselling site instead of their box office to increase priced and opposed the Live Nation-Ticketmaster merger, writing in May 2018 in favor of imposing greater regulation on the live events ticket market.

“They continue to remind us that the unholy Ticketmaster-Live Nation union should be broken up by the DOJ and FTC once and for all,” he said.